Can Will Ferrell's cruelty save "The Office?"

Last night's episode is a reminder that Dunder Mifflin has been sorely lacking in one quality: Malice 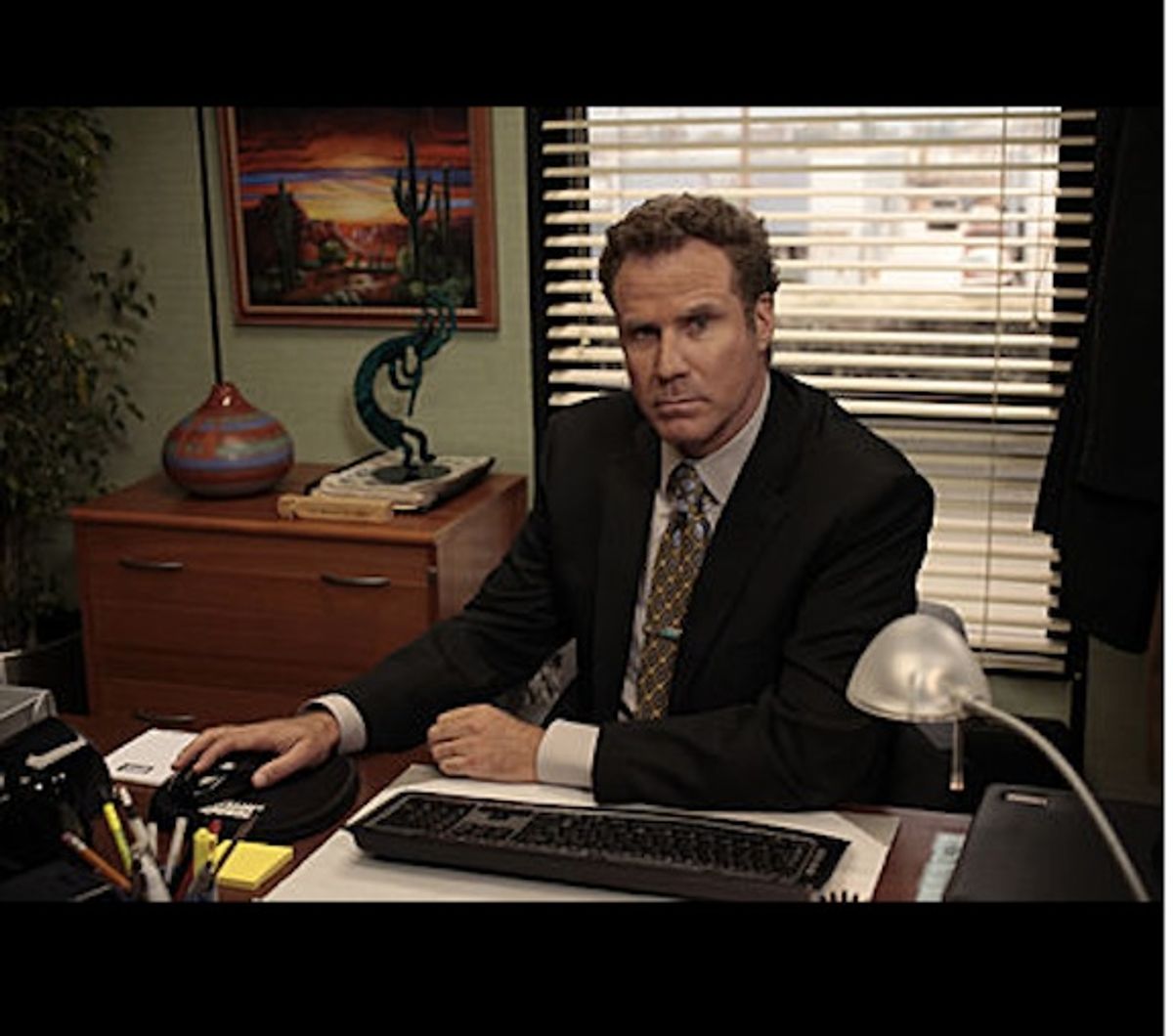 Painfully funny: Will Ferrell on "The Office"
--

Last week, Steve Carell began his three-week departure from NBC's "The Office," a move that has many critics (and cast members) wondering if the show can survive. Despite good ratings, the past two seasons of "The Office" have been limping along without a clear focus. With Jim and Pam together (with a kid, no less), the driving motivation of the original British series has ended, and "The Office" has begun to meander, looking for its next interoffice romance to become the crux of an aimless show. Watching "The Office" has become almost as monotonous as going to one. Why? Because just like a real office, everyone on the show has stopped being real and started being polite.

While season one of the American "Office" tried to mimic the storylines from its BBC namesake program, the ratings had tumbled by the time of its season finale. Turns out, our audiences only like painfully awkward confrontations during prime time news or on shows about hoarding. Scripted comedies? Not so much. (Though Larry David and "Curb Your Enthusiasm" may beg to differ.)

The second season of the American "Office" barely resembled the first. In season two the characters were -- if not nicer, necessarily -- not as blatantly cruel. They also became more nuanced: Michael was something of a savant as a salesman and began an affair with his disapproving boss, Jan. (Something his British alter ego David Brent could have never pulled off, which was sort of the point of the original series.) Two side characters originally meant to be unlikable, Dwight and Angela, fell for each other and became more well-rounded. Jim finally stood up for himself and kissed Pam. "The Office" became the thing it originally opposed: A romantic portrait of desk job drudgery.

Now in season seven, we know these characters as if they were our own family, and when they are mean to each other, we know they will make up by the episode's end. Why? Because they are a family, with the goofy but loving Michael Scott as the bumbling patriarch. How could the show go on without him, especially when we don't even know who his replacement will be? (Will Ferrell has come on for a four-episode transitional period, and Jim Carrey will "cameo" in the season finale, but neither actor has been announced as the new boss in Scranton.)

Here's how "The Office" could succeed, even flourish after Carell's departure: It could go all the way back to its Schadenfreude roots and get mean. Despite mixed criticism for Ferrell's role last week as temp boss Deangelo Vickers, I thought parts of his performance shined with something we hadn’t seen on the show since Andy first showed up as Dwight's nemesis: actual cruelty. Deangelo, while encouraging to some (Michael in particular), also showed a malicious side, turning Andy into the office "clown" and making him drink soap.

Deangelo also took an instant dislike to Pam and Jim, when they tried to brown-nose their way into his good graces by using their child as bait. Which, come on, is exactly what this entire show has been lacking for a while now: someone to see these two eye-rolling protagonists for who they really are. Jim and Pam aren't just irrelevant to "The Office," they've become almost unlikable. The show is stuck between treating them as the main characters and recognizing that most of America thinks they're dull at best, pathetic at worst.

Last night's episode introduced some of the most cringe-inducing moments since the show's inception: that blink-and-you'll-miss-it moment when Jim leaves the car for Pam to talk to Erin, because he found her love problems "totally boring"; Pam losing the Best Mom award at the Dundies while Jim gloated over his Best Dad award; Michael's digs at Angela's boyfriend being a state senator (an uglier moment than the times Oscar has pointed out this same fact, if only because Michael was saying it to an audience of spectators). And the coup de grâce of public humiliation: Erin breaking up with Gabe during her "thank you" speech. It was the first time in a while that Jim's trademark "Can you believe this?" mug to the camera actually made sense. It was an awkward, unpleasant moment to watch. It was also brutally funny.

If "The Office" can continue down this path – after the inevitable "Goodbye Michael!" singalongs – and reveal a darker side to characters who have been defanged over too many episodes, it may have a chance of surviving post-Carell. Or maybe the employees of Dunder Mifflin/Sabre will continue to hold hands and play nice. If so, "The Office" will lose its pop culture relevance faster than jokes about "The King's Speech."