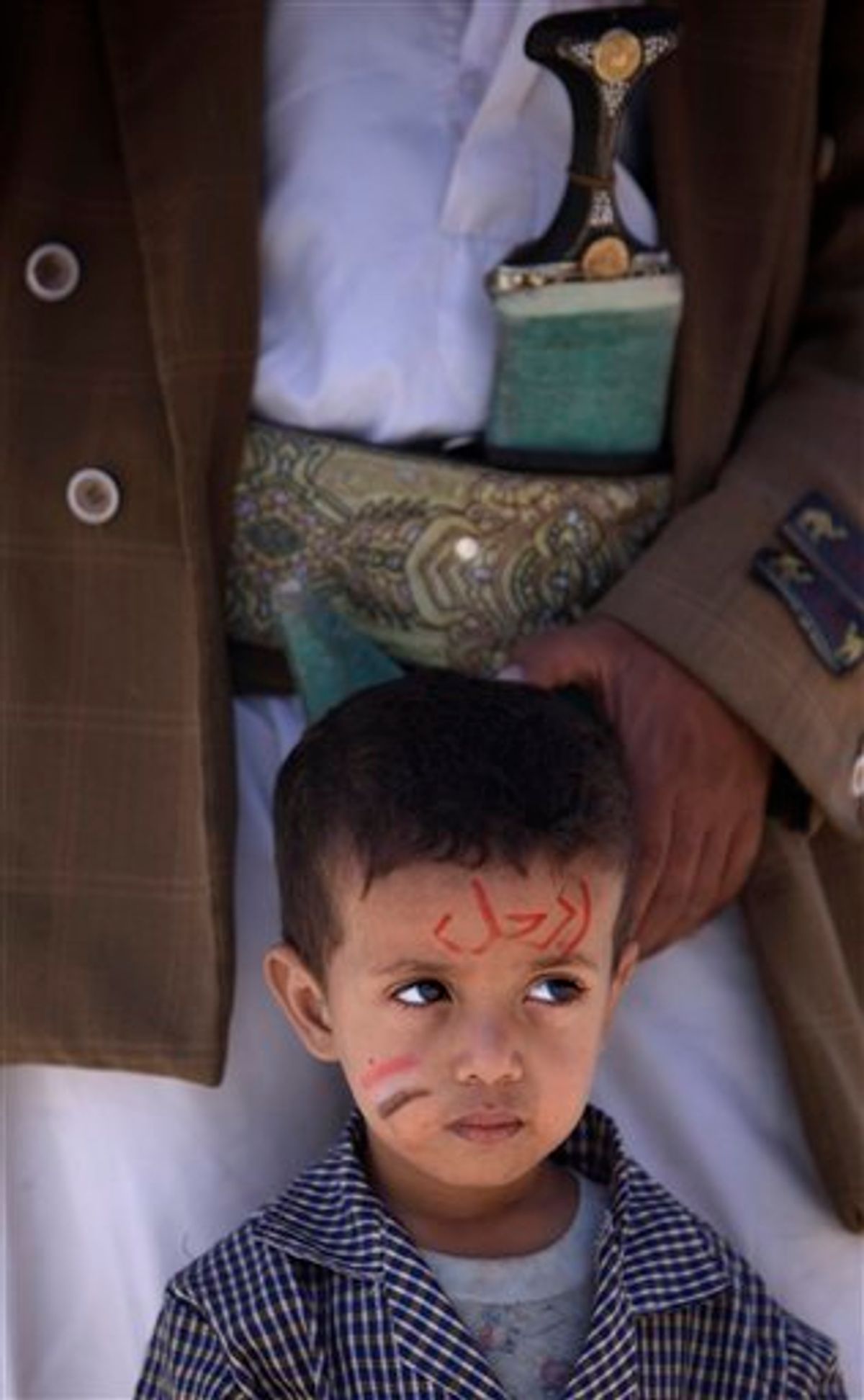 A Yemeni boy with writing on his face in Arabic which reads, "Leave" stands with his father during a demonstration demanding the resignation of Yemeni President Ali Abdullah Saleh in Sanaa, Yemen, Thursday, April 21, 2011. The head of a regional Gulf Arab political group was in Yemen on Thursday to lead a fresh effort to find a way out for the country's embattled president who has faced two months of mass protests demanding his ouster. (AP Photo/Muhammed Muheisen) (AP)
--

Authorities in Yemen have moved against military figures who defected from the camp of the country's embattled president to join the opposition, arresting several officers on Friday, according to a military official.

The arrests followed a demonstration at al-Anad air base in the southern Lahj province on Tuesday, where dozens of soldiers and airmen joined the calls for the president to step down, said the military official, who spoke on condition of anonymity for fear of reprisals.

The official, who holds the rank of a colonel, said several senior officers were detained but would not elaborate.

Human rights groups have said that at least 58 activists and opposition supporters have been detained in the past three weeks, including more than 20 protesters who were injured in clashes with police in Sanaa on Saturday.

Lawyer Abdel-Rahman Berman from the HOOD rights group said two women protesters were abducted on Tuesday by female security agents who forced them into a black car without license plates but a government symbol on its rear window.

Meanwhile, opponents and supporters of Yemen's embattled president marched in cities and towns across the nation for rival rallies after Friday prayers.

In the capital Sanaa and elsewhere, hundreds of thousands chanted against Saleh, while renegade military troops made up defectors provided security to the opposition demonstrations.

The demonstrators wore loyalists badges depicting Saleh, or showing the president and his son who runs the Republican Guard, or badges of Saleh and a nephew who commands the special presidential forces.

Rival rallies for and against Saleh have taken place every Friday since massive street protests against his 32 years in power broke out in mid February, inspired by uprisings across the Arab world.

In the southern city of Taiz -- an opposition hotbed -- a massive crowd also gathered Friday to demand Saleh step down.

Reinforcements of Republican Guard units and special forces were deployed in positions overlooking the protest in Sanaa, as well as around the Foreign Ministry and sensitive military headquarters.

Opposition activist Walid al-Ammari said Friday's demonstration, with the participation of huge number of women, was "a message to this ruler (Saleh) to step down immediately without any promises of immunity from trial."

Saleh and the opposition are considering a Gulf Arab nations' proposal to end the country's crisis.

The draft calls on Saleh to hand over power to a successor of his choice and leave within a month, safe from the possibility of prosecution. The opposition wants him to leave immediately and the talks with the Gulf Cooperation Council representatives have failed to break new ground.

Saleh has over the past two months used violence to try to quell the unrest, with his security forces killing nearly 130 protesters so far. He has also offered concessions, including a pledge not to run again for president or allow his son to succeed him, but to no avail.