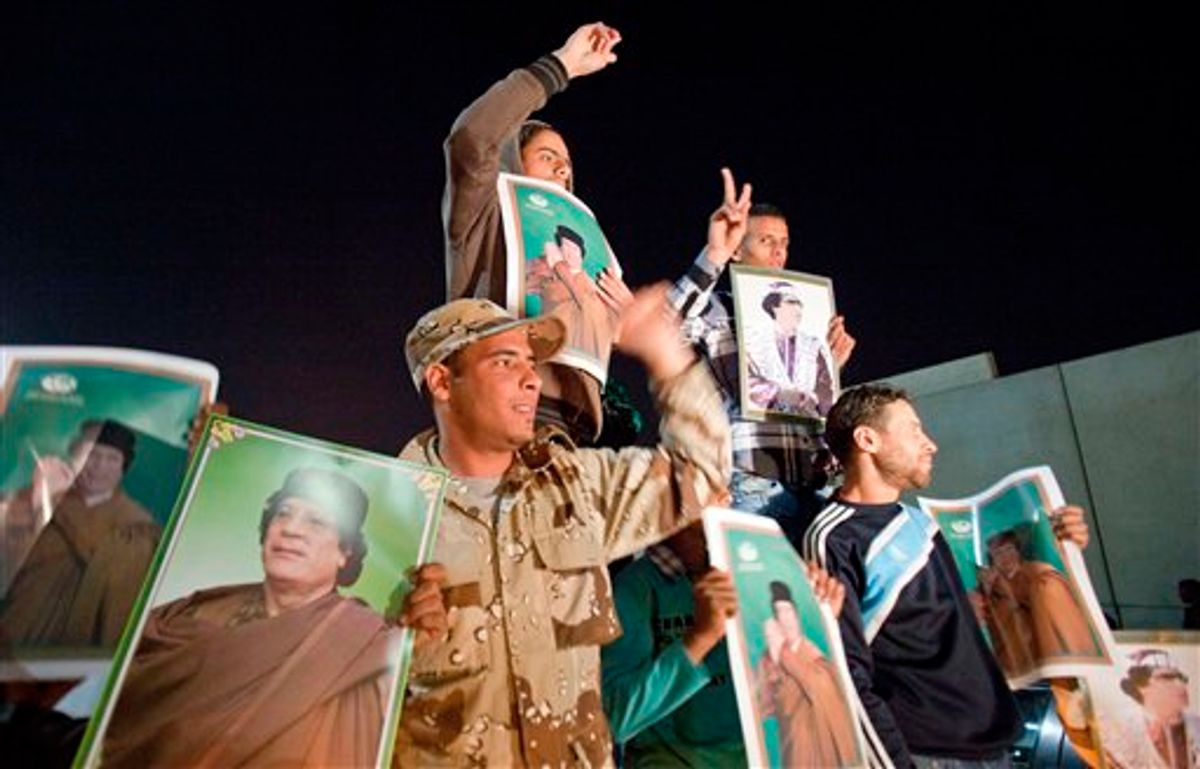 On the other side of the country, a rebel commander said NATO aircraft destroyed more than two dozen trucks and cars carrying Gadhafi's forces not far from the contested city of Ajdabiya.

Reporters were taken to an unpaved plot next to the Bab Aziziyeh compound and shown two craters, apparently from the missiles that had pierced through thick layers of reinforced concrete, laying bare what looked like a bunker system.

About two dozen Gadhafi supporters arrived at the scene, waving green flags in support of the Libyan leader.

Libyan officials said the lot served as a parking lot but a series of olive-colored metal boxes near the crater suggested the area was being used for military activities.

NATO stepped into the Libyan fighting in mid-March, unleashing airstrikes against Libyan military targets as part of a U.N. mandate to protect Libyan civilians.

Rebel battalion commander Col. Hamid Hassy said NATO aircraft destroyed 26 government pickup trucks and sedans, but otherwise there hasn't been much fighting today between Gadhafi forces and the rebels. The front in the east has been stalled between the oil town of Brega and Ajdabiya for weeks.

A senior Libyan government official, meanwhile, said late Friday that the military is withdrawing from one of the fiercest battles in two months of fighting, over the western city of Misrata. Libyan forces have besieged the rebel city for nearly two months, with rebels defending positions in the port area.

Earlier this week, rebels took over several highrise buildings in downtown Misrata, driving out dozens of Libyan army snipers who witnesses say had been firing from high ground at residential areas.

In another boost for the rebels, the U.S. dispatched Predator drones to Libya earlier this week. The unmanned drones, which can swoop low, have been used in Afghanistan to hunt and kill militants, and are suited for urban combat.

Deputy Foreign Minister Khaled Kaim said tribal leaders have given the army an ultimatum, saying it must step aside if it cannot retake control of Misrata.

The tribal leaders would fight the rebels if they don't surrender, Kaim said late Friday night.

Asked if that meant troops would get out of the way, he said: "This is how I imagine it would happen." However, he said negotiations between the military and tribal leaders are continuing.

Kaim did not say when the military would pull back from Misrata or when the armed tribesmen would move in. "We will leave it for the tribes around Misrata and the Misrata people to deal with the situation in Misrata," Kaim told reporters.

Having tribesmen take up the fight in Misrata could make it harder for the Predators to distinguish them from Misrata's civilians or the rebels.

Hundreds of people have been killed in clashes between rebels and government forces in the city of 300,000.

The international community has accused Libyan forces of firing indiscriminately at civilian areas with tanks, rockets and mortars.