The vindication of P.J. Crowley 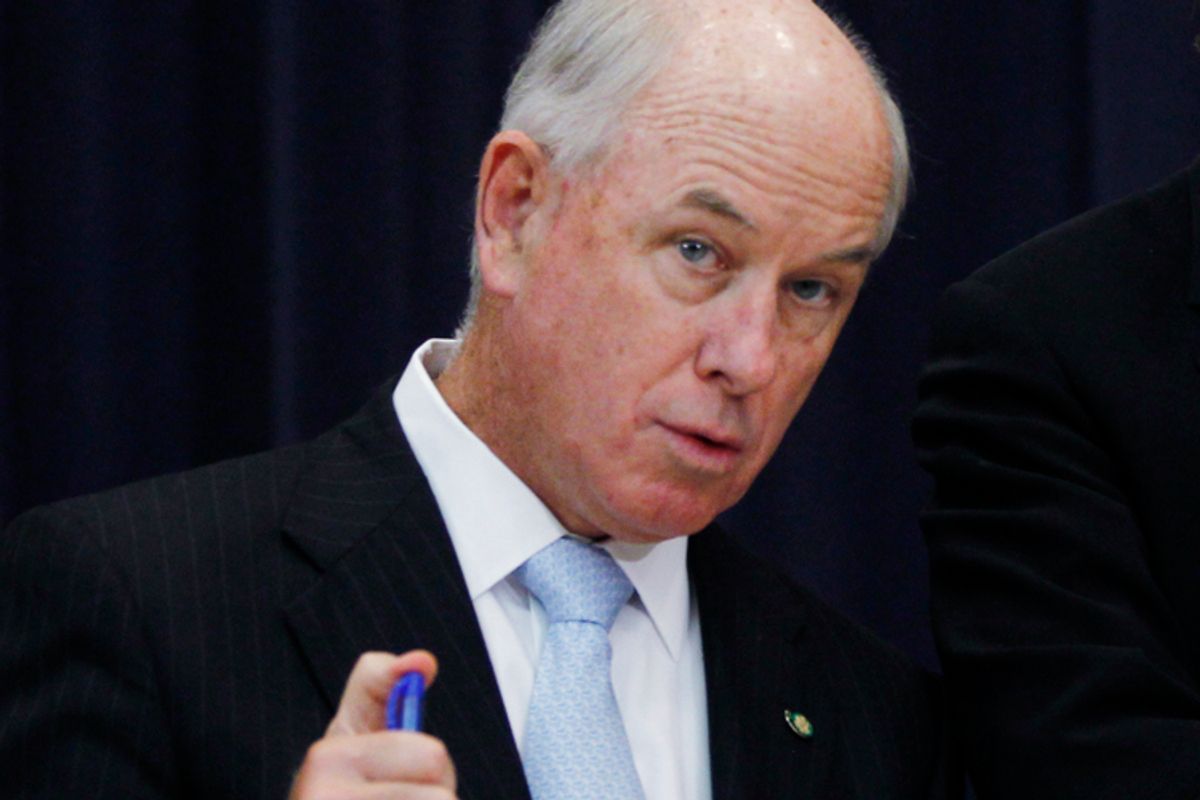 In this photo taken Sept. 2, 2010, State Department spokesman P.J. Crowley speaks to reporters at the State Department in Washington. Crowley has resigned after causing a stir by describing the Army's treatment of the suspected WikiLeaks leaker, Pfc. Bradley Manning, as "ridiculous" and "stupid." In a statement Sunday, March 13, 2011, Crowley took responsibility for the remarks and submitted his resignation to Clinton. (AP Photo/Charles Dharapak) (Charles Dharapak)
--

Ever since P.J. Crowley resigned as State Department spokesman last month following his public criticism of the Pentagon's treatment of Bradley Manning, he has become, through a steady stream of tweets and media appearances, one of the more compelling foreign policy analysts out there.

Gone was the Crowley whose job was to toe the official line. The new Crowley has been free to be critical of the administration -- while still offering valuable insights into the official thinking on a range of issues. A recent Politico profile reported that Crowley was already headed toward the door when he made his Manning comments -- but the ensuing flap cost him an ambassadorship.

Just this week, Crowley was vindicated when the Pentagon moved Manning -- the soldier charged with leaking classified information to WikiLeaks -- from solitary confinement at Quantico, Va., to a medium-security facility at Fort Leavenworth, Kansas.

I spoke to Crowley on Friday about the Manning move, and about administration policy in Libya, Israel and Bahrain. Crowley told me he is still mulling his options about what to do next, but he has accepted a teaching position that will be officially announced soon.

Do you think Bradley Manning would have been moved from Quantico without your experience and all the press it got, as well as the pressure from activists and journalists on the issue?

There's no question that the public pressure, both domestically and internationally, helped propel the Pentagon decision to move him. But understand that, notwithstanding my public comments, there were many, many people inside government and outside government who were working on this for some time. The Pentagon finally realized it was in an unsustainable position.

You mentioned on Twitter that you believe what happened at Quantico should potentially be investigated. Can you elaborate?

Manning's civilian attorney has raised some very serious questions about command decisions at Quantico, and whether they had either a legal or medical foundation. That should be investigated.

And what form should that take?

This should be investigated within the Marine Corps chain of command.

Do you have other thoughts on what should be happening with Manning now?

Well during the Pentagon press briefing, the commander of the Fort Leavenworth medium-security facility acknowledged that Quantico was unsuited for long-term pretrial detention. So it took a while, but assuming that Manning passes his evaluation at Fort Leavenworth, it would appear it is a facility and an environment that is more consistent with the pretrial confinement of prisoners throughout our judicial system.

I saw you've also been tweeting about Libya. A lot of people who saw the news that the administration is dispatching drones, and that other countries are sending trainers and arms, say that we're seeing mission creep. Do you think that we are seeing mission creep and, if so, is that a bad thing?

I don't think we're seeing mission creep. The president made a very important decision which demonstrates what we've learned from Iraq. The cost of the Iraq war -- more than $1 trillion -- came because the Bush administration decided that we had to invade, and in invading that we had responsibility for what followed. Deciding not to put boots on the ground [in Libya] is very important. It means that you're using military force in support of a broader political objective. The issue is not mission creep, the issue is making sure that we're applying military pressure, which, combined with political and economic pressure, can have the desired effect over time, which is pushing Gadhafi from power. But the responsibility for the future lies with the Libyan people, not with the imposition of a solution from the outside.

There's still a crackdown going on in Bahrain that's not getting much attention. I wonder if you could talk about, from your experiences inside the administration, how much of a focus there was on Bahrain. And now, do you think there's something more the U.S. could be doing to pressure the government there?

Bahrain is a very significant challenge. It would appear that the promised reforms have essentially ground to a halt. The challenge there is trying to determine what kind of influence we can have in the short term versus the long term. And given the concern in the region and perceptions that any concession to the Shia majority is a concession to Iran, it's just going to take some time to get the Bahraini government and other countries in the region -- most especially Saudi Arabia -- to be able to look at this with a broader view. I understand there's this challenge of contrasting the response in Libya to the response in Bahrain, but I think that the administration has simply decided that going public significantly with our concerns is just simply not going to work. The goal is still to encourage Bahrain to undertake reforms, but I think there's just simply a recognition that, with the movement of Saudi forces into Bahrain, we have to look at this through a longer-term lens.

Jumping over to Israeli-Palestine, the Palestinian Authority is now talking about going to the U.N. in September, either through the Security Council or the General Assembly, and seeking recognition as an independent state. News reports suggest that the Obama administration has tried to dissuade them, but it seems like they're going forward. How do you think the administration would handle that move if the Palestinians do try to do this?

Well if the Palestinians go to the United Nations General Assembly in September to seek some kind of recognition, the United States is in no position to stop it. We don't have a veto in the General Assembly. The real question is, will it make any difference? And the answer is no. The administration has long held that this move would be not productive and probably counterproductive for the Palestinian cause. That has been our advice to the Palestinians publicly and privately, and I don't see that changing. There's still time to try to get a direct negotiation restarted, but there's little evidence that there's the kind of productive dynamic between President Abbas and Prime Minister Netanyahu that would give a lot of hope. There are speeches coming up -- the prime minister is coming to the United States to talk to Congress. Secretary Clinton has indicated the president may give an address on the situation sometime soon, but the real problem is not a [lack of] desire by the United States to push this forward, the problem really is the lack of any rapport between the Israeli government and the Palestinian Authority that would give you any hope of progress.

Even if President Obama gives a speech, are you expecting to see any sort of major initiative from the administration on this, or do you think they're in a holding pattern?

My personal view is that Prime Minister Netanyahu, recognizing that a Palestinian move at the U.N. in September would put Israel in a difficult political situation, has to be the first to try to change perceptions of where things are now. He may try to do that in his upcoming address in the United States. A lot of people are pointing to his speech here, but if he's actually going to put on the table a dramatic move, he would do that before his own people, not before the American people. I personally don't see any immediate prospect for a breakthrough.