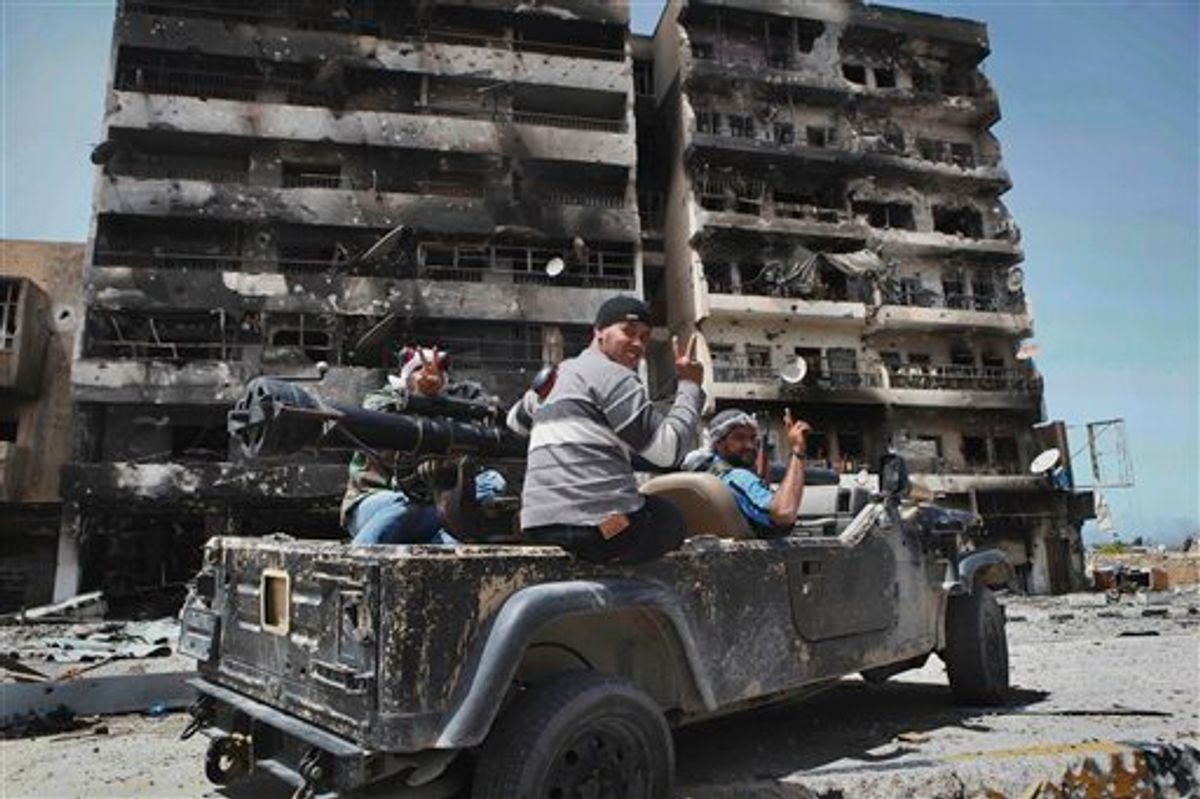 Libyan rebel fighters flash the victory sign as they drive past a heavily-shelled building searching for pro-Gadhafi forces in the besieged city of Misrata, Libya, Saturday, April 23, 2011. Government troops retreated to the outskirts of Misrata under rebel fire Saturday and the opposition claimed victory after officials in Tripoli decided to pull back forces loyal to Moammar Gadhafi following nearly two months of laying siege to the western city. (AP Photo) (AP)
--

A resident of Misrata says rebel fighters have driven Moammar Gadhafi's forces to the edge of the besieged city in western Libya, but that government forces continue to attack with rockets.

The resident says rebel fighters on Sunday cleared the rest of Tripoli Street, a thoroughfare previously controlled by Gadhafi loyalists. He says opposition forces took control of the main hospital in the area.

The Misrata resident who asked to be identified only by his given name, Abdel Salam, for fear of retribution, said two people were killed and that government troops fired 70 rockets at Misrata.

Late Saturday, a Libyan government official claimed that troops had halted operations in Misrata as part of an attempt by tribal chiefs to negotiate with the rebels.

Misrata, the only major rebel stronghold in Gadhafi-controlled western Libya, has become the most dramatic battleground in the Libyan uprising, which began in February after similar revolts in Tunisia and Egypt ousted longtime leaders. Fighting elsewhere in the country is at a stalemate, even with NATO airstrikes that began last month.

Hundreds of people have been killed in two months of a government siege backed by tanks, mortars and snipers firing from rooftops. Late last week, rebels drove snipers from a tall downtown building, in a setback for Gadhafi loyalists who had controlled the city center. The rebels have defended positions around Misrata's seaport.

"They have no mercy. They are pounding the city hard," Misrata resident Osama al-Shahmi said of Gadhafi's forces, speaking Sunday after being evacuated from the city by boat.

"Everyone in Misrata is convinced that the dictator must go," said al-Shahmi, 36, a construction company administrator who was wounded by shrapnel from a Grad rocket. His right leg wrapped in bandages, al-Shahmi flashed a victory sign as he was wheeled on a gurney into a waiting ambulance upon arrival in the rebel stronghold of Benghazi.

Kaim, the Libyan official, said the army has halted operations in Misrata since Friday, as part of the attempt of tribal leaders to negotiate an exit deal for the rebels.

However, residents reported heavy fighting, shelling and explosions in the east and south of Misrata and doctors said Saturday was one of the bloodiest days in weeks.

At least 24 people were killed and 75 were wounded, many of them critically, said a doctor at a Misrata hospital who asked to be identified only by his first name because he was afraid of government retribution. He said that hospital officials who feared a strong attack Saturday had moved out some patients a day earlier to make way for more casualties.

Kaim said the tribal chiefs are determined to put an end to the fighting, in part because it has blocked access to the Misrata seaport. "The leaders of the tribes are determined to find a solution to this problem within 48 hours," he said.

If negotiations fail, "the other option, which is still available for the leaders and the heads of the tribes is a military intervention to liberate Misrata," he said.

He said the six main tribes in the region can muster 60,000 armed men.

Also Sunday, two aid vessels carrying more than 1,400 Misratra evacuees, most of them foreign workers, arrived in the rebel stronghold of Benghazi in eastern Libya. Such ships have been ferrying hundreds of people, including migrant workers and wounded Libyans, from Misrata to Benghazi in recent days.

Between 2,000 and 3,000 people, many of them migrants, are still stranded in the port area of Misrata, awaiting evacuation, said Javier Cepero of the International Committee of the Red Cross.

Some of the migrants have been waiting for rescue for four or five weeks, he said. The Libyan Red Crescent is trying to provide the stranded workers with food and medical care, but sending aid is difficult because of the fighting, he said.