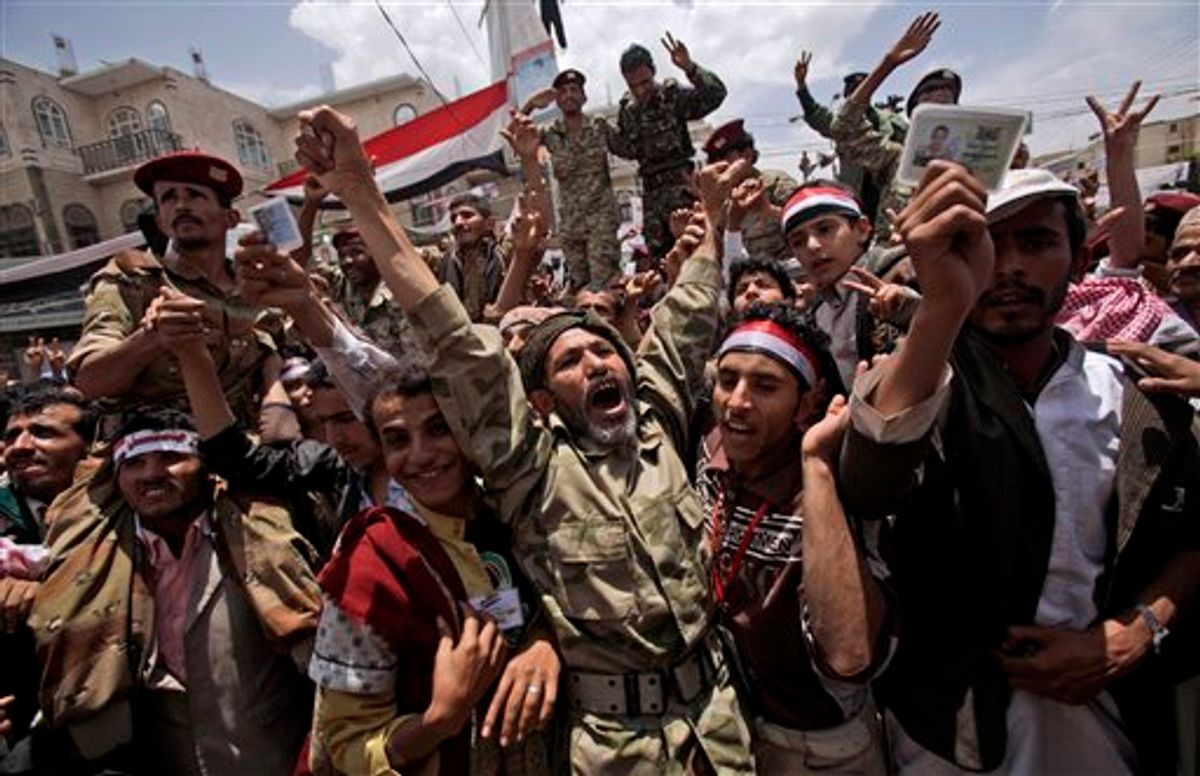 A Yemeni army officer, center, reacts as he and other officers join anti-government protestors in a demonstration demanding the resignation of of Yemeni President Ali Abdullah Saleh, in Sanaa, Yemen, Sunday, April 24, 2011. Yemen's embattled president agreed to a proposal by Gulf Arab mediators to step down within 30 days and hand power to his deputy in exchange for immunity from prosecution, a major about-face for the autocratic leader who has ruled for 32 years. (AP Photo/Muhammed Muheisen) (AP)
--

Deep divisions within Yemen's opposition appeared to doom an Arab proposal for the president to step down within a month, raising the prospect of more bloodshed and instability in a nation already beset by deep poverty and conflict.

President Ali Abdullah Saleh, who has ruled for 32 years, agreed Saturday to the Gulf Cooperation Council's formula for him to transfer power to his vice president within 30 days of a deal being signed in exchange for immunity from prosecution for him and his sons.

A coalition of seven opposition parties generally accepted the deal. But thousands stood their ground Sunday in a permanent protest camp in part of the capital, Sanaa, and their leaders said they suspect Saleh is just maneuvering to buy time and cling to power. The protesters say the established opposition political parties taking part in the talks with Arab mediators do not represent them and cannot turn off the rage on the streets.

"President Saleh has in the past agreed to initiatives and he went back on his word," said Khaled al-Ansi, one of the youth leaders organizing the street protests. "We have no reason to believe that he would not do this again."

So far, Saleh has outrun more than two months of protests pressing for him to immediately step down, thanks in large part to the unwavering loyalty of the country's best military units, which are controlled by one of his sons and other close relatives.

That seems to have insulated him even as outrage over the severity of his crackdown on protesters has stripped him of many close allies in his party, his tribe and the military.

International pressure is also bearing down on him to leave, including from the United States, which had backed his rule with millions in financial assistance and military aid for fighting the active al-Qaida branch that has taken root in the country.

A bloc of Gulf nations, including powerful Saudi Arabia, has been trying to broker an end to the crisis, fearing the potential blowback of more instability in the fragile country on the southern edge of Arabia.

But the protesters in the streets, who are from an array of different backgrounds and are not represented in the talks, reject the proposal outright and want nothing short of Saleh's immediate resignation and his trial on charges of corruption and for the killings of unarmed protesters.

The proposal's steps call for the established opposition parties to join Saleh in a unity government. The president would then submit his resignation to a parliament dominated by his own party, which would have to approve or reject it. What happens if they reject it is unclear. If approved, he would transfer his power to his vice president.

Mohammed al-Sabri, spokesman for the opposition political parties, said the coalition does not want to discuss a unity government until after Saleh is out of power.

"How could we form a government that gets sworn in by a president who has lost his legitimacy?" he said.

The protesters, meanwhile, are calling for more demonstrations in the next few days to intensify the pressure.

In response, the government signaled it would not agree to any adjustments in the Gulf proposal, with a statement on the official SABA news agency saying the initiative must be implemented in its entirety.

That raised the prospect that Saleh was counting on the opposition to reject the deal and only agreed to it to make them look like the spoilers.

Thousands of protesters, meanwhile, held onto their camp in the capital's Change Square, where they are ringed by military units that defected to join and protect them. Army officers in desert camouflage uniforms mixed with the crowds, pumping their arms into the air and flashing victory signs.

Their anger has been fed by the heavy crackdown. More than 130 people have been killed by security forces and Saleh supporters since the unrest began in early February. At least 40 were killed in a single attack on March 18 by rooftop snipers overlooking Change Square.

Saleh offered earlier in the crisis to step down by the end of the year and guarantee that his son Ahmed would not succeed him. When that failed to ease the unrest, he rolled back and insisted he would stay until the end of his term in 2013. Seeking to ease the international pressure on him, he warned the country would slide into chaos and al-Qaida would seize control if he left early.

The U.S. is concerned about the possibility of a security vacuum as well as political and economic paralysis if Saleh leaves office without a clear deal in place, said a former U.S. ambassador to Yemen, Barbara Bodine.

But she did not think any new government would partner with al-Qaida.

"I do not think we need to be concerned that a Taliban-like government is going to come in, one that is going to support and facilitate al-Qaida in the Arabian Peninsula," she said in an interview on Saturday night.

Her assessment of the Gulf mediation effort was that it would not bring a quick end to the crisis.

Saleh, a shrewd politician and former military officer, has held power for decades by using his security forces to put down opponents and deftly negotiating with powerful tribes that hold sway in Yemen's remote hinterlands.

He has fended off numerous serious challenges. The country's al-Qaida offshoot has attacked his forces, an armed rebellion has battered the north of the country and a secessionist movement has reappeared in the once-independent south.

At the same time, the country is rapidly running out of water and oil and is the poorest in the Arab world.

The United States has watched the uprising with particular concern because Saleh has been an ally in fighting al-Qaida in the Arabian Peninsula, which has been behind two nearly successful attempts to attack U.S. targets in recent years and has an estimated 300 fighters.

Washington is now backing a transition of power to end the crisis. The White House on Saturday urged all parties in Yemen "to move swiftly to implement" a deal transferring power.