The British star plays himself in the inventive, dazzlingly funny "Trip," a must-see for fans of dark English humor 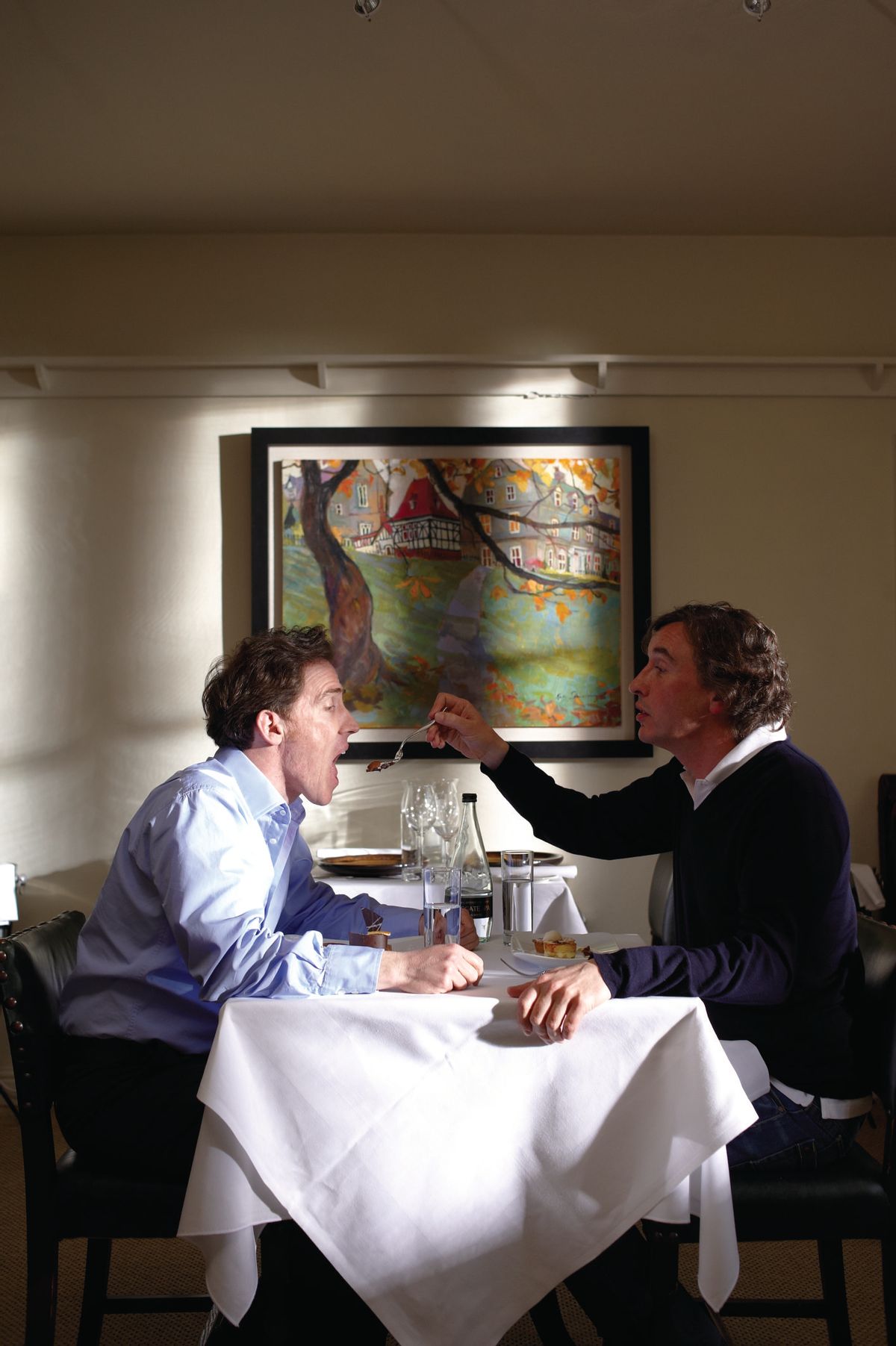 Steve Coogan is the one-man apotheosis of British comedy's translation problem. A household name in the United Kingdom, thanks largely to his TV persona as the intolerably dense and pompous talk-show host Alan Partridge, Coogan could most likely stroll through any American shopping mall in total anonymity. Sure, he played Octavius in the "Night at the Museum" comedies and Hades, god of the underworld, in "Percy Jackson & the Olympians: The Lightning Thief" -- but therein lies the problem, or one of them anyway. Russell Brand and Ricky Gervais have their own problems translating themselves into the American idiom, but at least they're offering rough approximations of their existing shtick. Coogan is a superstar in British TV and a supporting player in sub-mediocre Hollywood kids' movies. (My short answer: Americans don't mind being made fun of, exactly -- see also Simpson, Homer -- but the instability and multiple layers of Coogan-style mockery and self-mockery remain unfamiliar to most Yanks.)

In Michael Winterbottom's rambling and dazzlingly funny "The Trip," which isn't quite a dramatic film or a documentary and doesn't belong to any other known genre either, Coogan gets to act out his American failure in a mixture of Freudian psychodrama and sympathetic magic. Playing himself, or at least a character called Steve Coogan, he spends much of the movie in unhappy phone conversations with his agents, turning down villain roles in second-rate movies and contemplating a seven-year commitment to an HBO medical drama. "I don't want to do British TV!" he whines at one point -- and that must have gotten a laugh on the first go-round, since "The Trip" began life as a six-episode BBC series, later edited into this theatrical film.

Coogan even has a dream in "The Trip" of a poolside idyll in Beverly Hills, where a fast-talking American agent played by Ben Stiller assures him that all the "auteurs" -- Wes Anderson, P.T. Anderson, Alexander Payne, the Coens, the Wachowskis -- want to work with him, before vanishing in unsatisfying, dream-image fashion: "I have to go! I have a thing! I probably won't talk to you later!" At least that one's better than the other dream, the one where a fan stops Coogan on the street to get his autograph and then shows him a derisive tabloid headline about him, profane even by British standards. (Coogan does indeed have a reputation in showbiz circles as a party animal, womanizer and all-around diva, and perhaps the best way to handle that is to go straight at it, as he does here.)

"The Trip" has played to packed houses this weekend at the Tribeca Film Festival, just as it did in Toronto last fall. It deserves a fuller consideration before it opens in American theaters and VOD release in June, but be advised that if you admire British comedy in its most oblique, taking-the-piss form, this is one not to miss. The ostensible premise of "The Trip" -- and to some extent the actual premise, since its documentary elements are largely legitimate -- is that Coogan and his fellow comic Rob Brydon set out on a fine-dining tour of twee country inns across the north of England. Coogan only calls Brydon because Coogan's American girlfriend (Margo Stilley) has bailed for New York after a semi-breakup, and the two comedians seem more like rivals than friends, repeatedly sparring over who does the best Michael Caine, Al Pacino or Woody Allen impressions. (Yes, these are all over YouTube; Google if you must, but it's all better in the context of the film and/or show.)

At the risk of needlessly complicating things, I should add that Coogan and Brydon have played "themselves" before, in Winterbottom's 2005 "Tristram Shandy: A Cock and Bull Story," which both was and was not an attempt to adapt Laurence Sterne's pre-postmodern 18th-century novel, and that you could view "The Trip" as some kind of spinoff from or sequel to that movie. Like "Tristram Shandy," "The Trip" is both what it's pretending to be -- in this case, a story about combative old friends taking a food-and-wine vacation; a sideways Anglo remake of Payne's "Sideways" -- and an attempt to rip the veil of fiction and expose the backstage machinery of entertainment. (Is Winterbottom spoofing the spate of movies about self-pitying middle-aged guys or perfecting the genre -- and is there a difference?) The casual, subtle, improvised quality of "The Trip" can't quite conceal how brilliant it is. This is an instant classic of British comedy, culminating in an a cappella duet of ABBA's "The Winner Takes It All" that will leave you weeping with laughter, and maybe just weeping.