How did 500 inmates escape an Afghan prison?

The elaborate plot freed more than 100 Taliban commanders. How'd they do it? 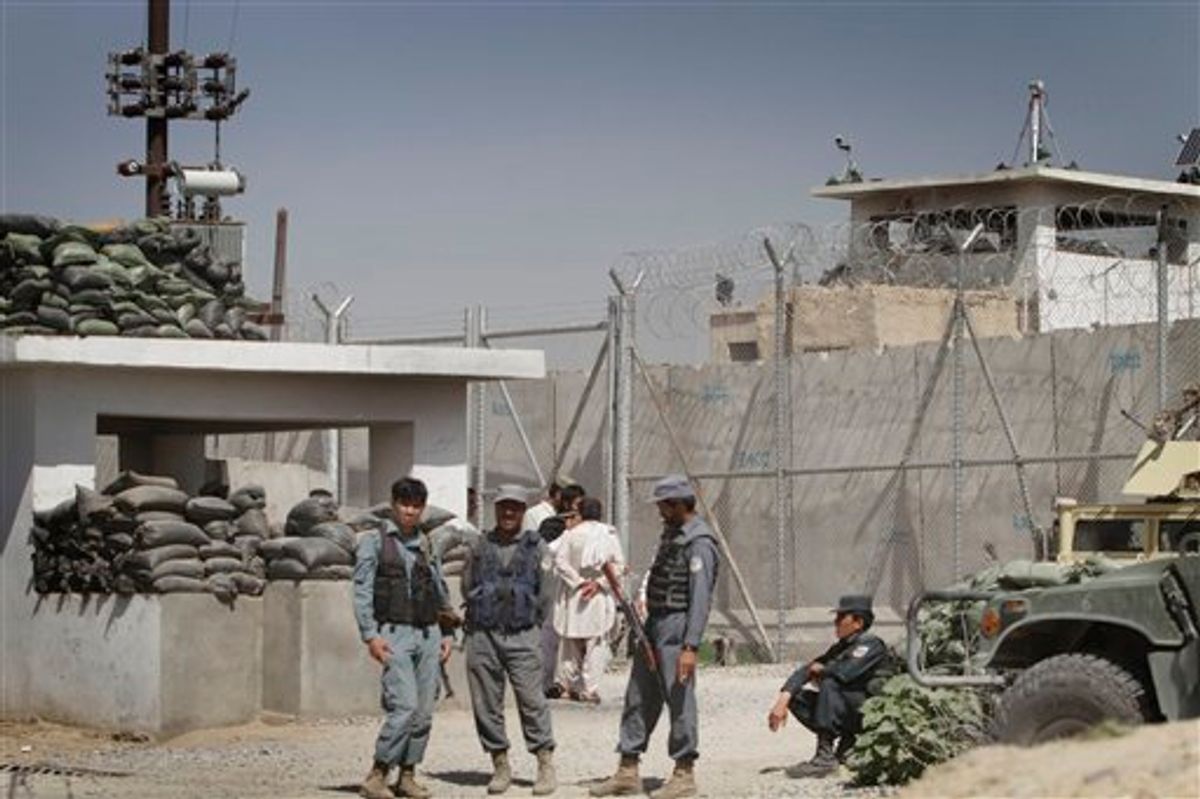 Afghan policemen stand in front of gate of the main prison in Kandahar, south of Kabul, Afghanistan on Monday, April 25, 2011. Taliban insurgents dug a more than 1,050-foot (320-meter) tunnel underground and into the main jail in Kandahar city and whisked out more than 450 prisoners, most of whom were Taliban fighters, officials and the insurgents said Monday. (AP Photo/Allauddin Khan) (AP)
--

The world is abuzz after a massive, dramatic prison break in Kandahar, Afghanistan, freed hundreds of prisoners early Monday morning. The Taliban has claimed responsibility for the escape, which ferried at least 475 inmates -- more than 100 of them reportedly Taliban commanders -- through a 1,000-foot-long underground tunnel extending beyond the prison walls. Questions abound in the break's aftermath, especially at a time when the U.S. military finally began posting security gains in southern Afghanistan. But the one question that seems to be on everyone's mind is less focused on the impact of the security breach, and more concerned with its logistics. Specifically: How on Earth did this happen?

As details have trickled out of Kandahar in the past several hours, what seems most clear is that the escape was meticulously planned and carefully executed:

The inmates escaped from Sarposa prison through a more than 1,000 foot-long tunnel dug by insurgents during the last five months, Taliban spokesman Zabihullah Mujahid said, adding that the inmates planned the tunnel's course to avoid police checkpoints and major roads. They literally undercut the prison's main line of above-ground defense, including guard towers at each corner, concrete barriers and razor wire and multiple entry checkpoints.

The break's orchestrators arrived in a prison cell at around 11 p.m. last night. Three prisoners with prior knowledge of the plot proceeded to unlock cells, waking up prisoners four or five at a time. Over the subsequent four-and-a-half hours, conspirators escorted the throngs of incarcerated back through the tunnel to vehicles stationed outside the prison walls. At least 476 prisoners, and possibly as many as 541, ultimately escaped. Authorities were unaware anything was amiss another four hours.

The same prison suffered similar -- though much larger and more bloody -- jail break in 2008, when armed insurgents bore down on the facility, killing 16 guards as they freed 1200 inmates. Last night's escape, by contrast, was devoid of violence, though a "martyrdom-seeking-group near the prison" (in the words of a Taliban press statement) was prepared to set off explosive vests in the event that prison security discovered the escape in progress.

The biggest remaining mystery is how the escape's organizers obtained keys to prison cells. According to the Associated Press, one of the organizer's claimed "he and his accomplices obtained copies of the keys for the cells ahead of time from "friends." It's suspected that the prisoners were aided by Afghan prison guards, "dozens" of whom are still unaccounted for nearly a day after the breach.

"There is no way such a large escape could have been pulled off without anyone noticing," said a soldier monitoring the situation. The International Crisis Group in November said the Afghan justice system was "in a catastrophic state of disrepair" and that most Afghans see it as the most corrupt of the national institutions.