Is Brian Williams as funny as journalists think he is? 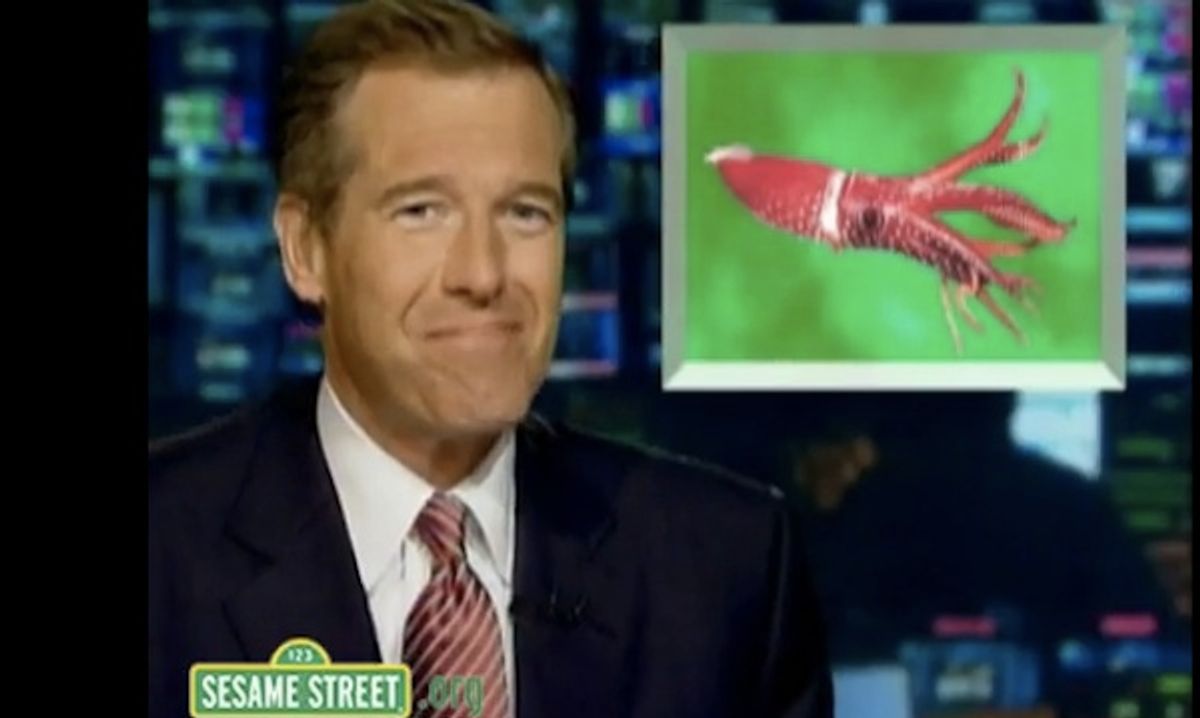 If squids had bones, Brian Williams would try to tickle their funny ones.
--

Is Brian Williams funny? That's what everyone seems to think these days, with his recent Taxi TV bit about Brooklyn hipsters, multiple "30 Rock" appearances, and a whole New York Magazine story dedicated to how hilarious the NBC anchor is. I'm not buying it.

As an example of the dry hilarity of the anchor with a Disney villain chin, writer John Swansburg offers this amusing exchange between "Saturday Night Live's" Seth Meyers (interviewed for the piece) and Williams:

"He knows his instrument as a newsman, but he’s very aware of his comic instrument as well," says "Saturday Night Live" head writer Seth Meyers.

Told of Meyers's admiration for his comic instrument, the anchor replies, "That’s odd, because we’ve never belonged to a health club together, and we’re both in successful long-term relationships."

Man, I thought having Eric Dondero as your dad was bad, but it must be so much more embarrassing for Brian's kids when he tries to be funny. I bet they stayed home sick from school today, just in case anyone happened to read their dad's corny dick jokes online.

But maybe I'm wrong. Is Brian funny? I mean he's "newscaster funny," and certainly up there with the likes of Anderson Cooper, but I don't think he's quite ready to quit his day (night) job yet and start opening sets at Comix. You tell me: Here are four clips of Brian's comedy routines that New York Magazine didn't show you. Is Brian Williams' humor worth the hype?

Brian Williams and his " shmegegge" on "Late Night with David Letterman"

I wonder if Brian knows that shmegegge – a Yiddish term, no duh – doesn't mean "penis" but "a maladroit, untalented type" full of "hot air" or "nonsense." Sort of like this joke's punchline.

Brian Williams "Behind the Scenes" at "30 Rock"

While his faux-bombing of the TGS audition was funny in the final cut of the episode, you can see Williams improvise the dialogue here. It's less "someone trying to be terrible at being funny" and more "someone actually trying to make a joke about what happens when the refrigerator's lights go out." Painful.

Brian Williams, explaining what a squid is on "Sesame Street"

OK, I understand that I am not the intended audience for "Sesame Street" humor. But I always figured that they'd give this role to the newsman from "The Muppet Show," meaning that BriWi forced this puppet out of a job.

At the 2008 Ad Council Public Service Awards ceremony, Brian Williams is all anti-new-media.

"Hey Kindle, you ever heard of a library?" Yikes. Time to workshop some of that material, Brian.