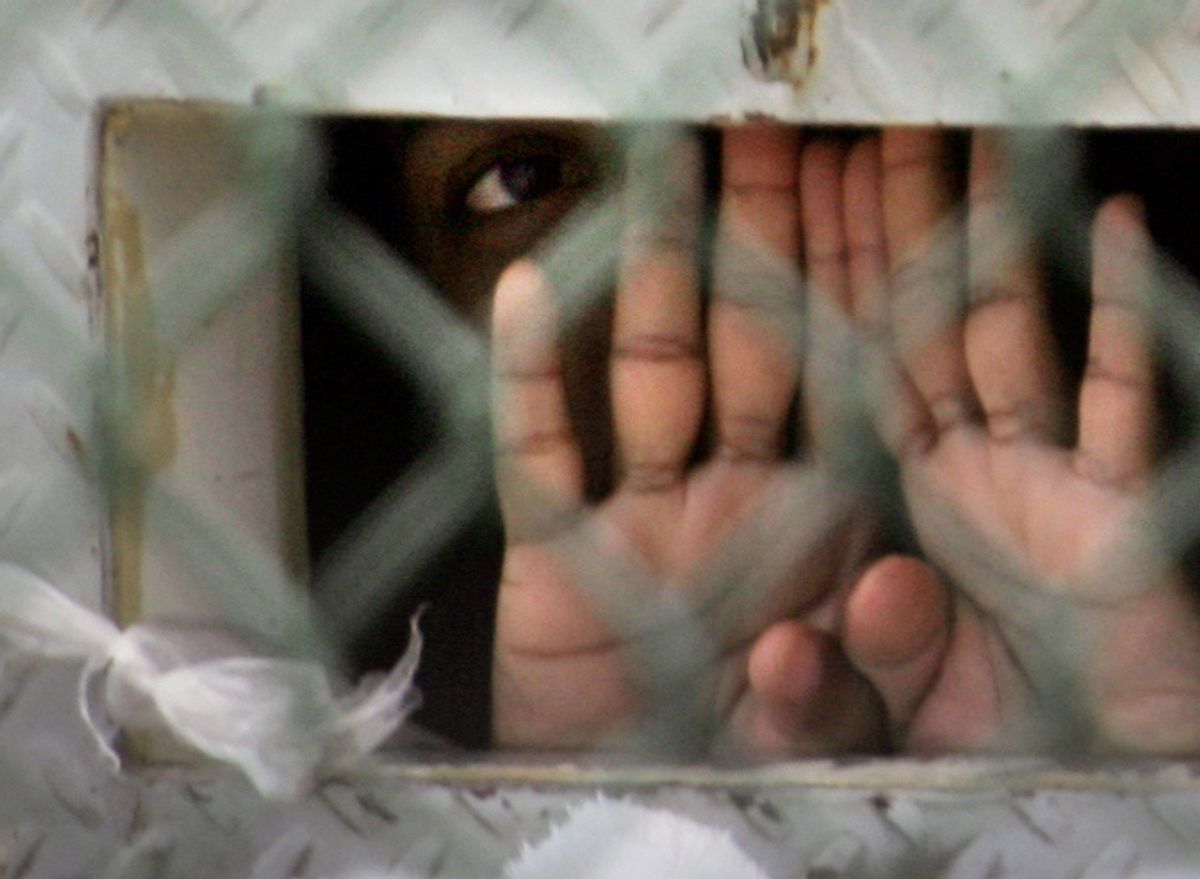 Numerous media outlets -- The New York Times, The Washington Post, The Guardian, The Telegraph, and NPR, among others – last night published classified files on more than 700 past and present Guantanamo detainees. The leak was originally provided to WikiLeaks, which then gave them to the Post, NPR and others; the NYT and The Guardian claim to have received them from “another source” (WikiLeaks suggested the “other source” was Daniel Domscheit-Berg, a former WikiLeaks associate who WikiLeaks claims took, without authorization, many WikiLeaks files when he left).

The documents reveal vast new information about these detainees and, in particular, the shoddy and unreliable nature of the “evidence” used (both before and now) to justify their due-process-free detentions. There are several points worth noting about all this:

(1) Given that multiple media outlets have just published huge amounts of classified information, it is more difficult than ever to distinguish between WikiLeaks and, say, the NYT or the Post under the law. How could anyone possibly justify prosecuting WikiLeaks for disseminating classified information while not prosecuting these newspapers who have done exactly the same thing? If Dianne Feinstein, the DOJ and Newt Gingrich are eager to prosecute WikiLeaks for “espionage” – and they are – how can that not also sweep up these media outlets?

(2) Once again we find how much we now rely on whistleblowers in general – and WikiLeaks and (if he did what’s accused) Bradley Manning in particular – to learn the truth and see the evidence about what the world’s most powerful factions are actually doing. WikiLeaks is responsible for more newsworthy scoops over the last year than all media outlets combined: it’s not even a close call. And if Bradley Manning is the leaker, he has done more than any other human being in our lifetime to bring about transparency and shine a light on what military and government power is doing.

(3) The difference among the various newspapers in how these leaks are being presented is stark, predictable and revealing. The Guardian emphasizes exactly what is most important about these documents: how oppressive is this American detention system, how unreliable the evidence is on which the accusations are based, and how so many people were put in cages for years without any justification: 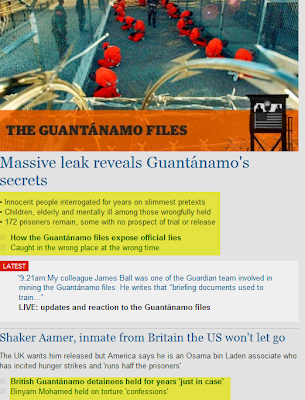 On its front page, the Telegraph trumpets the “more than 150 innocent people held at the U.S. prison.”

The NYT, by stark contrast, emphasizes how Dangerous and Menacing these Evil Terrorists are shown to be (while at least noting underneath that many were held without cause): 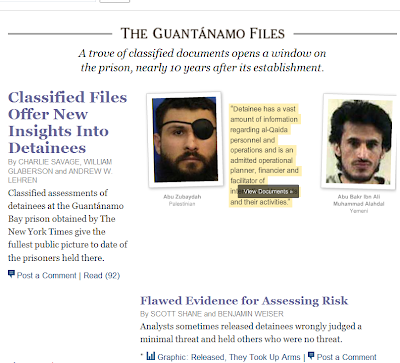 Unsurprisingly, the Washington Post is the most absurd of all; here’s what they found most newsworthy: 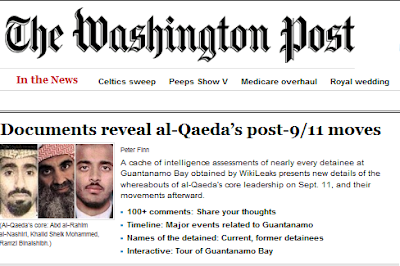 In sum, foreign newspapers highlight how these documents show U.S. actions to be so oppressive and unjust, while American newspapers downplayed that fact. That reflects Jack Goldsmith's praise of American media outlets as comprising a “patriotic media”.

(4) These documents shed new light on the persecution of Sami al-Haj, the Al Jazeera cameraman who was encaged at the camp for more than 6 years and then abruptly released without ever being charged. As I’ve written many times, this was one of the most discussed cases in the Muslim world – that the U.S. would imprison an Al Jazeera journalist without charges for years – yet (outside of Nicholas Kristof) it was almost entirely suppressed in establishment media outlets (even as American journalists obsessed on the imprisonment of American journalists by Iran and North Korea for far shorter periods of time).

Al-Haj has long claimed that he was interrogated almost exclusively about his work for Al Jazeera, and virtually nothing about the accusations against him (being an “Al Qaeda courier”). The files released about him corroborate that claim, as The Guardian notes : “An al-Jazeera journalist was held at Guantánamo for six years partly in order to be interrogated about the Arabic news network.” In particular:

His file makes clear that one of the reasons he was sent to Guantánamo was "to provide information on ... the al-Jazeera news network's training programme, telecommunications equipment, and newsgathering operations in Chechnya, Kosovo and Afghanistan, including the network's acquisition of a video of UBL [Osama bin Laden] and a subsequent interview with UBL".

Al-Haj was far from the only journalist the U.S. imprisoned for years without charges during the War on Terror, but his case represents one of the most egregious – and under-reported – American acts during the last decade, given that he was detained to learn more about Al Jazeera. These newly released files dispel any doubt about the accuracy of al-Haj’s claims regarding his detention experience.

(5) Perhaps most important of all, these documents conclusively underscore the evils of the Obama administration’s indefinite detention regime. Just last month, President Obama signed an Executive Order directing that dozens of detainees held for years at Guantanamo continue to be imprisoned indefinitely without any charges: either in a real court or even before a military commission. Although indefinite detention was one of the primary hallmarks of Bush/Cheney radicalism, this order was justified by the White House and its followers on the ground that the President knows of secret evidence that shows that these detainees are Too Dangerous to Release, yet cannot be prosecuted because the evidence against them is tainted (see this post for why that line of reasoning is so logically and morally twisted).

The idea of trusting the government to imprison people for life based on secret, untested evidence never reviewed by a court should repel any decent or minimally rational person, but these newly released files demonstrate how warped is this indefinite detention policy specifically.  The New Yorker's Amy Davidson highlights some of the most extreme inanities in how "evidence" was assembled, while McClatchy’s Carol Rosenberg describes just some of the reasons to find this “evidence” so unreliable: beyond the fact that so much of it was extracted using torture:

The U.S. military set up a human intelligence laboratory at Guantanamo that used interrogation and detention practices that they largely made up as they went along. . . .

The documents, more than 750 individual assessments of former and current Guantanamo detainees, show an intelligence operation that was tremendously dependent on informants — both prison camp snitches repeating what they'd heard from fellow captives and self-described, at times self-aggrandizing, alleged al Qaida insiders turned government witnesses who Pentagon records show have since been released.

Intelligence analysts are at odds with each other over which informants to trust, at times drawing inferences from prisoners' exercise habits. They order DNA tests, tether Taliban suspects to polygraphs, string together tidbits in ways that seemed to defy common sense.

In one sense this is not new, as federal courts which have reviewed these detentions during the Obama administration have overwhelmingly found them lacking any credible evidence. Still, these files provide important new specifics. The NYT describes the case of Omar Hamzayavich Abdulayev – placed in Guantanamo in 2002 when he was 23 (he’s now 32) and one of the detainees just ordered indefinitely detained by Obama. The newly released files reveal what the NYT calls “the haunting conclusion of his 2008 assessment: ‘Detainee’s identity remains uncertain’.” In other words, the person who has been in Guantanamo for 9 years – most of his adult life – and whom Obama just ordered detained indefinitely with no charges, very well may not even be the person we think he is.

(6) Those condemning these disclosures – consisting of the now-familiar union of Bush neocons and the hardest-core Obama followers – are saying, in essence, that it would be far better if we had remained ignorant about the extreme unreliability of the “evidence” justifying these detentions, and that it would be preferable if the evidence showing the extreme injustice of continuing to imprison people there without so much as charging them with any crimes continued to be concealed.

Over the weekend, The Washington Post published a detailed account of why Obama has not closed Guantanamo, debunking the apologists' claim that he did everything he could but was thwarted by an independent Congress. Marcy Wheeler highlights just some of the key points from that article.

For those in New York and the Baltimore/D.C. area, I'll be speaking this week at these events.