James Franco puts another doctoral notch in his degree belt

At University of Houston for creative writing? Why not? We pick five more universities where the actor would excel 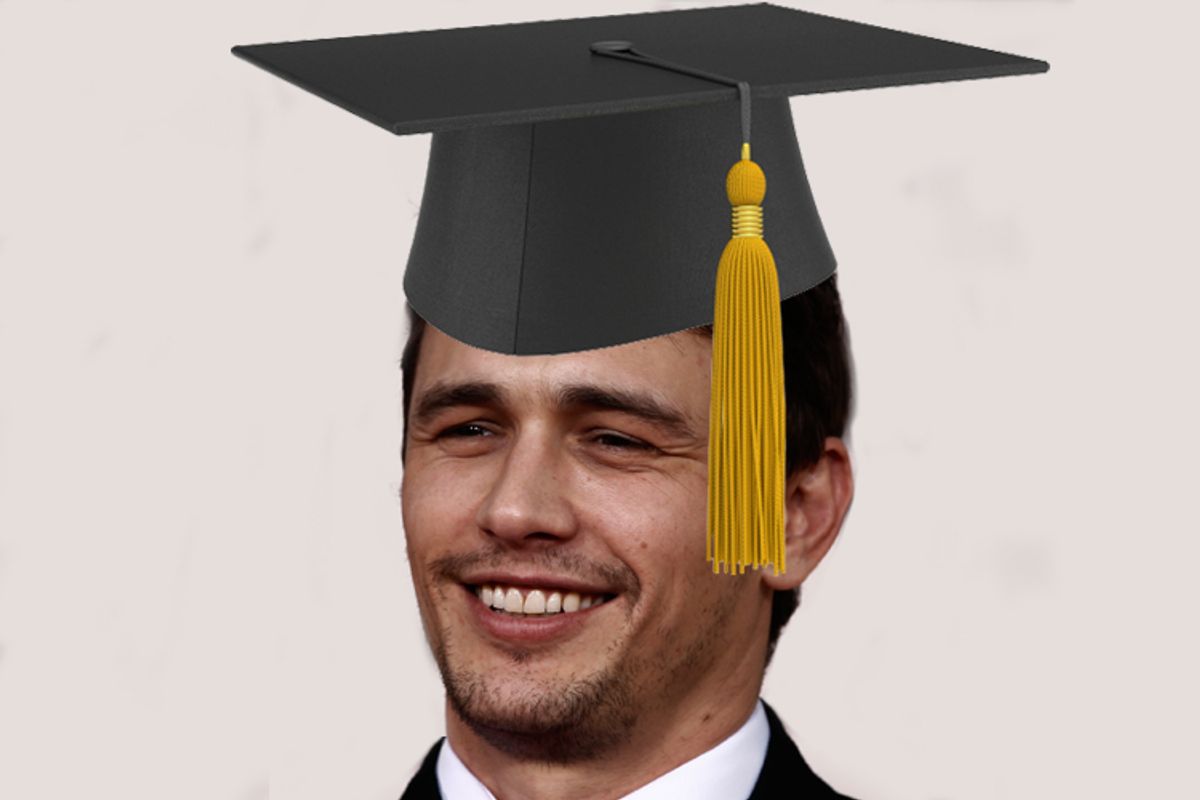 James Franco is getting another degree in creative writing. What are you going to do about it? Just because there is no legitimate way to tell how many degrees Franco currently has doesn't mean he shouldn't try to get more!

I mean, it's not like he has a book or anything. Or is getting a doctorate at Yale. Or has a creative writing MFA from Columbia University already. Or is taking classes at RISD. Or Skyping into a class that he is not teaching about editing videos of himself. Or teaching an NYU poetry class, where he'll be enrolling for another MFA this fall. (You only need one link for all this B.S., lucky you.)

James Franco has won a spot in a University of Houston creative writing program.

The university confirms that the actor nominated for the 2010 Academy Award for best actor in “127 Hours” has been accepted for the school’s doctoral program in literature and creative writing. Creative writing program director James Kastely tells the Houston Chronicle that Franco plans to enroll in September 2012.

Houston? Why Houston? Probably to prove that in addition to everything else, Franco can physically be in three places at once. Also that he has terrible taste. Has he ever been to Houston? Think about what that kind of humidity would do to his hair!

But in case Franco is worried about not having enough degrees to be considered a complete fraud, I've found a couple more programs for him to enlist in.

Why it's perfect for Franco: In order to get in to the women's liberal arts college, he'll have to dress in drag and convince his beautiful roommate that he's indeed a woman and not in love with her. This plot will win him a 2012 Oscar for Best Life-cum-Film.

Why it's perfect for Franco: It will take Franco at least two years to realize that Southern New Hampshire isn't a state. Unless it's a state of mind? Discuss.

Why it's perfect for Franco: Sending pretty boy Franco to the city that gave birth to "The Wire" seems like a great practical joke until he is cast in John Waters' latest feature, making him, in the words of Vanity Fair's September cover, "The New Divine."

Why it's perfect for Franco: Sending Franco to the same school where Bret Easton Ellis and Betty Ford earned their degrees? What could go wrong?