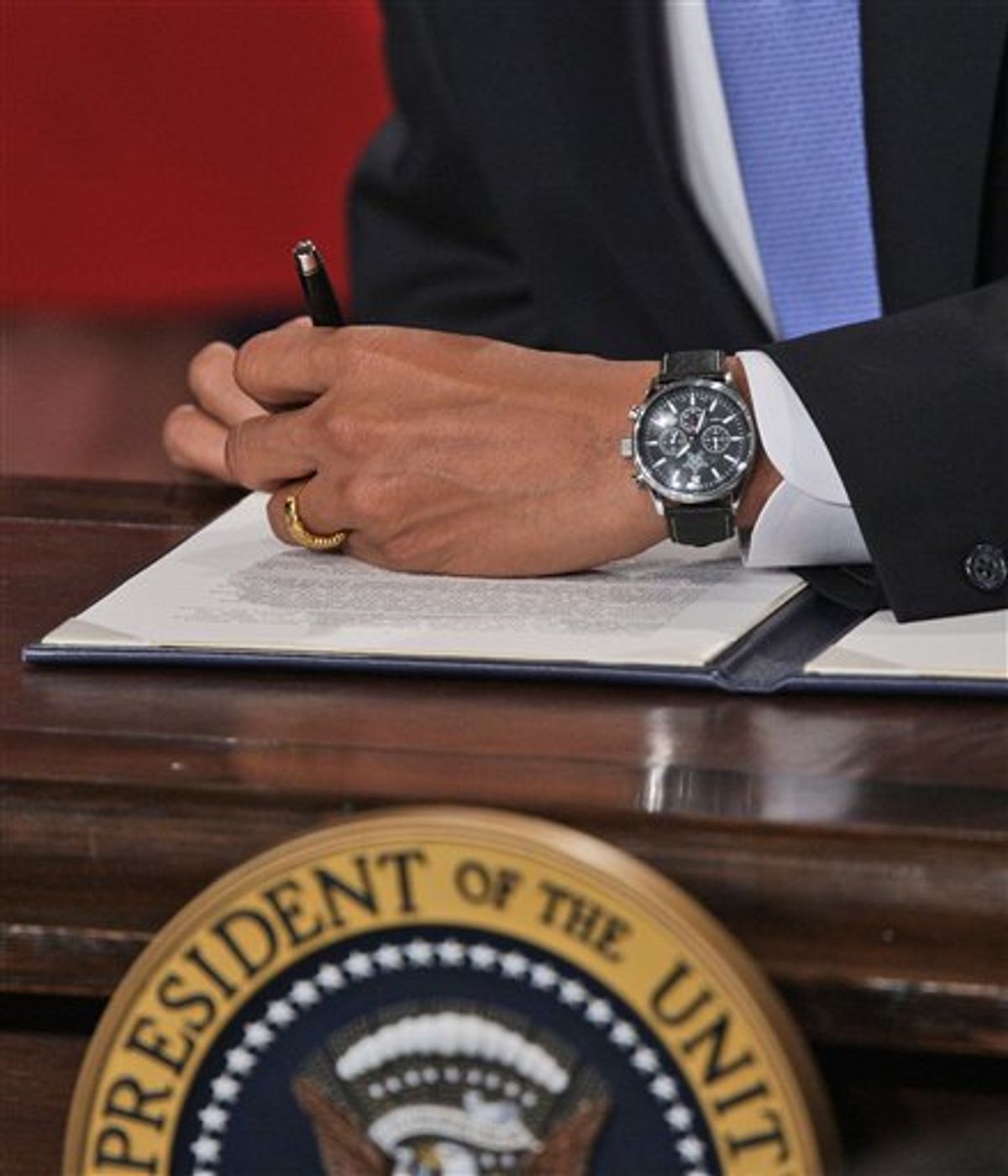 FILE - In this Jan. 21, 2009, file photo President Barack Obama signs one of five executive orders his first day on the job at the Eisenhower Executive Office Building in Washington. Two years into its pledge to improve government transparency, the Obama administration handled fewer requests for federal records from citizens, journalists, companies and others last year even as significantly more people asked for information. (AP Photo/Ron Edmonds, File) (AP)
--

The release Sunday  of nearly 800 leaked military documents shed light on hundreds of the inmates who have been held at Guantanamo Bay, including the 172 detainees still captive at the Cuban facility more than two years after President Obama signed an executive order to swiftly close the prison.

Looking at Obama's shifting rhetoric on the issue, we can trace the shrinking likelihood that promises to close the controversial detention center will be fulfilled.

"As President, I will close Guantanamo, reject the Military Commissions Act and adhere to the Geneva Conventions. Our Constitution and our Uniform Code of Military Justice provide a framework for dealing with the terrorists," says then-Sen. Obama.

"This is me following through on not just a commitment I made during the campaign, but I think an understanding that dates back to our founding fathers, that we are willing to observe core standards of conduct, not just when it's easy, but also when it's hard."

In a speech at the National Archives, Obama notes that closing the detention center is proving a challenge, but that:

"...by any measure, the costs of keeping it open far exceed the complications involved in closing it. That's why I argued that it should be closed throughout my campaign, and that is why I ordered it closed within one year."

Obama admits that the January 2010 deadline for Gitmo's closure will be missed:

"Guantanamo -- we had a specific deadline that was missed," he tells NBC while touring Beijing.

"It's hard not only because of the politics. People I think understandably are fearful after a lot of years where they were told that Guantanamo was critical to keeping terrorists out … So, I understood that that had to be processed, but it's also just technically hard -- I just think as usual in Washington things move slower than I anticipated."

Following the failed Christmas Day attack on a U.S. airliner, which was plotted in Yemen, plans to move a large number of Yemeni Guantanamo detainees back to Yemen were halted:

"We will not be transferring additional detainees back to Yemen at this time," Obama told reporters, while repeating his campaign promise: "But make no mistake. We will close Guantanamo prison, which has damaged our national security interests and become a tremendous recruiting tool for Al Qaeda."

A Justice Department-led task force concludes that nearly 50 of the 196 detainees at Guantanamo Bay should be held indefinitely without trial under the laws of war.

Only a handful of detainees faced military tribunals (of varying outcomes, as a Washington Post chronology illustrates).

The president goes back on his campaign pledge completely. He signs an executive order to create a formal system of indefinite detention for the captives still kept at the Cuban facility. The order applies to around 48 of 172 prisoners currently held. The detention center -- illustrated to be oppressive and reliant on haphazard methods by the freshly released documents -- is now enshrined as playing a continuing role in U.S. policy.

Most notably, a promise to close the facility does even not accompany his announcement of the executive order. Here is his March statement in its entirety:

From the beginning of my Administration, the United States has worked to bring terrorists to justice consistent with our commitment to protect the American people and uphold our values. Today, I am announcing several steps that broaden our ability to bring terrorists to justice, provide oversight for our actions, and ensure the humane treatment of detainees. I strongly believe that the American system of justice is a key part of our arsenal in the war against al Qaeda and its affiliates, and we will continue to draw on all aspects of our justice system – including Article III Courts – to ensure that our security and our values are strengthened. Going forward, all branches of government have a responsibility to come together to forge a strong and durable approach to defend our nation and the values that define who we are as a nation.

Little wonder then, that Anthony Romero, executive director of the American Civil Liberties Union told the Washington Post, "It is virtually impossible to imagine how one closes Guantanamo in light of this executive order… In a little over two years, the Obama administration has done a complete about-face."

(For analysis on why Guantanamo has stayed open, see The Miami Herald's Carol Rosenberg on the role of Congress and the U.S. refusal to take in detainees; See extensive analysis from the Washington Post which points to similar reasons; and see the Guardian on the remaining 172 detainees.)