"Treme" untangles the lessons of trauma 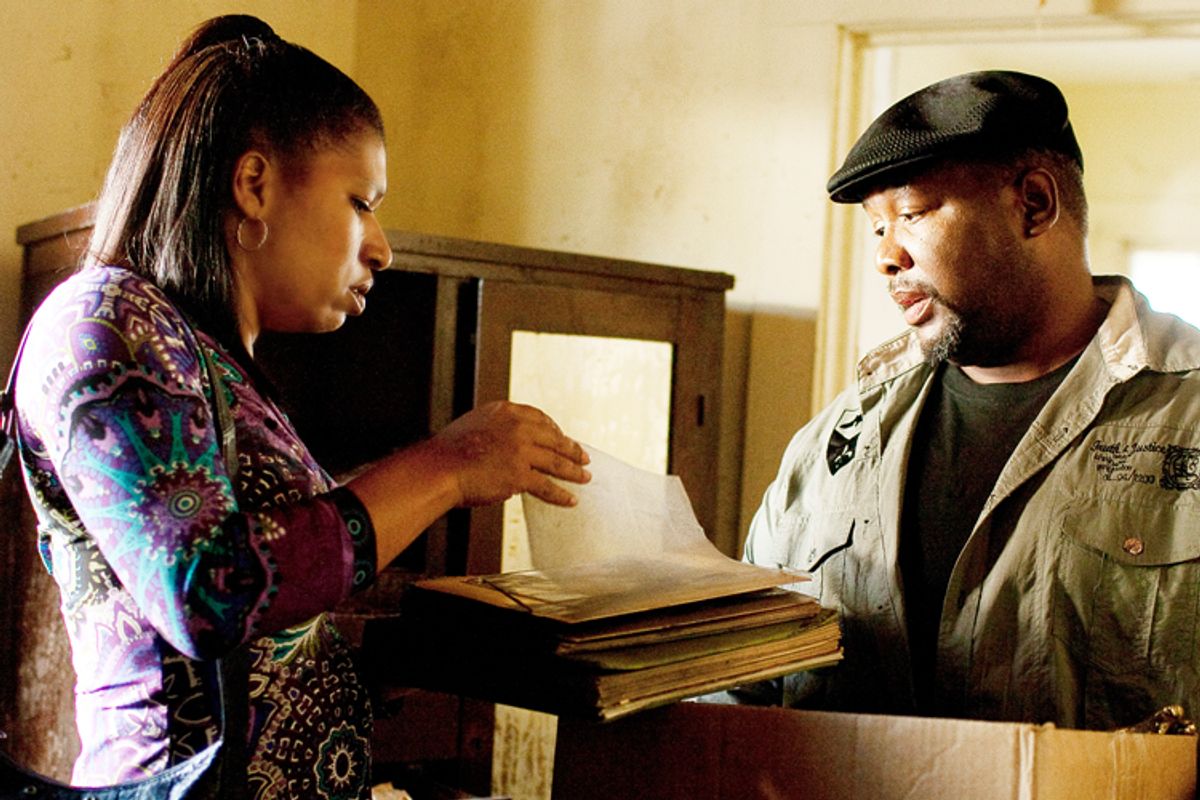 "Everybody is out of their minds," said Lt. Terry Colson (David Morse) in last night's second-season premiere of "Treme." That's not a bad way to sum up David Simon's gumbo-pot drama -- and it's less an apology than a simple observation. In the run up to the HBO series' 2010 premiere, much of the coverage focused on how "Treme" was similar to or different from Simon's previous show, "The Wire." But the biggest difference didn't really snap into focus until the final stretch of season one: "Treme" might be the first major American TV series that's mainly about how trauma messes with people's heads, and how hard it is to recover from it.

"The Wire" showcased vastly different psychological types: law-abiding, cheerful, productive; unfocused, self-destructive and violent. But you couldn't say that they had any single, obvious thing in common besides the fact that they all lived or worked in Baltimore. That's not the case on "Treme" (HBO Sundays, 10 p.m./9 central). The cast of characters consists mainly of New Orleaneans who survived one of the worst disasters of modern times, then continued to struggle long after the rest of America had moved on. The early reaction to that first season (among viewers and reviewers alike) was mostly respectful yet unmoved. You could sum it up as, "I liked 'The Wire,' and this seems thoughtful, but it's not grabbing me yet." In retrospect I don't think it was absence of unifying cops-and-crooks storylines, a la "The Wire," that put people off; the trauma factor probably came into play, too. Almost every significant recurring character had been stomped flat by life, and Simon kicked off the show's master narrative five short months after the stomping. It was a convention of the walking wounded -- not the sort of thing that large numbers of people want to watch on their last free night before the work week resumed.

"The Wire" was bleak, too, but there was an escapist aspect, however grubby. It had gunplay, tough-guy banter and "Godfather"-style intrigue.  In any given episode of "Treme," there were long stretches where the closest thing to action was a scene of a character trying to get answers from a city official about topic X or Y and being told to just give it up and go home. It was as if somebody had crossed Robert Altman's "Nashville" with a Frederick Wiseman documentary.

In the first few episodes, especially, the major characters seemed either very introverted or very extroverted, and they were prone to obsessive behavior and explosive fits of temper. The storm and its aftermath amplified their personalities to the point where a lot of them seemed either insufferably manic and pompous (Steve Zahn's DJ-musician Davis McAlary; John Goodman's professor Creighton Burnette) or foggy and numb (such as Kim Dickens' chef character, Janette DeSautel, or LaDonna Batiste-Williams, the bar owner played by Khandi Alexander).

Even the characters who seemed relatively well-adjusted had a touch of madness -- but there were times when that madness morphed into something oddly heroic. Creighton, a novelist suffering from writers' block, became a YouTube editorialist, the voice of forgotten and neglected post-Katrina New Orleans, while McAlary ran a ridiculous stunt campaign for city council that accidentally addressed real issues. Creighton succumbed to depression and McaAlary dropped out of the race. But for a short while, both men sparked their fellow citizens' imaginations by suggesting that if you said the right things loudly and often enough, you might be heard. Albert Lambreaux (Clarke Peters), housing contractor and Keeper of the Guardians of the Flame, is the show's closest thing to a knight in shining armor. Last season he protested the continued abandonment of an intact housing project by moving into it and turning his protest into a media event, and you can tell from last night's episode that he's gearing up for another crusade. He's an electrifyingly decent character, reminiscent of Dennis "Cutty" Wise from "The Wire." As Albert's son Delmond (Rob Brown) says, "I never meet a man so stubborn."

All this explains why "Treme" satisfies my persistent "Deadwood" jones better than any current drama. As more than one character has pointed out, in some sense everyone who survived Katrina is having to start over and rebuild (figuratively or literally) from the ground up. And to a man and woman, they seem up to the task, even though the local and regional government is either corrupt or in hopeless disarray, and the feds could not give a hundredth of a damn. It's a hopeful series -- much more so than "The Wire," where the best that most of the characters could hope for was a kind of sour, existential victory. Simon's Baltimore epic was fixated on man vs. society; society almost always won. In the New Orleans depicted on "Treme" -- circa late 2006 -- you have to put "society" in scare quotes. The place is a lot more civilized than David Milch's Deadwood, of course, but compared to any similarly big modern American city, it seems chaotic and unformed, like a Gulf Coast version of Dodge City. The likeness was impossible to miss last night. The criminals have returned to New Orleans, and you never know when a seemingly mundane conversation is going to interrupted by a carjacking, a mugging or random gunfire.

The storm still looms over everything. It's an absent presence, a paradox brilliantly defined in that extended flashback in the end of the season one finale that showed all the major characters reacting (or cluelessly not reacting) to the coming of Katrina. The story quickly returned to the present -- to a cemetery where LaDonna and her family were burying LaDonna's long-lost brother Daymo, a casualty of the storm whose body vanished into a bureaucratic void. We never saw storm footage or anything approximating a re-creation, unless you count that fleeting shot of the beautiful fiddle player Annie (Lucia Micarelli) and her drug-addled, mediocre pianist boyfriend Sonny (Michiel Huisman) walking down the middle of an empty street under wind-swept trees and darkening clouds. (Interesting how that flashback started out belonging to LaDonna alone, then hopscotched among all the other major characters, then returned to LaDonna again; it reminded me of a line from Ralph Waldo Emerson's essay "History" : "Of the universal mind each individual man is one more incarnation.")

Appropriately, that's where season two began -- with a cross-cut setpiece depicting rituals of grief and mourning. Creighton's wife Toni (Melissa Leo) and daughter Sofia (India Enegga) visited a finally reopened lemon ice place that used to be Creighton's favorite. Ladonna and her mom mourned Daymo, though at least they were able to remember the good times and not focus exclusively on the loss. Albert visited his late wife's crypt. And the great and irrepressible Antoine (Wendell Pierce) serenaded his mentor on trombone. (Antoine's reaction to his teacher's death -- spotting a suddenly empty hospital bed through a doorway -- was one of last season's most poignant moments, rivaled by another fantastic Antoine close-up: the scene where he says goodbye to the Japanese jazz tourist who bought him a new trombone. Wendell Pierce should get one Emmy a week, and each one should be delivered to his house with a six pack of beer and an order of ribs.) There was a sense that the trauma was ebbing a bit, but that the characters should not get too cocky. As a friend who lost his brother at a young age once told me, dealing with loss is like climbing a mountain, reaching what you think is the top, then realizing you've got another peak to climb, then another, then another.

Is "Treme" a perfect series? Of course not. The show's relentless New Orleans boosterism has whiff of greenhorn enthusiasm to it. The atmospheric and historical details often feel too much like evidence that the writing staff did its research and is hell-bent on proving it, and I always dread the moments where the characters stop talking and start speechifying. The problem isn't the content of the speeches, but their sanctimonious, bulldozing, I-will-brook-no-argument tone, which is poised somewhere between a crusading newspaper editorial and a David Simon talk show riff. Sofia's YouTube rant this week sounded just like her dad when it should have sounded like a teenage girl trying to sound just like her dad, a slender but crucial distinction; I believed in the spirit of the moment, but I didn't believe that particular combination of words coming out of that character's mouth. There's an even more unfortunate moment in next week's episode where Janette, still working in that pretentious douchebag chef's New York kitchen,  goes on a tear about a GQ article that slags her home city. The whole scene already has a whiff of media insider score-settling. The Letter to the Editor phrasing makes it worse.

Less irritating, though still problematic, are the scenes where Lt. Colson puts the city's crime and policing issues in context. I adore Morse, and I like that his character has been positioned as the well-intentioned but hamstrung voice of the establishment and a counterweight to civilians' reflexive griping and nihilistic doomsaying. But I wish every other Colson scene didn't consist of him delivering wisdom from the mountaintop while subordinates nod. (Colson's chemistry with Toni, on the other hand, is palpable, and their interactions have the lived-in credibility of Antoine's banter with his baby-mama Desiree; luckily there are a lot more of those on deck.) "The Wire" had soapbox tendencies, too, but you could excuse them because Simon was Baltimore to the bone; here it seems a touch carpetbaggerish. True, we're shown how exasperating Creighton, McAlary, Sonny and other self-righteous lecturer characters can be, but I still get the feeling that they speak for the show. At its most patronizing, "Treme" reminds me of Adrien Brody's character from "Summer of Sam," a Brooklyn teen who spent a few months in England and returned with a punk hairstyle and a Cockney accent.

But these are nitpicks. The show's sense of place is extraordinary, its confident unhurriedness is admirable, and its use of music is routinely astonishing. And from scene to scene, "Treme" is novelistic in the best sense -- a long, complex, involving story that takes a while to settle into, but that you can't put down and don't want to end. And when Simon's characters are just talking to each other, or watching other people talk, or perform, or when the camera is prowling along crowded streets or scanning nightclub crowds or bandstands or dipping close to an intricately laid-out plate of local cuisine, "Treme" takes you places and shows you things you've never seen on TV, and it puts you right next to the characters, watching them survive, grow and change. Watch the whole first season in one chunk and its intricate architecture becomes more readily apparent. Big things are happening here, but they're happening quietly. The music shouts, and sometimes the characters do, too, but "Treme" prefers to whisper.