The official network of strained, desperate "balance" gathers up the courage to call a clown a clown 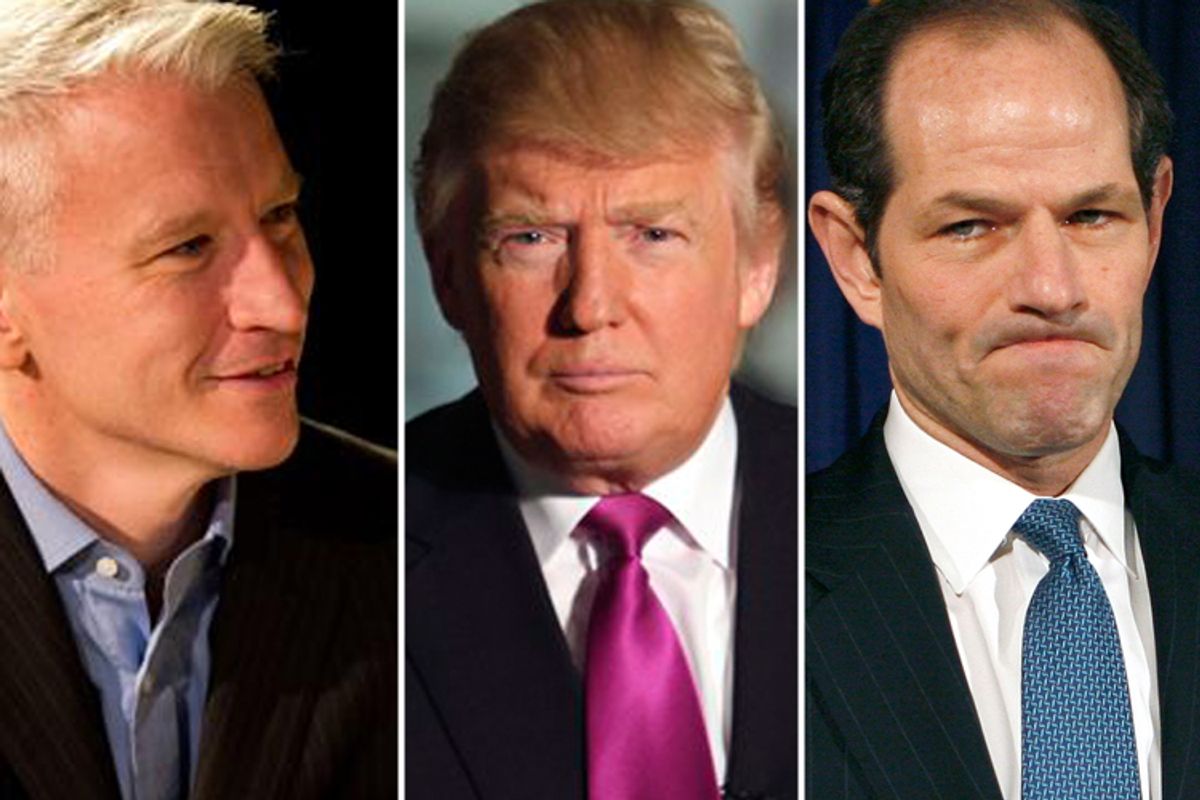 CNN -- the cable news network so addicted to the appearance of "balance" that it once presented a point-counterpoint on the Confederacy -- has finally found something it can take a stand against. While the channel prefers to define itself, these days, in opposition to the supposed excesses of its terribly biased competitors ("No bull," it once promised, until it canceled that show, as it has canceled all of the non-"Situation Room" shows), it has finally decided that enough is enough with one particular figure in American politics. That man -- the man who drove CNN over the edge into something resembling activist journalism -- is, of course, Donald Trump.

Eliot Spitzer, the former New York governor who was once paired on a CNN show with a conservative female columnist (because a partisan CNN host must always be matched by his opposite) until she was revealed to be unable to think of words to say when Spitzer paused for breath, led the charge against Trump by repeatedly calling him a broke liar on his show, which is apparently now called "The Arena." [CORRECTION: It is called "In the Arena." I regret the error.]

Trump always knows when anyone, anywhere, is talking about him, and so he called in to "The Arena," to have an argument:

Josh Benson wrote a very good piece yesterday on how Trump -- and Anthony Weiner -- are using Trump for self-promotional reasons (both of them dream of replacing Mike Bloomberg as the testy, grating mayor of New York). But the whole of CNN is now, obviously, using Trump just as much as he is using... everyone in the political press.

Anderson Cooper, CNN's favorite, sexiest anchor -- second in "stature" only to the brainless, droning automaton known as Wolf Blitzer -- devoted the entirety of "Anderson Cooper 360°" last night to Trump, disguised as a special on "definitively debunking" birtherism, a conspiracy theory that has been definitively debunked a thousand times since 2008.

Breaking: Hawaiian officials who have seen relevant documents confirm that the president was born in Hawaii! This has been known for years. The real meat of the special is a testy interview with, yes, Donald Trump, the television star. Trump says very silly things! And those very silly things were immediately packaged into a press release and blasted to reporters and bloggers everywhere.

Trump says contradictory and stupid things about the imaginary "investigators" he sent to Hawaii. Then there is this embarrassing exchange:

Anderson Cooper: We’ve interviewed the former director of the Hawaii Department of Health, a Republican, one of two state officials who’s seen the original birth certificate in the Department of Health vault. She says she hasn’t been contacted by your people. Isn’t that someone they should talk to if they’re there?
Donald Trump: Well I’ve been told very recently, Anderson, that the birth certificate is missing, I’ve been told that’s it not there or it doesn’t exist. And if that’s the case it’s a big problem.
AC: Who told you that?
DT: I just heard that two days ago from somebody.
AC: From your investigators?
DT: I don’t’ want to say who but I’m told that it’s either not there or it’s missing. I feel badly about that because I’d love for him to produce the birth certificate so that you can fight one on one. If you look at what he’s doing on fuel prices, you can do a great fight one on one -- you don’t need this issue.

Coop, I love you, but it is the easiest thing in the world to make Trump look stupid with "tough questions." Especially now that he's committed himself to being the nation's primary adherent of a fantastical (and easily debunked) conspiracy theory.

But I am still proud of CNN, for finally finding some backbone and having the bravery to state that Donald Trump is a buffoon, without also noting, for balance, that some people think Donald Trump is not a buffoon. Baby steps.