A new poll reveals the dangers of U.S. policy in that region, and the lack of change in perception 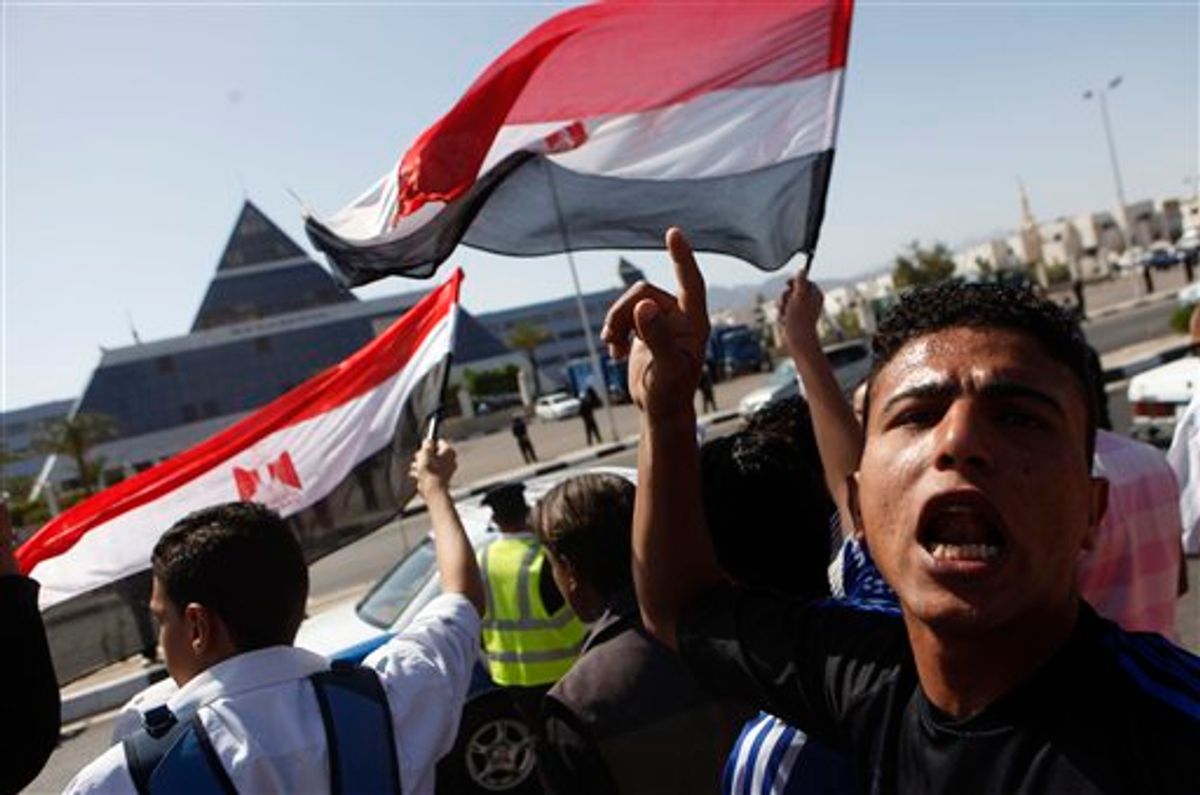 Egyptians shout anti-Mubarak slogans as they demonstrate in front of the hospital where former Egyptian President Hosni Mubarak, 82, is being hospitalized in the Red Sea resort of Sharm el-Sheikh, Egypt, Wednesday, April 13, 2011. Egypt's ousted President Hosni Mubarak was put under detention in his hospital room Wednesday for investigation on accusations of corruption, abuse of power and killings of protesters in a dramatic step Wednesday that brought celebrations from the movement that drove him from office. (AP Photo/Amr Nabil) (AP)
--

One of the central promises of the Obama presidency was that it would "restore America's standing" -- both in the world generally and the Muslim world specifically. In 2008, Andrew Sullivan famously wrote that Obama's face, by itself, would transform how the world perceives of the U.S. for the better: a not unreasonable expectation at the time ("What does he offer? First and foremost: his face. Think of it as the most effective potential re-branding of the United States since Reagan."). It's certainly true that Western Europeans view the U.S. more favorably now than they did during the Bush years (as do other nations who have benefited from his policies, such as India), but there's no evidence that there's been any such improvement in the Middle East, and ample evidence that there hasn't been.

Public opinion in Egypt is very instructive -- and troubling -- in this regard. Americans cheered in consensus for the democratic rebellion against the Mubarak regime. But most Egyptians aren't cheering for America, which long supported that regime until the very end. A new Pew poll was just released -- the first taken since the fall of Mubarak -- and its findings were summarized by today's Washington Post:

The poll found that 39 percent of Egyptians believe the U.S. response to the upheaval in Egypt was negative, almost double the 22 percent who said it was positive. . . .

More Egyptians -- 64 percent -- said they had low or no confidence in President Obama in 2011 than they did last year, up five percentage points.

What's most remarkable about that 20/79 favorability disparity toward the U.S. is that it's worse now than it was during the Bush years (a worldwide Pew poll of public opinion found a 30% approval rating in Egypt for the U.S. in 2006 and 21% in 2007). In one of the most strategically important countries in that region -- a nation that has been a close U.S. ally for decades -- public opinion toward the U.S. is as low as (if not lower than) ever, more than two years into the Obama presidency. Consider the recent Egyptian public opinion history toward the U.S.: 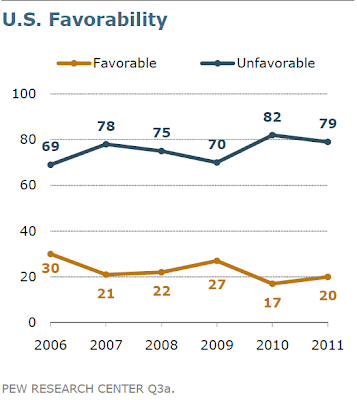 Those findings are even more striking given that Obama chose Cairo as the venue for what was to be his 2009 transformative speech to the Muslim world. Yet at least in Egypt, perceptions of the U.S. are as negative as ever.

It's not hard to see why; the crux of Obama policy -- steadfast support for compliant dictators, endless war-making, blind loyalty to Israeli desires -- is what has long generated intense anti-American sentiment in that part of the world. It's no surprise, then, that the closest U.S. ally who long served as the nation's Vice President and whom the Obama administration tried to empower -- Omar Suleiman -- is now the most unpopular Egyptian politician after Mubarak, with 66% having an unfavorable opinion of him.

Most remarkable about this new polling data is the huge gap between the views of the Arab dictators we prop up and the Arab citizenry generally: the reason why the U.S., despite its lofty rhetoric, wants anything but democracy in that part of the world. Consider, for instance, that "54 percent [of Egyptians] want to annul the peace treaty with Israel, compared with 36 percent who want to maintain it." Moreover, "a majority of the country [62%] wants Egypt’s laws to strictly follow the Koran"; 27% want the law to "follow the values and principles of Islam," while only 5% say the law should "not be influenced by the Koran." And Egyptians are divided in their support for "Islamic fundamentalists," with 31% supportive (1/3 more than have favorable views toward the U.S.). And polls have long shown that Arab citizens generally -- as opposed to their unelected tyrants -- view the U.S. and Israel as far greater threats to world peace than any Iranian nuclear program.

In an article this week for Tom Dispatch, re-published by Salon, Noam Chomsky wrote:

The U.S. and its Western allies are sure to do whatever they can to prevent authentic democracy in the Arab world. To understand why, it is only necessary to look at the studies of Arab opinion conducted by U.S. polling agencies. . . . They reveal that by overwhelming majorities, Arabs regard the U.S. and Israel as the major threats they face: the U.S. is so regarded by 90% of Egyptians, in the region generally by over 75%. Some Arabs regard Iran as a threat: 10%. Opposition to U.S. policy is so strong that a majority believes that security would be improved if Iran had nuclear weapons -- in Egypt, 80%. Other figures are similar. If public opinion were to influence policy, the U.S. not only would not control the region, but would be expelled from it, along with its allies, undermining fundamental principles of global dominance.

This is exactly what he was talking about: ongoing U.S. actions in that part of the world do little other than sustain -- and even intensify -- anti-U.S. sentiments. That makes democracy the least desirable form of government in those countries from the perspective of the U.S. Government (and it's why I was so skeptical of the claim that we were intervening in Libya for humanitarian reasons and, now, to help bring about regime change and democracy there: real democracy is generally the exact opposite of what the U.S. wants in that region).

Whatever else is true, it is simply a fact that -- with a handful of exceptions -- perceptions of the U.S. in the Muslim world are as negative as ever. One can debate how significant that is, but what is undebatable is that a central promise of the Obama presidency has failed to manifest there and, as a result, few things would more potently subvert U.S. policy in that region that the spread of democracy.