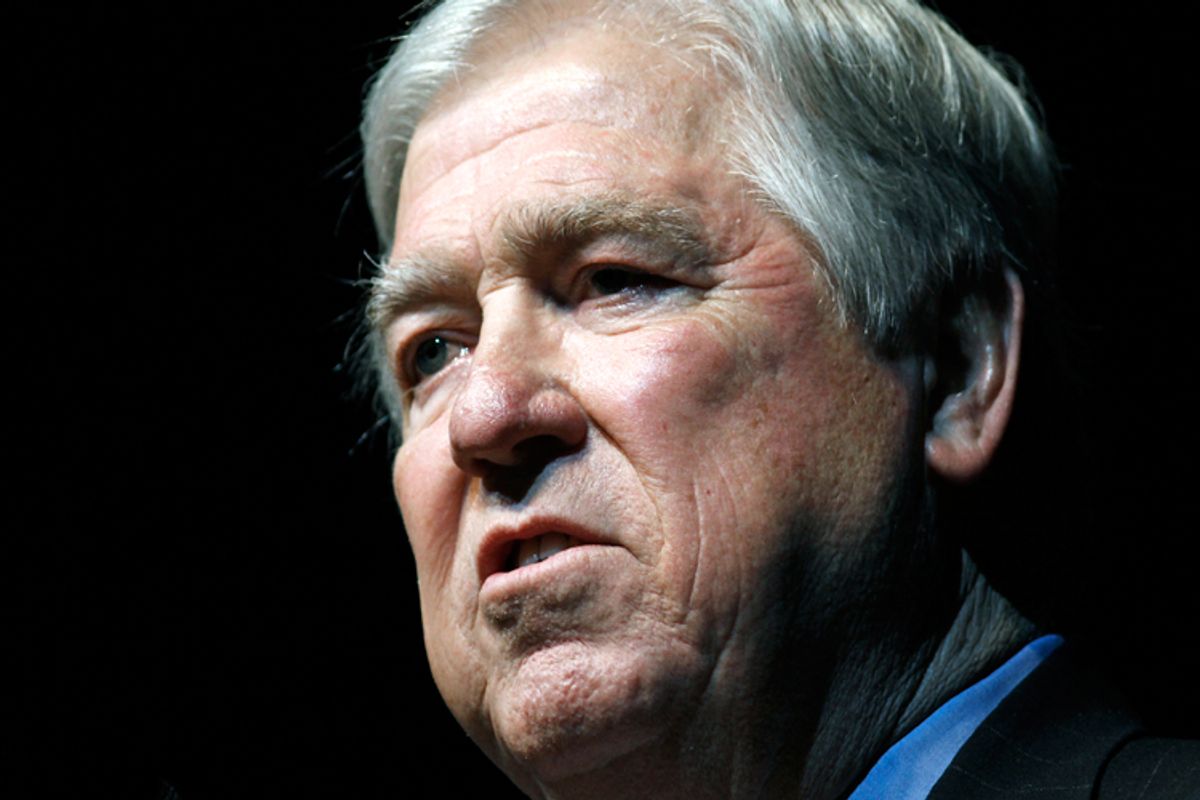 Only a few hours after the Washington Post reported that Mississippi Gov. Haley Barbour was less than a week from his declared deadline to make a decision, "and most expect him to run," Barbour announced the opposite. "I will not be a candidate for president next year," the Republican said in a statement Monday. "A candidate for president today is embracing a ten-year commitment to an all-consuming effort, to the virtual exclusion of all else. His (or her) supporters expect and deserve no less than absolute fire in the belly from their candidate. I cannot offer that with certainty, and total certainty is required."

In a primary field still crowded with people who will never be president, Barbour's departure is nonetheless good and bracing news. Late last year, the man from Yazoo City floated a new Southern strategy in what was probably intended as a positive Weekly Standard profile, and it went nowhere. Barbour told the Standard that racism in his hometown wasn't "that bad," and praised the local chapter of the notorious White Citizens Council for policing the Ku Klux Klan; later he refused the state NAACP's request that he denounce efforts to issue a state license plate to honor KKK founder Nathan Bedford Forrest. I said at the time that Barbour's Weekly Standard comments weren't a gaffe, but a trial balloon for politics in post-Obama America: C'mon, isn't everybody sick of all the whining about racism? It wasn't that bad!

It turns out maybe America isn't ready for a president who wants to say racism wasn't "that bad." Certainly Barbour wasn't ready for a campaign in which his efforts to whitewash the past came in for scrutiny and even criticism, rather than praise. Barbour was also stuck trying to sell his past as a lobbyist and ultra-D.C. insider as an asset in a party whose Tea Party base is rejecting insiders.

In a short post on Barbour's decision, CNN added this observation: "Although he is popular among Washington insiders, he has had trouble gaining traction in recent national polls." That's what makes Barbour's statement so petulant; rather than acknowledging his limited electoral appeal, he's saying he's just not that into us and can't make a 10-year commitment. Please.

The conventional wisdom is that Barbour's decision helps his friend Mitch Daniels, the Indiana governor who seems to be the Beltway's crush of the week (the way Fred Thompson was four years ago). A glowing Washington Post profile just this morning lamented that despite his alleged leadership on debt and deficit issues, Daniels still seems reluctant to run for president. The Indiana Republican even has a catchy slogan, calling debt the "new red menace," comparable to the Soviet Union's nuclear threat.

A couple of things about Daniels' crusade against deficit spending. First, let's remember that during the last decade of the Cold War, at least, the Soviet Union turned out not to be much of a threat; in the short term, deficit spending isn't either. Then and now, "the red menace" is just one in a long series of GOP slogans designed to foment fear, not problem-solving. Maybe more important, it's pretty incredible to see George W. Bush's former budget director hailed as a deficit hawk, having worked for the man who sank the Clinton budget surplus in a tide of red ink. But Daniels is another guy Beltway insiders think is "serious." He's not much more likely to be president than Haley Barbour, but we'll have to take him seriously for a while nonetheless.

All of this might seem to benefit Mitt Romney, the nominal GOP front-runner, except Romney can't get out of his own way. He just accused President Obama of engaging in "one of the biggest peacetime spending binges in American history." That would be a catchy charge, except with wars in Iraq and Afghanistan, this isn't peacetime. The president who ran up the largest peacetime deficit in history, by the way, was Ronald Reagan. And in case you're inclined to think maybe Romney just misspoke on the campaign trail, he denounced Obama's "peacetime spending" in an op-ed for the Union-Leader in New Hampshire.