Is there a real candidate left in this race?

The longer the economy struggles, the more vulnerable Barack Obama looks for 2012. Unless ... 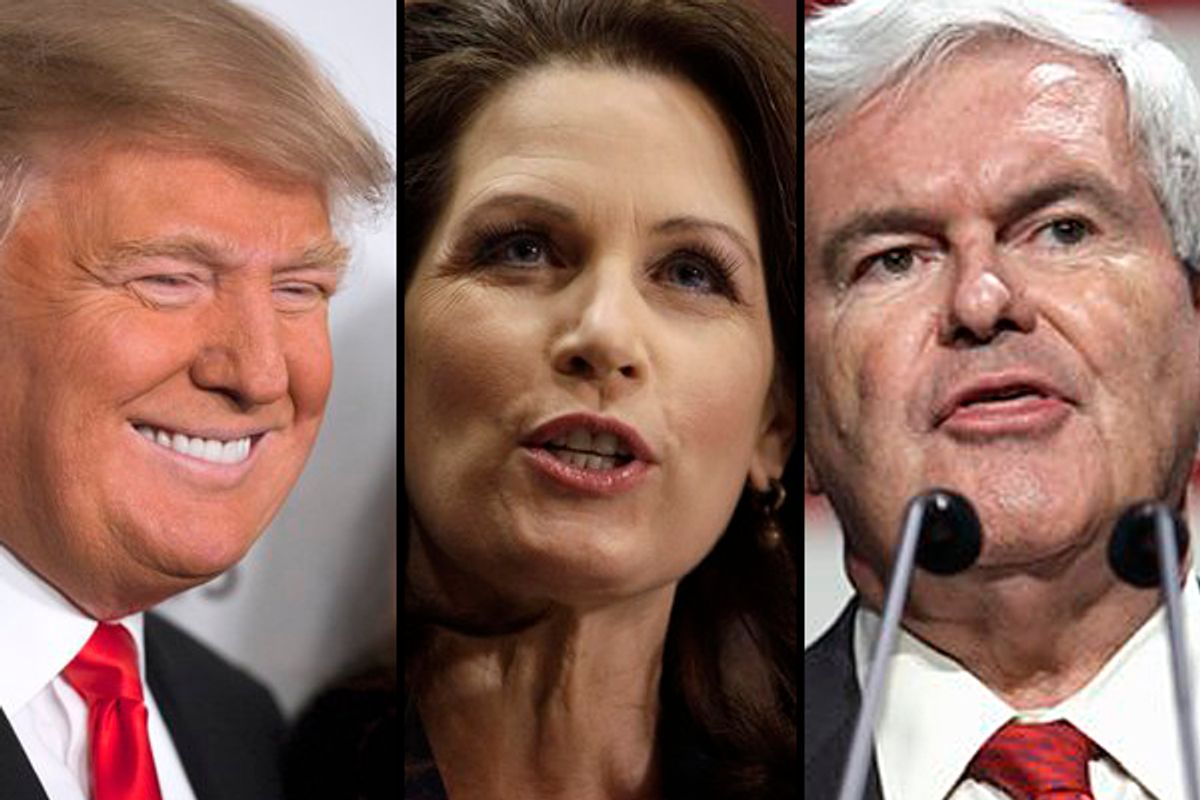 You would think that an opposition party coming off a monster midterm election performance would have no trouble attracting a pool of competent, qualified and electable candidates to oppose a president who is plagued with dangerously low approval ratings and an economy that has been painfully slow to recover from a recession.

And yet, the current Republican presidential field contains all of two candidates who it can reasonably be said fit this description: Mitt Romney and Tim Pawlenty. Mike Huckabee, if he chooses to run, could potentially make for three. And Mitch Daniels, who has attracted intense curiosity from the conservative think tank world but not much else, might conceivably be the fourth (if he runs).

Then there are the rest: Michele Bachmann, Rick Santorum, Newt Gingrich, Herman Cain, Roy Moore, Buddy Roemer, Jon Huntsman and maybe even Sarah Palin. None of them has a reasonable chance of winning the nomination, and just about all of them would be disastrous general election candidates for the party. (In fairness, Roemer, a long-ago Louisiana governor, and Huntsman might not actually be horrible nominees, but they are pretty clearly no-shot prospects for the nomination.) If you want to include Donald Trump in the mix (even though he will almost certainly stand down after a few more months of publicity), the same applies: Party elites will strain themselves to undermine him if he does enter the primaries, and if he did somehow win the nomination, his polarizing attributes would cost the party dearly in November.

How has it come to this for the GOP?

Part of the explanation can probably be found in a point Jonathan Bernstein has made: that other potentially electable candidates have already been winnowed out of the field, casualties of the "invisible primary." For instance, Haley Barbour and John Thune both at least had some potential to win key support from the conservative establishment and to gain the nomination; and as nominees, it was not impossible to imagine them defeating Obama under the right (i.e. bad) economic conditions. (Granted, Barbour comes with a giant asterisk, since his tin ear for race threatened to make him a hard sell to bottom line-minded GOP elites.) They both tested the waters, determined they weren't likely to gain traction as candidates for the nomination, and withdrew. You might say the same for Sen. John Ensign, who seemed ready to pursue the '12 nomination before a scandal sank him.

We've seen this happen before. In the early months of 1995, the next year's GOP nomination was thought to be a prize. Then, as now, the GOP had just posted a massive midterm landslide and President Clinton's poll numbers were still under 50 percent. But Jack Kemp, Dick Cheney, Dan Quayle, Lynn Martin, Bill Bennett, Bill Weld, Tommy Thompson, and John Engler all formally passed on the 1996 race long before Iowa and New Hampshire. Most, if not all of them, had been behaving like candidates before declining to run. That left Republicans with a disproportionate number of fringe and/or no-shot candidates once the primary season began: Robert Dornan, Alan Keyes, Morry Taylor and Pat Buchanan (even if he did win New Hampshire).

But even with winnowing now taking place, the GOP race remains unusually wide open. As candidates for the nomination, both Romney and Pawlenty have some serious liabilities. There is plainly room for another candidate to enter the race -- someone who can stir the passions of the base (something neither Romney nor Pawlenty has shown much skill at) in a way that doesn't alarm elites (like Bachmann and Gingrich and all of the others do).

Huckabee might actually fit this bill; as I've noted before, his popularity with Republican voters has only increased since his 2008 campaign. Among Republicans, he is now the party's most well-liked national figure. In '08, he was hindered by elite skepticism: His poorly funded and disorganized campaign along with his Baptist preacher background, they figured, would make him a poor fall candidate. If Huckabee were to run now, he would at least have an opportunity to overcome many of these doubts.

Beyond Huckabee, though, there just aren't many realistic options for Republicans looking for an alternative to Romney and Pawlenty. I've written over and over that Chris Christie would be well-positioned to fill the void, but -- for reasons having to do with his political survival in New Jersey -- it would take an awful lot to get him to back off his insistence that he's not going to run. Jeb Bush's name is also frequently mentioned, and he could probably satisfy both the base and the elites ... if the Bush family wasn't such an enormous electoral liability. That's really the extent of the GOP's darkhorse possibilities. That the name of Rep. Paul Ryan, author of the budget that congressional Democrats are eagerly waiting to run against in 2012, is now being connected to the White House race is the clearest sign yet of how devoid of genuine national talent the GOP bench is these days.

Contrast the GOP's plight to what Democrats were facing 20 years ago at this time, when what seemed like one of the thinnest, weakest presidential fields in history assembled itself: Tom Harkin, Bob Kerrey, Paul Tsongas, Jerry Brown, Doug Wilder and Bill Clinton. But as B-list as those candidates seemed, they were at least mainstream enough that they wouldn't cost Democrats natural support as general election candidates. Moreover, there were plenty of potential white knights on the sidelines, and for good reason: In the wake of the first Gulf War in early 1991, President George H.W. Bush looked unbeatable. Thus, every big-name Democrat, from Mario Cuomo to Al Gore, passed on the race.

Of course, we also remember that the '92 campaign ended with a victory for Clinton, thanks to what voters perceived to be a rotten, stalled economy. For similar reasons, 2012 could just as easily end in victory for the GOP. But the climate will have to be right and the party will have to nominate a candidate capable of taking advantage of it. What's remarkable is how few of today's Republican leaders fit that bill.

I was on MSNBC Tuesday night with Cenk Uygur and the Washington Post's Dana Milbank to talk about the GOP's oddball cast of candidates. Here's the video: