Why Lindsay Lohan won't be winning an Oscar by 30

The soon-to-be-incarcerated star of the new Gotti film thinks a comeback is right around the corner. It's not 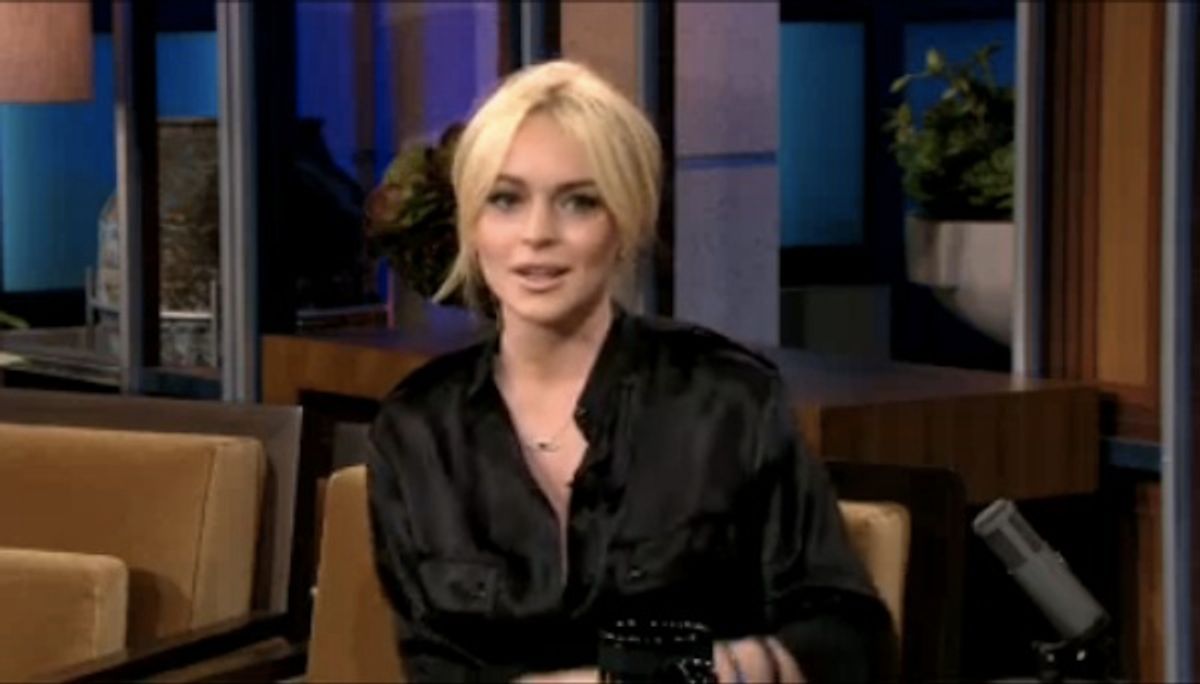 Lindsay Lohan made a surprise appearance on late night television yesterday, and first of all, can I just give a class-act award to Jay Leno for not starting out this interview asking Lindsay how she felt about going to work in a morgue? (For those who don't know, Lindsay was sentenced to community service in a mortuary, which is kind of awesome.) Because honestly, I know that is what is on the tip of America's tongue: "How are you going to deal with all those dead bodies, Lindsay?" That is what I want to know. "Also, all that jail? Of which there still might be more? How do you feel about that?" So honestly Jay, well done waiting at least 10 minutes before diving into that.

After all, why else is Lindsay Lohan appearing on talk shows, if not to discuss her impending incarceration? Oh right, she's in that Gotti movie. Oh well, let's discuss that for a bit:

I can't even figure if this Gotti film is a real movie or some made-for-TV thing. Anyway, let's get to the heart of the matter: Lindsay wants to win an Academy Award by 30. Can I just go out on a limb here and say that the way things are going, that's probably not going to happen? Just looking at the facts, the last movie Lohan "starred" in was "Herbie Fully Loaded" in 2005. She is currently 24 years old. That means she has six years left to undo six years of bad P.R. and make a "comeback" on par with Mickey Rourke's in "The Wrestler." (Except better, since Rourke didn't actually win for Darren Aronofsky's study of a broken-down piece of meat, did he?)

In order for Lindsay Lohan to actually win an Academy Award, she would have to stay out of the public spotlight long enough that she could make such a comeback. Look at Robert Downey Jr., Rob Lowe or even Drew Barrymore: after a series of embarrassing drug-related incidents they all disappeared for a while, only to come back with better career choices than ever. And by "a while" I don't mean they took a break for a couple months: I mean years.

But Lindsay can't do that. Thanks to TMZ, the paparazzi and people who make comic books about her jail time, her celebrity narcissistic personality disorder (as Dr. Drew might call it) is just being fed mercilessly. Think about it, she wasn't on Jay Leno to talk about the Gotti film: that was just a pretense to talk around the real interest we have in Lindsay as a failed human being. Lindsay, if you want an Academy Award, you need to do your prison stint out of the public eye. You need to go to rehab. You need to lay low and not do any interviews … hell, don't even do this Gotti movie. Maybe by the time you're 29, you'll be ready for that comeback role, perhaps playing Bree Olson in a movie about Charlie Sheen's life.