Should Google ban a dogfighting app? 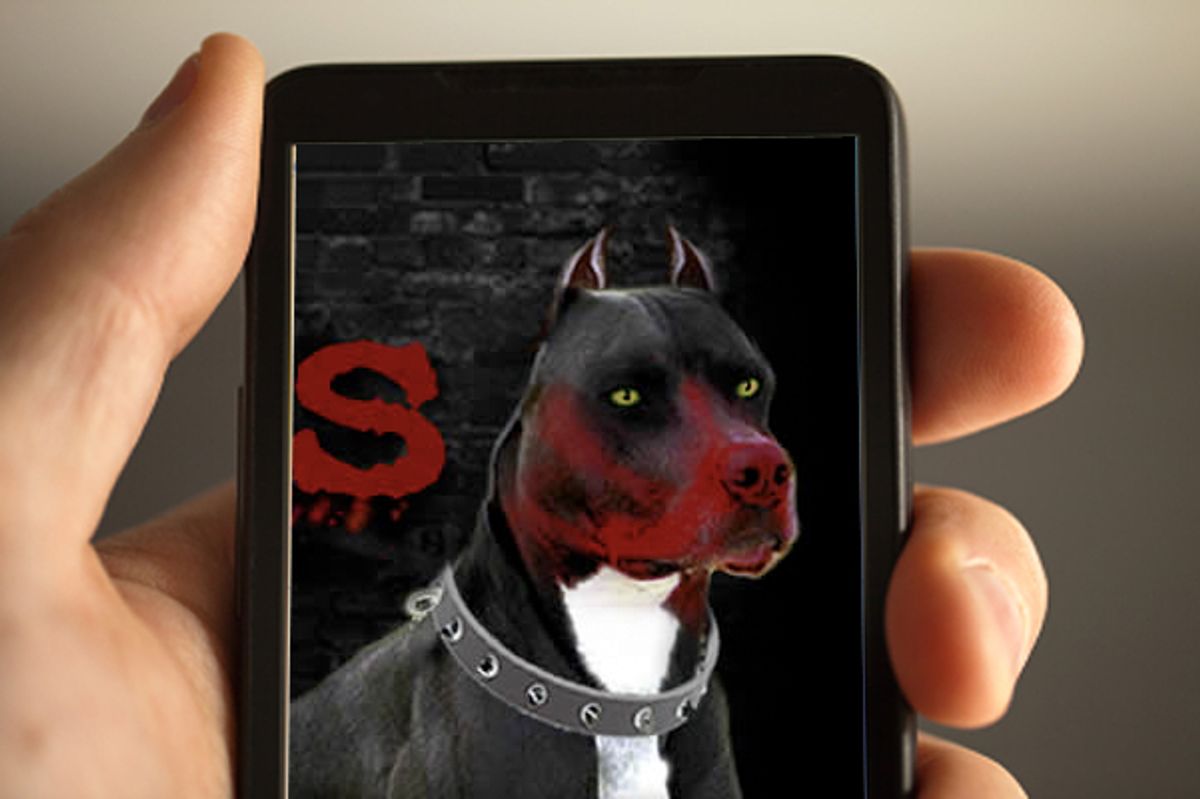 A game app is, by virtue of its nature, a visit to the world of pretend. But if you can download an app to hunt a deer -- or slay an enemy in battle -- why recoil at one that simulates the world of dogfighting?

When the beta version of "Dog Wars" became available on Android earlier this month, it swiftly sparked outrage for its cruel premise: giving players the opportunity to "feed, water, train, and FIGHT your virtual dog against another player's." The app, by Kage Games, has attracted the attention of actress and animal rights advocate Alicia Silverstone, who wrote an open letter to Google CEO Larry Page stating that "I join PETA's millions of members in imploring you to cancel this game immediately. If one dog dies as a result of this game, you will not forgive yourself." And Philadelphia Eagles quarterback Michael Vick, who served nearly two years in jail for his role in a dogfighting ring, continued his campaign against the practice by issuing a statement via the Humane Society: "I've come to learn the hard way that dog fighting is a dead-end street. Now, I am on the right side of this issue, and I think it's important to send the smart message to kids, and not glorify this form of animal cruelty, even in an Android app." The sentiment was echoed among gamers – commenters on Google's Android forum were generally in consensus over its status as "most offensive game ever."

It seemed for a brief time that the outcry over the vicious game might have had an effect – SF Weekly and other outlets reported Wednesday that the app was being pulled. But as of Thursday it remains available – its image of a dog with a blood-red-streaked face and its promise of racking up "street cred" or "police heat" defiantly still out there for the downloading.

It would be hard to argue that turning animal cruelty into entertainment is anything short of revolting. And the developers' absurd argument, issued in a statement Monday, that that the app represents a "net benefit to dogs" because they promise to give a portion of the proceeds to animal rescue organizations, rings phenomenally hollow. It's a safe bet that when your email is pitboss@kagegames.com, you're not trying to broadcast your respect for all living creatures to the world. "This is a satire about the ridiculousness of dogfighting and we believe in the power of a modern media tool to educate and raise awareness of the real horrors," said the developers, which is flat-out pathetic from an app that promises a chat room to "talk fight or talk smack with other players" and teaches players to "train and feed your dog before you can fight," and brags it's "a game that will never be in the iPhone app store!"

But even douchebags can make somewhat legitimate points, and the folks at Kage are correct that "just because something is illegal in real life in certain countries, does not mean it is illegal to make a song, movie or video game about it." And while their challenge to "go complain to someone who cares about Call of Duty, Grand Theft Auto, Weed Farmer, Smoke a Bowl" and  "just go slingshot some virtual birds to kill some virtual pigs" is a rather simplistic way of putting it, they do raise a legitimate point about the nature of gaming – much of which equates killing with winning. "Dog Wars," after all, doesn't violate the Android terms of service. Why then, is an app about killing pigs a wildly successful phenomenon, while one about dogfighting is outrageous?

Judging from the response the app has generated, the reason is clear: There's a difference between cartoony fantasy – which is why wasting zombies or zapping monsters never goes out of style – and something that resonates closely with a real criminal activity against defenseless living creatures. And there's a huge difference between playing an antihero gangster and simply pretending to be an abuser. As Wayne Pacelle, president and CEO of the Humane Society, explains, "Because 'Dog Wars' actually instructs players on how to condition a dog using methods that are standard in organized dog fighting, this game may be a virtual training ground for would-be dogfighters. Its timing and message are all wrong." It doesn't matter if it doesn't violate any terms of service. It chafes against basic human nature. And when there are no real bad guys to fight, there is no imaginary glory to savor. There's just the fantasy of dead dogs.