The futility of reasoning with crazy 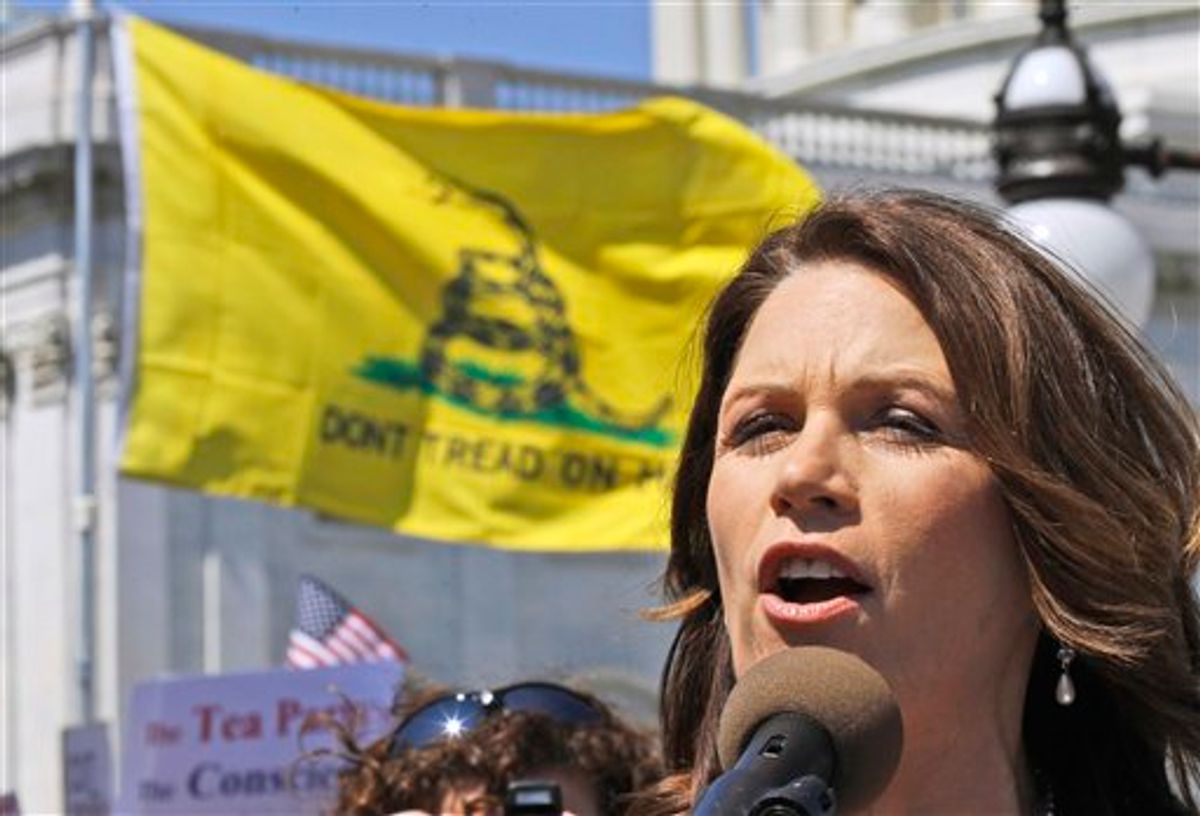 FILE - In this April 6, 2011 file photo, Rep. Michele Bachmann, R-Minn. addresses an Americans for Prosperity "Cut Spending Now," rally on Capitol Hill in Washington. Its the weird issue that wont go away, and its forcing GOP presidential contenders and other Republican leaders to pick sides: do they think President Obama was born outside the United States and is therefore disqualified to be president? Polls show that a remarkable two-thirds of all Republican voters either think Obama was born abroad or they arent sure. With Donald Trump stirring the pot, other potential candidates are distancing themselves from his comments to varying degrees. (AP Photo/Alex Brandon, File) (AP)
--

Americans used to pride themselves on being a practical people, largely immune to religious and political dogmatism. Commonsense and know-how were universally seen as virtues. Crackpots and zealots of the David Koresh, Jim Jones type have abounded, but rarely commanded a mass following.

"It ain't so much the things we don't know that get us into trouble. It's the things we know for sure that just ain't so." This proverbial expression so perfectly sums up American pragmatism that it's been wrongly attributed to upwards of a half dozen wise men, ranging from Mark Twain and Will Rogers to Yogi Berra. It actually appears to have been the tag line of humorist Josh Billings, a sort of 19th century Jeff Foxworthy.

Today, Billings would be scorned as an elitist and chastised for incivility. Unfortunately, when it comes to politics a sizable proportion of our fellow Americans have abandoned reason for demonic conspiracy theories, magical thinking and miracle cures.

Increasingly, one of our two great political parties appears to be governed by what Charles P. Pierce calls the "Three Great Premises" of talk radio: "First Great Premise: Any theory is valid if it moves units ... Second Great Premise: Anything can be true if someone says it loudly enough ... Third Great Premise: Fact is that which enough people believe. Truth is measured by how fervently they believe it."

Maybe it's hard times, and maybe it's an African-American president with an odd name, but several leading contenders for the 2012 GOP nomination express ideas that might lead to involuntary hospitalization anywhere outside a Tea Party rally or a TV studio.

After all, it'd be one thing for me to believe I was secretly married to Juliette Binoche; quite another to fly to Paris to seek her out.

Consider Donald Trump. This preposterous self-promoter has been near-ubiquitous, expressing Looney Toons notions about President Obama previously confined to emailers who write in all caps: "WHEN ARE YOU GUYS GOING TO GET AWAY FROM THE KOOL-AID LONG ENOUGH TO START LOOKING INTO THIS MANCHURIAN CANDIDATE?"

Confronted with Obama's certified birth certificate by ABC's George Stephanopoulos, even noted flake Rep. Michele Bachmann abandoned the conspiracy theory of the president's origins. (I'm betting she already regrets this lapse into temporary sanity.) Leading Republicans such as Karl Rove and Arizona Gov. Jan Brewer have argued that "birtherism" makes sensible voters think of the GOP as the Nut Party.

So naturally Trump's emerged as the odds-on favorite to win the Republican nomination, assuming he seeks it. (Trump release his income tax records? I don't think so. The man bankrupted several casinos.) So while I don't think he believes the nonsense he spouts, what's he up to? Alas, the simplest explanation is that he's running.

Alas that's merely the tip of the proverbial iceberg where GOP delusional thinking is concerned. Judging by my inbox, a large proportion of angry white men also believe that the burst housing bubble and financial meltdown of 2007-8 were caused by -- wait for it -- President Jimmy Carter. A version of this poisonous myth has been popularized by syndicated columnist Thomas Sowell.

And how did a minority congressman do that? Frank would resent being called a "minority" one guy answered. Uh oh, I think we've touched bottom. There's no point mentioning W's advocacy of sub-prime lending to somebody with no clue how the U.S. government works.

Also contrary to Republican mythology, the infamous Bush tax cuts did anything but increase revenue, as tax cuts never do. As Fiscal Times columnist Bruce Bartlett shows, federal revenues dropped from 20.6 percent of GDP in 2000 to 18.5 percent in 2007. The 2008 recession dropped them to 14.9 percent, where they linger today -- the proximate cause of current huge budget deficits.

Ah, but here's the tricky part. GOP delusional thinking's not merely impervious to reality, it's also not confined to the Republican Party. Every public opinion poll extant shows that large majorities of voters want no reductions to Medicare, Medicaid and Social Security. Oh, and no new taxes.

By a 2-to-1 majority, Americans also think that Congress should refuse to increase the national debt limit.

People wouldn't say that if they understood the consequences. Alas, sometimes the things you don't know can also hurt you.