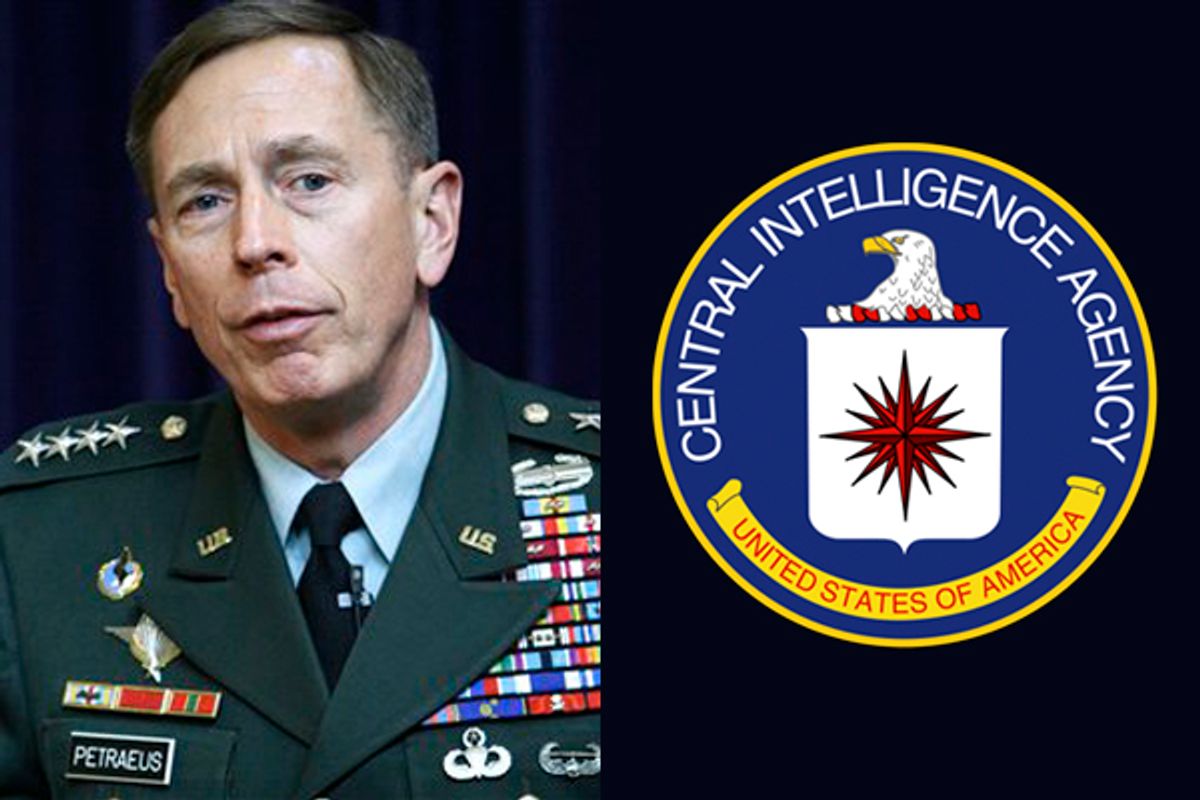 In a March 23, 2011 photo U.S. General David Petraeus, Commander of NATO International Security Assistance Force and US Forces Afghanistan, addresses Royal United Service Institute members on 'The Mission in Afghnistan' in London. President Barack Obama is likely to name seasoned diplomat Ryan Crocker as the next U.S. ambassador to Afghanistan, reuniting Petraeus and Crocker who are credited with rescuing the American mission in Iraq. (AP Photo/Sang Tan) (Sang Tan)
--

The first four Directors of the CIA (from 1947-1953) were military officers, but since then, there has been a tradition (generally though imperfectly observed) of keeping the agency under civilian rather than military leadership. That's why George Bush's 2006 nomination of Gen. Michael Hayden to the CIA provoked so many objections from Democrats (and even some Republicans).

The Hayden nomination triggered this comment from the current Democratic Chairwoman of the Senate Intelligence Committee, Dianne Feinstein: "You can't have the military control most of the major aspects of intelligence. The CIA is a civilian agency and is meant to be a civilian agency." The then-top Democratic member of the House Intelligence Committee, Jane Harman, said "she hears concerns from civilian CIA professionals about whether the Defense Department is taking over intelligence operations" and "shares those concerns." On Meet the Press, Nancy Pelosi cited tensions between the DoD and the CIA and said: "I don't see how you have a four-star general heading up the CIA." Then-Sen. Joe Biden worried that the CIA, with a General in charge, will "just be gobbled up by the Defense Department." Even the current GOP Chair of the House Intelligence Committee, Pete Hoekstra, voiced the same concern about Hayden: "We should not have a military person leading a civilian agency at this time."

Of course, like so many Democratic objections to Bush policies, that was then and this is now. Yesterday, President Obama announced -- to very little controversy -- that he was nominating Gen. David Petraeus to become the next CIA Director. The Petraeus nomination raises all the same concerns as the Hayden nomination did, but even more so: Hayden, after all, had spent his career in military intelligence and Washington bureaucratic circles and thus was a more natural fit for the agency; by contrast, Petraues is a pure military officer and, most of all, a war fighting commander with little background in intelligence. But in the world of the Obama administration, Petraeus' militarized, warrior orientation is considered an asset for running the CIA, not a liability.

That's because the CIA, under Obama, is more militarized than ever, as devoted to operationally fighting wars as anything else, including analyzing and gathering intelligence. This morning's Washington Post article on the Petraeus nomination -- headlined: "Petraeus would helm an increasingly militarized CIA" -- is unusual in presenting such a starkly forthright picture of how militarized the U.S. has become under the 2009 Nobel Peace Prize winner:

Gen. David H. Petraeus has served as commander in two wars launched by the United States after the Sept. 11, 2001, attacks. If confirmed as the next director of the Central Intelligence Agency, Petraeus would effectively take command of a third -- in Pakistan.

Petraeus's nomination comes at a time when the CIA functions, more than ever in its history, as an extension of the nation's lethal military force.

CIA teams operate alongside U.S. special operations forces in conflict zones from Afghanistan to Yemen. The agency has also built up a substantial paramilitary capability of its own. But perhaps most significantly, the agency is in the midst of what amounts to a sustained bombing campaign over Pakistan using unmanned Predator and Reaper drones.

Since Obama took office there have been at least 192 drone missile strikes, killing as many as 1,890 militants, suspected terrorists and civilians. Petraeus is seen as a staunch supporter of the drone campaign, even though it has so far failed to eliminate the al-Qaeda threat or turn the tide of the Afghan war. . . .

Petraeus has spent relatively little time in Washington over the past decade and doesn’t have as much experience with managing budgets or running Washington bureaucracies as CIA predecessors Leon E. Panetta and Michael V. Hayden. But Petraeus has quietly lobbied for the CIA post, drawn in part by the chance for a position that would keep him involved in the wars in Afghanistan, Pakistan, Iraq and Yemen.

It's rare for American media outlets to list all of our "wars" this way, including the covert ones (and that list does not even include the newest one, in Libya, where drone attacks are playing an increasingly prominent role as well). But Barack Obama does indeed preside over numerous American wars in the Muslim world, including some that he started (Libya and Yemen) and others which he's escalated (Afghanistan and Pakistan). Because our wars are so often fought covertly, the CIA has simply become yet another arm of America's imperial war-fighting machine, thus making it the perfect fit for Bush and Obama's most cherished war-fighting General to lead (Petraeus will officially retire from the military to take the position, though that obviously does not change who he is, how he thinks, and what his loyalties are).

One reason why it's so valuable to keep the CIA under civilian control is because its independent intelligence analyst teams often serve as one of the very few capable bureaucratic checks against the Pentagon and its natural drive for war. That was certainly true during the Bush years when factions in the CIA rebelled against the dominant neocon Rumsfeld/Wolfowitz/Feith clique, but it's been true recently as well:

Others voiced concern that Petraeus is too wedded to the wars in Afghanistan and Iraq -- and the troop-heavy, counterinsurgency strategy he designed -- to deliver impartial assessments of those wars as head of the CIA.

Indeed, over the past year the CIA has generally presented a more pessimistic view of the war in Afghanistan than Petraeus has while he has pushed for an extended troop buildup.

That's why, noted The Post, there is "some grumbling among CIA veterans opposed to putting a career military officer in charge of an agency with a long tradition of civilian leadership." But if one thing is clear in Washington, it's that neither political party is willing or even able to stand up to the military establishment, and especially not a General as sanctified in Washington circles as Petraeus. It's thus unsurprising that "Petraeus seems unlikely to encounter significant opposition from Capitol Hill" and that, without promising to vote for his confirmation, Sen. Feinstein -- who raised such a ruckus over the appointment of Hayden -- yesterday "signaled support for Petraeus."

The nomination of Petraeus doesn't change much; it merely reflects how Washington is run. That George Bush's favorite war-commanding General -- who advocated for and oversaw the Surge in Iraq -- is also Barack Obama's favorite war-commanding General, and that Obama is now appointing him to run a nominally civilian agency that has been converted into an "increasingly militarized" arm of the American war-fighting state, says all one needs to know about the fully bipartisan militarization of American policy. There's little functional difference between running America's multiple wars as a General and running them as CIA Director because American institutions in the National Security State are all devoted to the same overarching cause: Endless War.

I'm excited to be speaking tonight at FAIR's 25th anniversary event in New York, along with Noam Chomsky, Amy Goodman and Michael Moore. The event, which begins at 7:00 p.m., is sold out, but will be live-streamed in its entirety here.