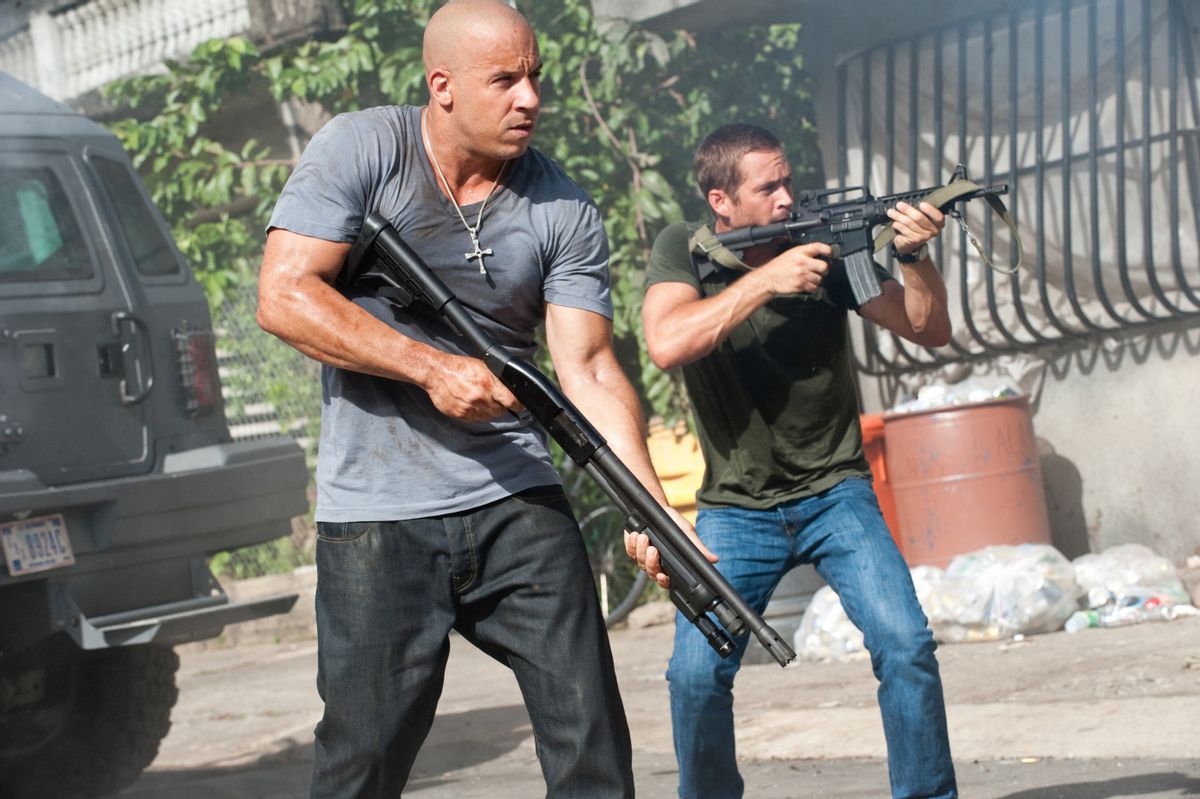 There are various reasons to root for "Fast Five," an adrenalized, hip-hop-fueled action sequel that gets the summer movie season off to an early, roaring start this weekend. As mind-numbing urban-destruction movies go, it's carefully crafted and gorgeously photographed, with plenty of pumped-up bodies, juiced-up cars, Rio de Janeiro scenery and chase sequences of byzantine complexity and unremitting intensity.

When director Justin Lin and screenwriter Chris Morgan took over the fading street-racing franchise with its 2006 third installment, "The Fast and the Furious: Tokyo Drift" (basically an offshoot that dumped the original cast), it seemed at first like a classic Hollywood attempt to pander to minority audiences with a second-rate product. But that movie performed well enough that Lin was given a crack at rebooting the franchise with "Fast & Furious" in 2009, a huge hit that reunited original stars Vin Diesel, Paul Walker, Jordana Brewster and Michelle Rodriguez (and outdid the original 2001 "Fast and the Furious" at the box office). "Fast Five" subtracts Rodriguez but brings back Chris "Ludacris" Bridges, Tyrese Gibson, Gal Gadot and Sung Kang for an "Ocean's"-type heist flick that pits the street racers against a Brazilian crime lord and a massively ripped federal agent, played by Dwayne "The Rock" Johnson with a Mephistophelean beard and a bunch of snappy one-liners.

All action movies appeal to young, multiracial audiences -- that's axiomatic in the film industry -- but at the risk of descending into essentialism, I think Lin speaks that language in a way many white directors simply can't. His multiculti cast and hip-hop sensibility don't come across as patronizing or cynical. If Diesel's Italian-Catholic Dom Toretto and Walker's bland, J. Crew-lookin' Brian O'Conner remain the nominal protagonists, the real hero of "Fast Five" is the Obama-era stew of cultures, languages and mannerisms around them. The exuberant New York audience I watched a preview with applauded the arrival of Bridges and Gibson as if they were watching live theater, and went collectively nuts when Johnson's imposing frame filled the screen.

Of course the characters in this franchise, simultaneously larger than life and undercooked, aren't really the point. "Fast Five" is a movie about crass materialism, masculine sentimentality and extreme violence, all of them exaggerated to the point of caricature. This reaches its ludicrous apogee when Toretto gives what's supposed to be an inspirational address to the troops, Henry V style, right before the big heist. "Money can come and go," he tells them, in a voice that's meant to be emotional (at least by Vin Diesel standards), "but the most important thing in life is the people in this room." Hang on a sec, Mr. Toretto -- the $100 million you guys are about to steal, at massive risk to life and liberty, is less important than the transitory group of criminals you've assembled to steal it? OK, that settles it: Let's bag the whole master plan, grab some beer and cold cuts, and go to the beach.

Somebody who's watched as many crime thrillers and horror movies as I have has no right to get exercised when a film like this one valorizes naked greed or racks up a huge body count. But here's another sense in which "Fast Five" feels very much of the moment: It appeals to the most crude and blatant fantasies about money and freedom -- freedom from work, freedom from prosecution, freedom from capitalism, freedom from being an American -- and the characters' macho bonhomie can't conceal a vicious, violent anger. Thugs and cops and federal agents and even members of Toretto and O'Conner's gang get blown away by the fistful, and that's fair game. But there are also numerous scenes of civilian carnage that Lin speeds right past without acknowledging: Our heroes drive through the first floor of a crowded office building, dragging a 25-ton steel safe behind them; demolish any number of passing vehicles; demolish a bus shelter.

Now, we don't see a middle-aged drone splattered in that office building, or an old lady sent straight from that bus shelter to heaven, but that's not exactly the point. People got killed or they didn't, and either way it was just chance. The so-called heroes of this video-game universe evince absolutely no concern for human life, and treat the ordinary citizens of Rio as meaningless extras in the continuing drama of their profound coolness and hotness. (I noticed something similar in "The Green Hornet," which I can now see was trying, with almost no success, to rip off this franchise.) I realize it's a bit late in the day to act shocked about this, and from a media-theory point of view, you could even argue that it's a form of honesty: "Fast Five" is a fantasy that in no way resembles real life; ordinary morality doesn't apply, and the audience knows that as well as the filmmakers do.

Still, if you view this kind of movie as a form of wish-fulfillment, the wishes being expressed are both brutal and infantile -- endless cars, endless chicks, widespread destruction and total godlike mastery of your surroundings -- and make the phony sophistication of, say, the Bond films or the "Mission: Impossible" series seem as antique as a 1920s musical. That force of chaotic and unsatisfiable desire that Freud called the id is much closer to the surface in a movie like "Fast Five" than ever before in action-cinema history, and part of Lin's peculiar genius is that he barely tries to conceal it. When Roman, Tyrese Gibson's character, hears about Toretta's impossible-sounding scheme to rob Rio's biggest drug lord of all his cash, he walks away in dismay. When told what his take will be -- just over $11 million -- he struts back to the circle, flashing his best don't-hate-the-playa smile: "That sounds like a whole lot of vaginal activity to me!"