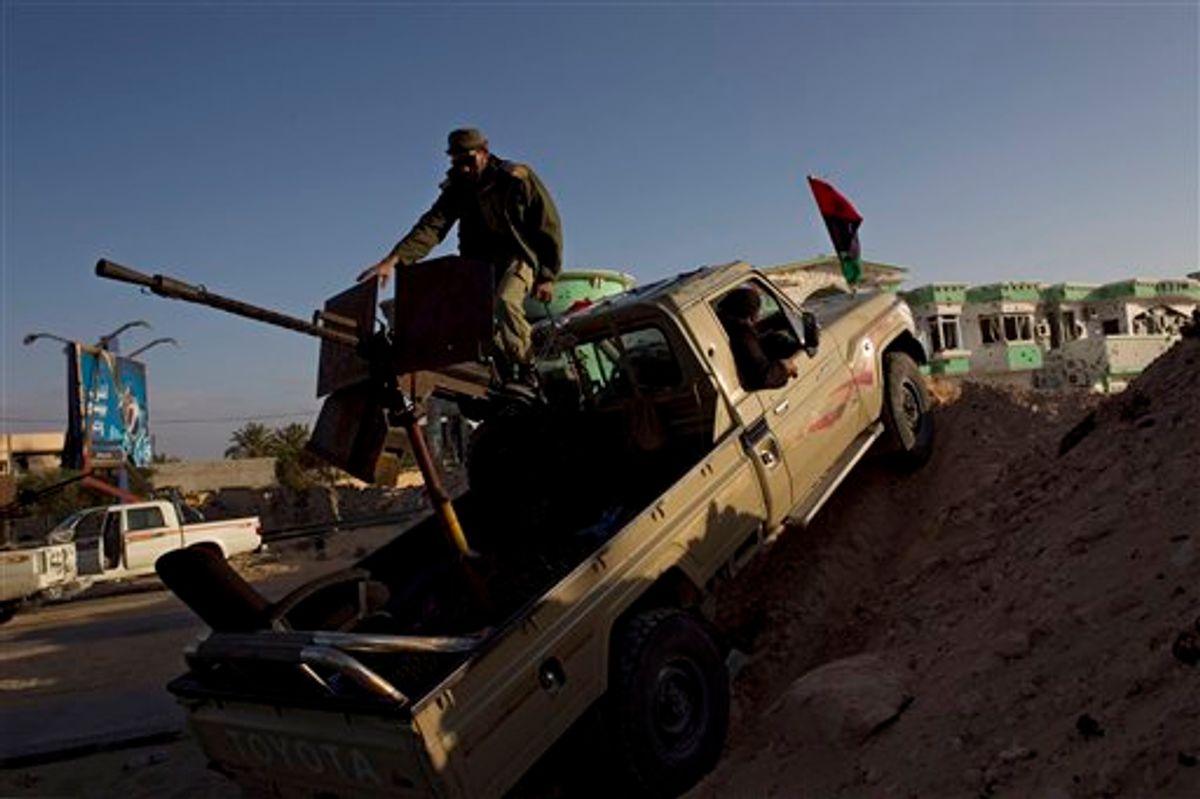 Libyan forces in more than a dozen military vehicles and armed with anti-aircraft guns and rocket launchers crossed the border with Tunisia and were involved in clashes in a frontier town Friday, witnesses said. Tunisia's government was outraged and demanded Libya halt all incursions into its territory.

There were different accounts from witnesses of exactly what happened in the Tunisian border town of Dhuheiba, about three miles (five kilometers) from the border. But several said Tunisian troops captured and disarmed some of the loyalists of Libya leader Moammar Gadhafi and drove others out of town. Three Tunisians were hurt, they said.

The Tunisian government expressed "extreme indignation" over the violation of its territory.

Another witness said Libyan troops clashed with Libyan rebels in Dhuheiba before they were defeated by Tunisian troops. Some of the Libyans were captured and the others chased out, said the witness, who only gave his first name, Akram, for fear of reprisals.

"Gadhafi forces are no longer in Dhuheiba. They were defeated," he said.

The Tunisian news agency TAP said Tunisian forces fired in the air, but did not clash with Libyan troops.

Dhuheiba resident Mohamed Hedia said angry civilians in the town and the families of Libyan rebels who had been staying there set upon the Gadhafi troops, creating a "chaotic situation." Tunisian forces fired warning shots, Hedia said.

The Dhuheiba border crossing between Libya and Tunisia has been a flashpoint in recent days. The crossing has been changing hands repeatedly between rebels and regime forces.

At some point Friday, rebels retook the crossing, according to an Associated Press Television News crew at the scene. That restored a vital supply line to besieged rebel strongholds in western Libya.

The AP crew saw two bodies of Libyan troops near the crossing and were told rebels were chasing two dozen Libyan military vehicles on the Libyan side in hopes of securing a supply corridor to the mountain area.

The Nafusa mountain range in western Libya, close to Tunisia, has emerged in recent days as a more troublesome pocket of resistance to Gadhafi forces. The mountain area is home to members of Libya's ethnic Berber community who have complained of systematic discrimination by the Libyan government. Throughout the uprising, there have been reports that rebels dominate towns in the area and fight Gadhafi troops.

Along with the besieged western city of Misrata, the Nafusa range is one of the major centers of opposition to Gadhafi in the western half of Libya, which is mostly controlled by the regime. Rebels have controlled much of eastern Libya since early on in the uprising that began in February.

Thousands of Libyans from the Nafusa mountain communities have fled to Dhuheiba and other Tunisian border towns in recent weeks, as rebels and government forces battled for control of the border crossing.

On Thursday, Libyan troops recaptured the crossing from the rebels, and some of the fighting spilled over into Tunisia, witnesses said. Mongi Slim, a representative of the Tunisian Red Crescent in the area, said at least two people were killed and 20 wounded Thursday, all Libyan troops.

"Given the gravity of what has happened ... the Tunisian authorities have informed the Libyans of their extreme indignation and demand measures to put an immediate stop to these violations," the statement said.

On Friday morning, fighting resumed but the chaotic situation produced different accounts of the border fighting.

On the Misrata front, regime forces fired shells, mortars and rockets into the besieged coastal city.

A doctor at Misrata's main hospital said two people were killed and 17 wounded Friday. One of the dead, a middle-aged man, had been shot in the chest while sitting outside his home in a southern neighborhood, next to Misrata's airport where some of Gadhafi's forces have taken up positions. Last week, rebels chased Gadhafi loyalists from the center of town, but government troops have continued to shell the city from the outskirts.

Misrata, Libya's third-largest city with 300,000 people, has been under siege for two months, and hundreds of people have been killed.