Putting lipstick on the pig

A new bipartisan deficit-reduction plan may sound benign, but it's just a prettied-up version of Paul Ryan's scheme 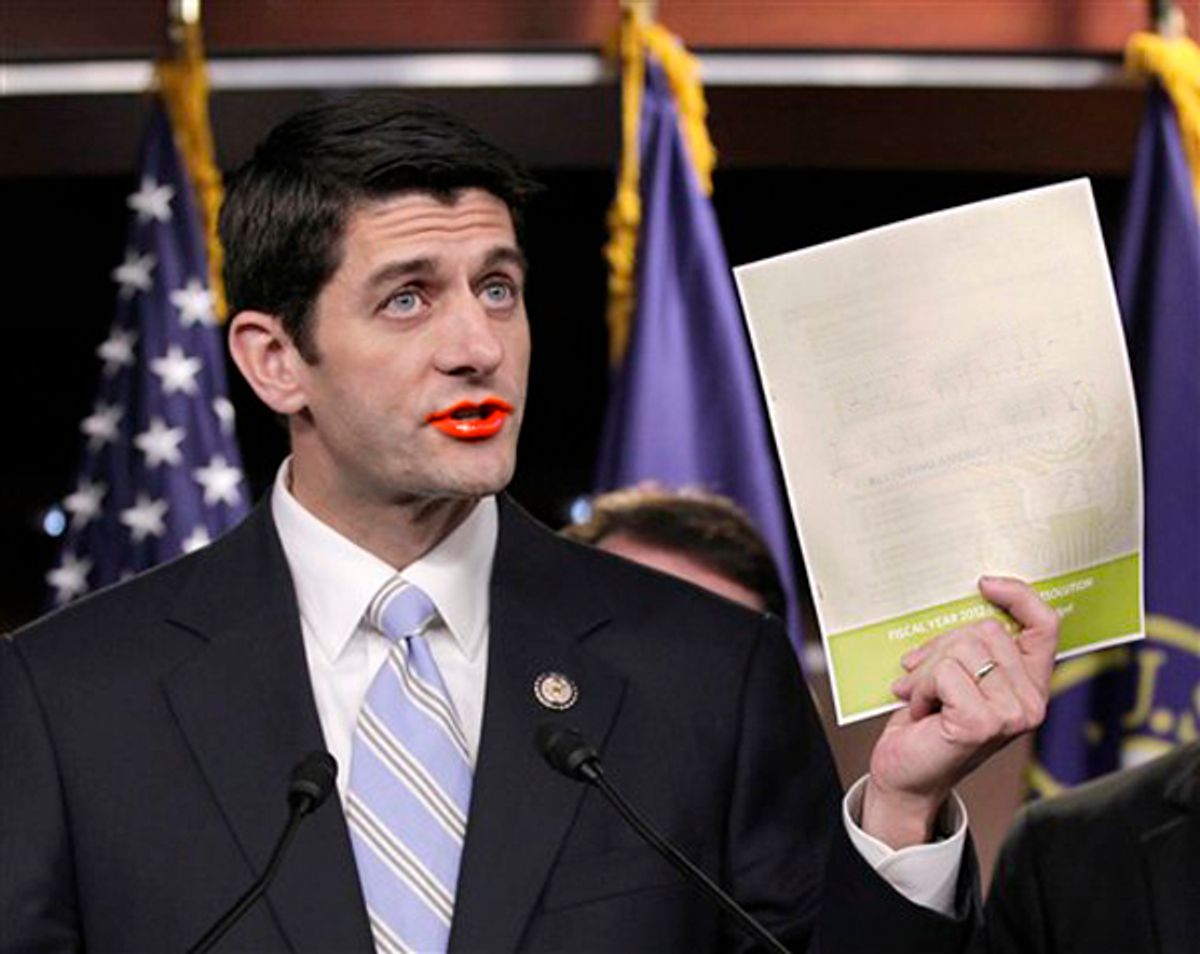 FILE - In this April 5, 2011 file photo, House Budget Committee Chairman Paul Ryan, R-Wis. touts his 2012 federal budget during a news conference on Capitol Hill in Washington. The loudest objections to the GOP Medicare plan are coming from seniors, who swung to Republicans in last year's congressional elections, and many have been complaining at town-hall meetings with their representatives during the current congressional recess. (AP Photo/J. Scott Applewhite, File) (J. Scott Applewhite)
--

If you can’t sell the pig, figure Republicans, put lipstick on it and maybe no one will notice. Add some perfume and maybe you’ll even attract enough Democrats to get it enacted.

A Senate proposal by Republican Bob Corker of Tennessee and Democrat Claire McCaskill of Missouri would save $7.6 trillion over 10 years. How? By capping federal spending at 20.6 percent of gross domestic product within a decade. That’s down from 24.3 percent now.

This is the Ryan plan with lipstick. The Ryan plan puts spending at 20.25 of GDP in 10 years. By comparison, spending under Republican President Ronald Reagan from 1981 to 1989 averaged 22 percent of GDP at a time when no baby boomers had retired.

As a result, Corker-McCaskill would have the same dire result as the Republican plan: According to an analysis by the Washington-based Center on Budget and Policy Priorities, Corker-McCaskill would require "enormous cuts" in Medicare and Medicaid and other programs, and likely force similar policy changes to the entitlement programs that Ryan has proposed.

The reductions would total more than $800 billion in 2022 alone — which would be the equivalent of eliminating the entire Medicare program or the Defense Department. "The Ryan plan is at least quite explicit about the changes that are proposed to be made in specific programs," says Paul Van de Water, a healthcare expert at the Center on Budget and Policy Priorities. The Corker-McCaskill plan "at first blush may sound sort of benign," he adds. "The effects on real people in many cases would be extremely dire."

Watch your wallets. Other Senate Dems are showing interest in the lipsticked pig as well. The Corker-McCaskill proposal is being actively supported by West Virginia’s Joe Manchin. Not surpringly, Joe Lieberman is on board.

Under the Corker-McCaskill plan, if Congress fails to limit spending and keep it under the annual cap, the Office of Management and Budget would have to make evenly distributed cuts throughout the budget. If the automatic cuts took place, they would total about $1.3 trillion in Social Security, $856 billion in Medicare and $547 billion in Medicaid reductions over the first nine years. To avoid the automatic across-the-board cuts, Congress would be under the gun to enact policies for Medicare and Medicaid exactly along the lines of what Ryan has proposed.

The Corker-McCaskill spending cap would also make it impossible for government to boost the economy in recessions.

Don’t be fooled, and don’t let anyone else be. Corker-McCaskill is the same Republican pig.