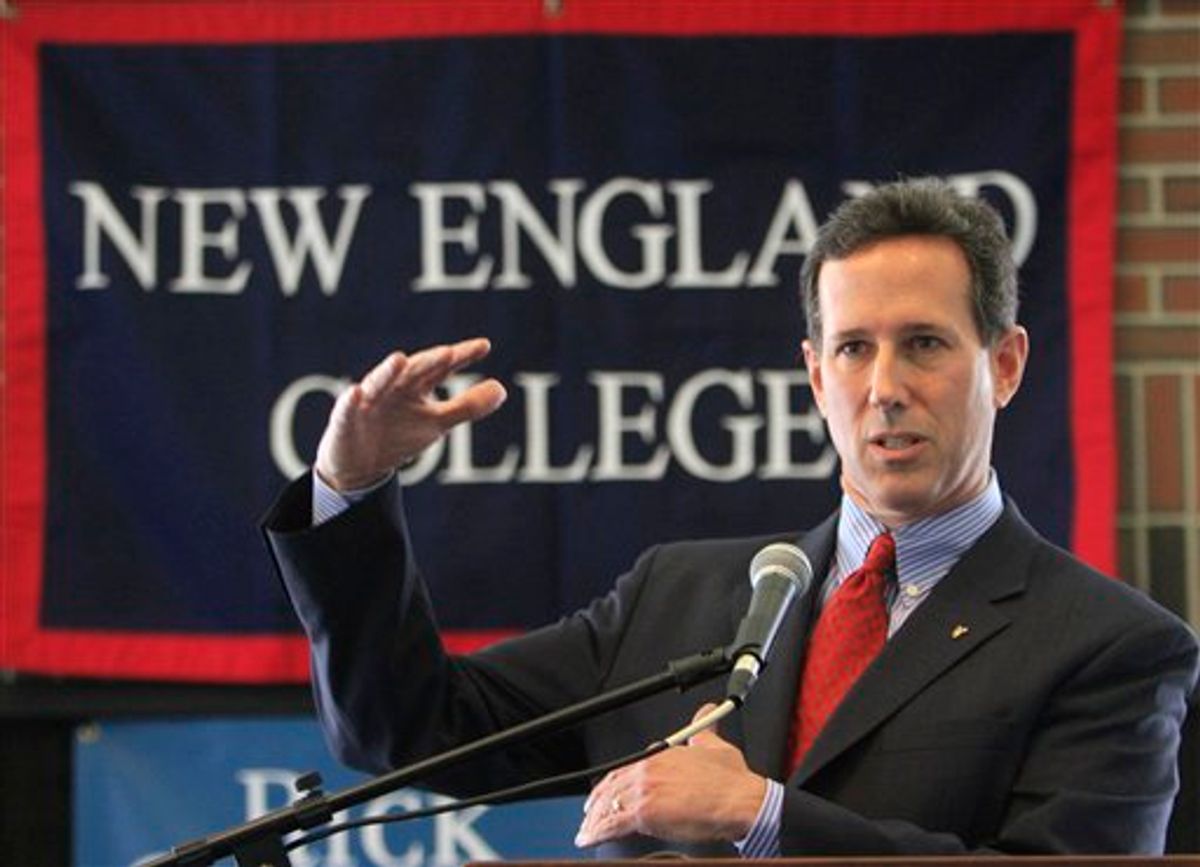 In his big foreign policy speech yesterday, Rick Santorum declared that "sharia and its violent iteration jihadism" pose an "existential threat" to the United States. That's standard fare from Santorum, but a more interesting moment came in the Q&A after the speech, when the former Pennsylvania senator was asked to elaborate.

That's when Santorum did what so many Republican lawmakers are unable to do, which is to offer an explanation of what, in his view, sharia actually means.

The question came from the Daily Caller's Chris Moody:

MOODY: You mentioned that sharia law is an existential threat to the United States. There seems to be some confusion among the general public on how to define sharia law. How do you define it and can you point to some instances within the United States [where] it's taking over?

SANTORUM: If you look at an instance where it's taking over, you have already in the financial sector sharia-compliant finance. [That's] where funds and people who are doing investments are deferring to people put up by groups -- some of which are, let's put it this way, suspect -- as the authority as to what these funds can be invested in in a sharia-compliant way. Investment houses and others, banks, are paying in some cases less-than-reputable people a lot of money to give their blessing for their types of investments. That's a problem. That's a way of ... depending on what they're investing in and who they're paying to give their blessing could be ways in which resources go to places that I'm not too sure are necessarily in our national security interests.

Here's a primer on the Islamic finance Santorum is talking about. It often involves mundane matters like mortgages structured in a way to take interest -- seen by many Muslims as prohibited -- out of the equation.

You also have situations where you you have movements in this country to cordon off and create family courts or other types of laws where Muslims are only held account to religious law as opposed to the civil laws in this country. That has gone on as we know extensively in Europe, but it's coming here and it is actually being advocated for in this country. So there are concrete examples of how that is occurring in America today. I would argue clearly -- I'm not making the argument that America is by any way in the lead on this. The bigger problems and the more notable cases are clearly in places where the higher concentration of Muslims exists and that's clearly in Western Europe and not here.

Santorum did not offer any of those "concrete examples" of some kind of sharia advocacy movement in America. He was then asked again to define sharia:

Sharia is a code, a civil code -- both how the government is to operate [and] things as mundane as personal hygiene, religious practices. It is made up of various texts -- not just the Quran -- that is a code by which Muslims have to live.

Based on previous reporting, that's not a bad definition of sharia. Though Santorum missed the crucial fact that there are many, widely varying forms and interpretations of sharia. And less clear is why Santorum believes sharia -- by his own definition -- poses an existential threat to America.