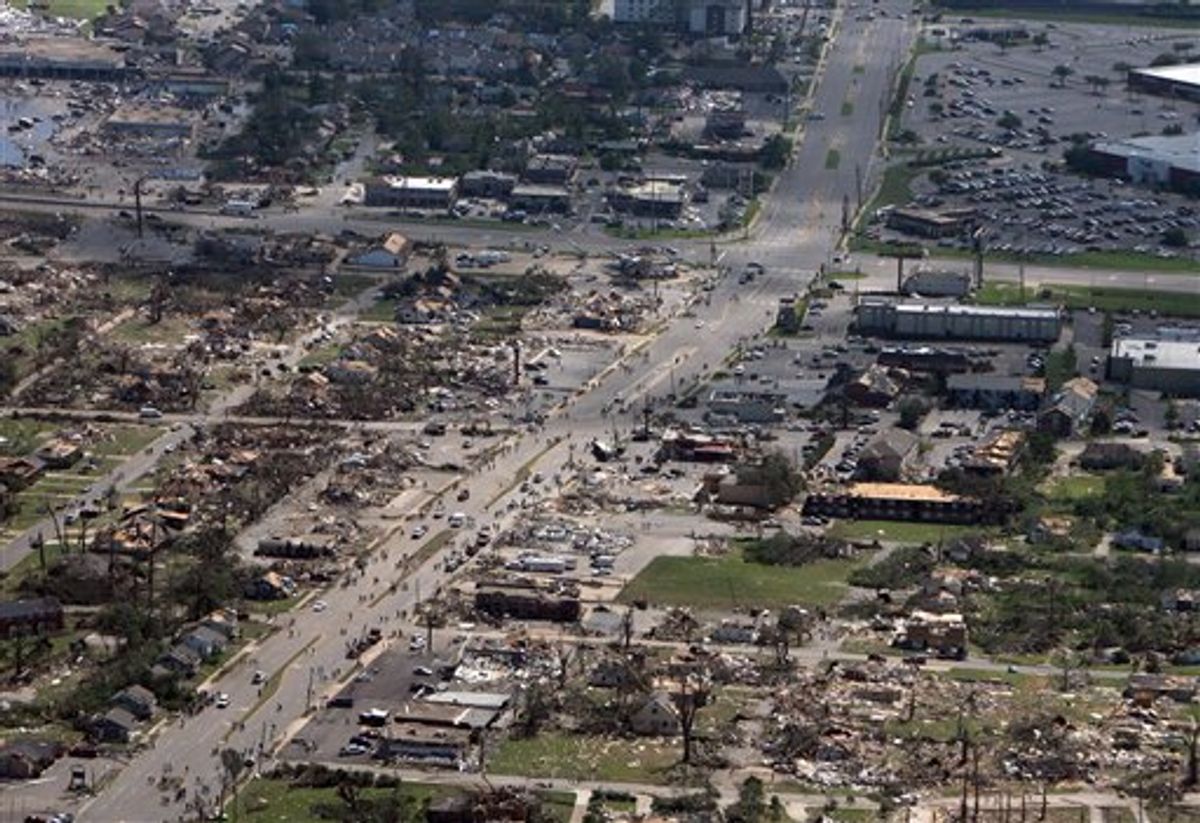 It was bad enough that a tornado obliterated Derrick Keef's house. Worse still was the heartbreaking scavenger hunt for his most priceless possessions strewn across the devastated neighborhood.

His guns were in the ruins of a neighbor's home. A Christmas heirloom shared space in a ditch with broken glass and jagged nails. And his 7-year-old son's bike -- one of the few toys he could salvage -- was pinned under a car a block away.

"I've been going from lot to lot finding stuff," he said as he rifled through debris in Concord, Ala., in search of a family photo album. "It's like CSI."

As crews combed the remains of houses and neighborhoods pulverized by the nation's deadliest tornado outbreak in nearly four decades, survivors were left trying to figure out how to put their lives back together.

At least 297 were killed across six states in Wednesday's outbreak.

President Barack Obama planned a trip to Tuscaloosa on Friday to view storm damage and meet Alabama Gov. Robert Bentley and shattered families. Late Thursday, Obama signed a disaster declaration for the state to provide federal aid to those who seek it.

"He just needs to do something," Chris Travis said about the president as he smoked a cigarette at dawn Friday, looking around an intersection of a Tuscaloosa neighborhood reduced to splintered trees and crumpled homes.

Travis spent the night with his aunt and uncle, whose home may be salvageable despite roof damage and shattered windows. He said it was spooky in the dark, quiet neighborhood with just the birds and squirrels and occasional flashing of police car lights.

"Man, it was scary. I was shaking all night. Smoked a pack of cigarettes back to back," he said.

Those who took shelter as the storms descended trickled back to their homes Thursday, ducking police roadblocks and fallen limbs and power lines to reclaim their belongings.

They struggled with no electricity and little help from stretched-thin law enforcement. And they were frustrated by the near-constant presence of gawkers who drove by in search of a cellphone camera picture -- or worse, a trinket to take home.

"It's just devastation. I've never seen this," said Sen. Richard Shelby during a visit to storm-ravaged Tuscaloosa. "This is the worst tornado devastation I've ever seen."

The storms did the brunt of their damage in Alabama. More than two-thirds of the victims lived there, and large cities bore the scars of half-mile-wide twisters that rumbled through. The high death toll seems surprising in the era of Doppler radar and precise satellite forecasts. But the storms were just too wide and too powerful to avoid a horrifying body count.

As many as a million homes and businesses there were without power, and Bentley said 2,000 National Guard troops had been activated to help. The governors of Mississippi and Georgia also issued emergency declarations for parts of their states.

"We can't control when or where a terrible storm may strike, but we can control how we respond to it," Obama said. "And I want every American who has been affected by this disaster to know that the federal government will do everything we can to help you recover and we will stand with you as you rebuild."

The storms seemed to hone in on populated areas by hugging the interstate highways and obliterating neighborhoods and even entire towns from Tuscaloosa to Bristol, Va.

Concord, a small town outside Birmingham, was so devastated that authorities closed it down to keep out rubberneckers. Randy Guyton's family, which lived in a stately home at the base of a hill in the center of Concord, rushed to the basement garage, piled into a Honda Ridgeline and listened to the roar as the twister devoured the house in seconds. Afterward, they saw outside through the shards of their home and scrambled out.

"The whole house caved in on top of that car," he said. "Other than my boy screaming to the Lord to save us, being in that car is what saved us."

Alabama emergency management officials in a news release early Friday said the state had 210 confirmed deaths. There were 33 deaths in Mississippi, 33 in Tennessee, 15 in Georgia, five in Virginia and one in Kentucky. Hundreds if not thousands of people were injured -- 800 in Tuscaloosa alone.

The loss of life is the greatest from an outbreak of U.S. tornadoes since April 1974, when the weather service said 315 people were killed by a storm that swept across 13 Southern and Midwestern states.

Some of the worst damage was in Tuscaloosa, a city of more than 83,000 that is home to the University of Alabama. The storms destroyed the city's emergency management center, so the school's Bryant-Denny Stadium was turned into a makeshift one. School officials said two students were killed, though they did not say how they died. Finals were canceled and commencement was postponed.

Shaylyndrea Jones, 22, had expected to graduate from the University of Alabama next weekend with a degree in sports science. Instead, she spent Thursday moving out of her ruined apartment, where she rode out the storm huddled in a hallway. But graduation suddenly isn't so important -- she's just thankful she and her roommates survived the night.

"It was the scariest thing I've been through," she said. "We were saying our prayers as it was coming down the street."

Police used bullhorns to tell people not to cross the tape to a neighborhood they were searching. On the other side, people were walking over glass, through pools of water, endless piles of debris and smashed cars. The city imposed a 10 p.m. curfew for Thursday and an 8 p.m. limit for Friday.

Search and rescue teams fanned out to dig through the rubble of devastated communities that bore eerie similarities to the Gulf Coast after Hurricane Katrina in 2005, when town after town lay flattened for nearly 90 miles. Authorities in Concord and elsewhere even painted the same "X" symbols they did in New Orleans to mark which homes they searched and how many survivors were found.

In Phil Campbell, a small town of 1,000 in northwest Alabama where 26 people died, the grocery store, gas stations and medical clinic were destroyed by a tornado that Mayor Jerry Mays estimated was a half-mile wide and traveled some 20 miles.

"We've lost everything. Let's just say it like it is," Mays said. "I'm afraid we might have some suicides because of this."

Officials said at least 13 died in Smithville, Miss., where devastating winds ripped open the police station, post office, city hall and an industrial park with several furniture factories. Pieces of tin were twined high around the legs of a blue water tower, and the Piggly Wiggly grocery store was gutted.

At Smithville Cemetery, even the dead were not spared: Tombstones dating to the 1800s, including some of Civil War soldiers, lay broken on the ground. Brothers Kenny and Paul Long dragged their youngest brother's headstone back to its proper place.

At least eight people were killed in Georgia's Catoosa County, including in Ringgold, where a suspected tornado flattened about a dozen buildings and trapped an unknown number of people.

"It happened so fast I couldn't think at all," said Tom Rose, an Illinois truck driver whose vehicle was blown off the road at I-75 North in Ringgold, near the Tennessee line.

Lisa Rice, owner of S&L Tans in nearby Trenton, survived by climbing into a tanning bed with her two daughters: Stormy, 19, and Sky, 21.

For 30 seconds, wind rushed around the bed and debris flew as wind tore off the roof.

"Then it just stopped. It got real quiet. We waited a few minutes and then opened up the bed and we saw daylight," she said.

In Tuscaloosa, hundreds of people walked in a long, slow procession down the town's main four-lane drag. Some shot pictures and videos of what had been a bustling community. Others came to search the wreckage of their homes.

Seventy-three-year-old Frank Frierson sat on a porch and marveled at the damage.