The mind-numbing stupidity of the Royal Wedding 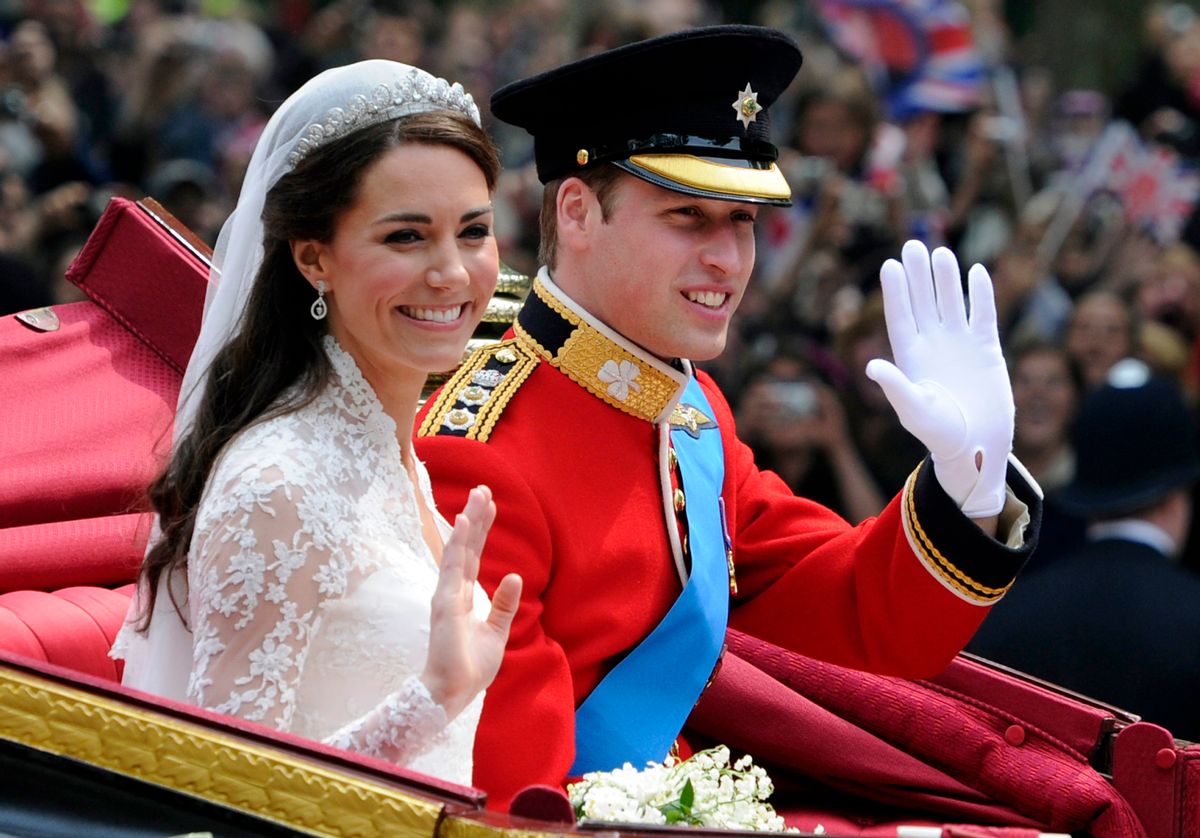 So Prince William and Kate Middleton, now Duchess of Cambridge, are married. They exchanged vows before the Archbishop of Canterbury at Westminster Abbey on the morning of April 29, 2011, with planes roaring overhead and Union Jacks waving and hundreds of thousands of people in the London streets and millions upon millions upon millions of people watching on international television.

"It really is something special," anchor Diane Sawyer said on ABC a few minutes after their first public kiss. Then she added a few minutes later, in a rundown of factoids, "He knows how to line dance!"

The moment capped hours of continuous coverage on every major broadcast network and cable news channel. The news organizations never cut away except for commercials. And they managed to forgo those breaks when it seemed as if something exciting, or "exciting," was about to happen -- such as the newly-hitched royal couple's first kiss, which was so brief that the TV organizations played it back in slow motion, and their second kiss, which presumably was an attempt to improve on the first one.

"I'm a hard-hearted old cynic, but I must admit I did shed a tear," said ABC's Buckingham Palace correspondent Nick Watt, who then stopped just short of taking credit for the chant in the crowd that pushed William and Kate to kiss a second time. "I'd like to think I played a small part in that," Watt said, beaming.

I wish the royal couple the very best. They seem like nice people, truly. Fellow human beings, at the very least. And that's why I hope that when in the unlikely event that they ever read this, that they won't take it personally when I say that the coverage of this whole ceremony and its run-up was revoltingly obsequious and almost entirely devoid of news value, and so altogether bubble-brained that it makes me think that if there is such a thing as karmic payback for wrong priorities, we're due for some major trauma.

As you read this, the big three morning shows -- "Good Morning America," "Today" and "The CBS Morning News" -- are continuing to re-hash, analyze and replay the ceremony on tape while going live to various correspondents and experts in England and elsewhere. The morning shows usually run two hours -- more if an affiliate takes their built-in spillover, but for the sake of argument let's just say they did two hours' worth, and add that to the overnight coverage, which ran four hours in some cases, bringing the total to six. And then let's ask ourselves this question: When's the last time the top guns of the American electronic media covered an event, any event, for six hours straight without any significant interruption, at any hour of the day or night?

It's been so long I can't remember offhand. The countdown to the invasion of Iraq in 2003, maybe....though I was a TV critic then, too, and I don't recall the medium's biggest and most important outlets spending so much time on that one gravely important topic to the exclusion of other news. They certainly don't do that kind of thing for the State of the Union Address, or for the president's meeting with any significant head of state, or for Congressional debates about urgent issues of foreign or domestic policy, even for the funerals of our most significant and beloved (or despised) leaders. American presidential inaugurations don't rate that many nonstop, laser-focused hours. Even the run-up to our own annual homegrown orgies of celebrity worship, the SuperBowl and the Oscars, don't go on for four to six hours on every major broadcast network and cable news outlet simultaneously, to the exclusion of everything else. This sort of thing is mostly just not done -- except when the royal family of the United Kingdom, our onetime estranged national parent, adds a new member via nuptials.

This, apparently, is what it takes to get the media's undivided attention: the marriage between two people who are politically powerless, and who spend their waking lives as designated fetish objects for the United Kingdom's interested citizenry, for Anglophiles the world over, and for the celebrity-fixated media. Our collective Ken and Barbie dolls.

We love looking at their clothes and shoes and cars and security details and following tabloid reports of their social events and private miseries and misadventures. We comb newsstands and Google for photos of the latest royal baby.

"Maybe this is the year of the commoner," Walters said, sometime around 6 AM Eastern, as the Bentleys were pulling up to Westminster Abbey and the wedding party was filing in. The remark capped a list of royals from different countries who had married non-royals, but it seemed like an apt designation any way you parsed it. The royal wedding appeals to romantics, to fans of all things English, to people-watchers and to aficionados of fine clothes and uniforms, yes.

But there's something deeper at play, and it's a bit frightening: a marrow-deep urge to put down the plow, wash the muck from under our fingernails and go worship our designated social superiors; to queue up on the streets or gather in our living rooms in the wee, small hours for a glimpse of a passing motorcade or a flash of a white gown or a white glove or a red uniform tunic, then breathlessly tell others, "I saw them! I saw the prince and duchess! I, a humble serf, saw them and was ennobled by their presence, by the grace of almighty God!"