More members of Assad regime resign in protest against crackdown 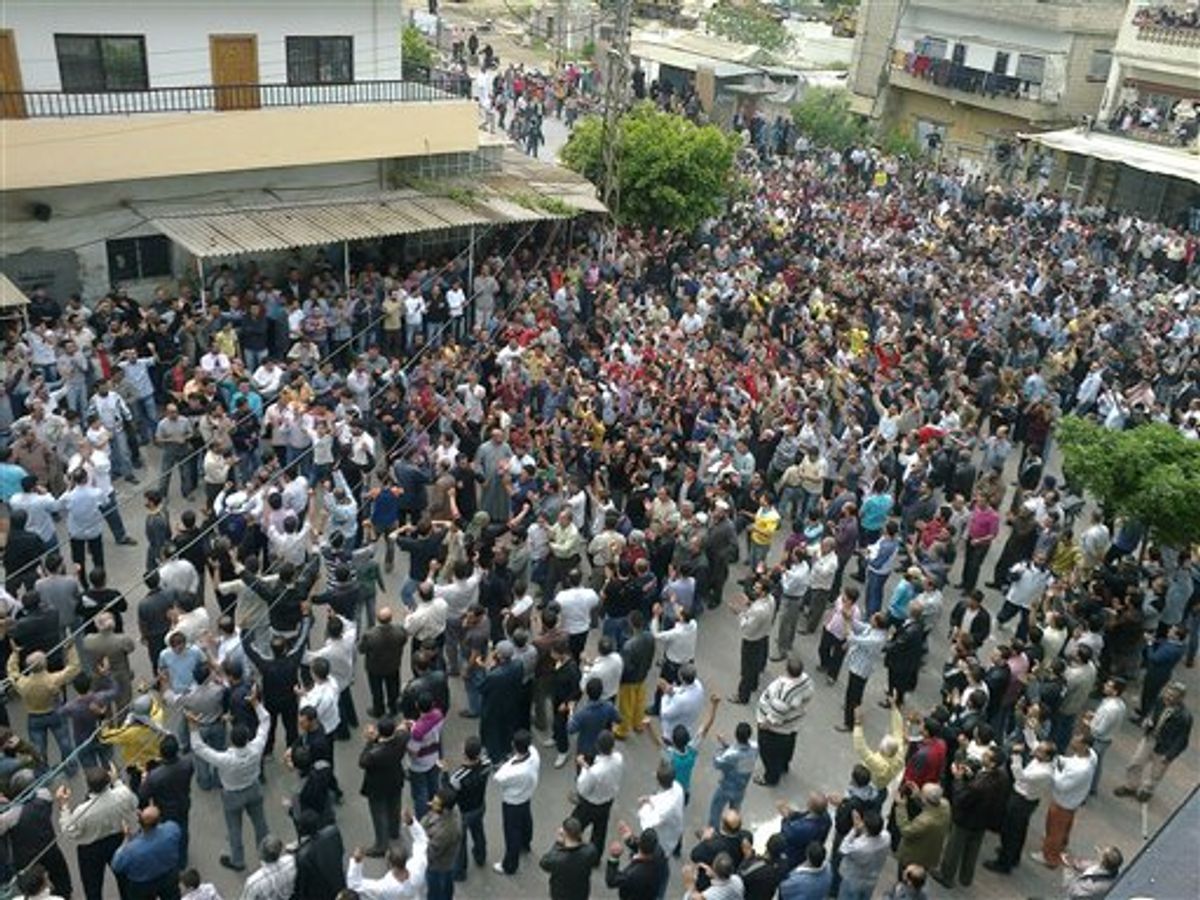 In this citizen journalism image made on a mobile phone and acquired by the AP, Syrians gather after Friday prayers during an anti-government protest in the coastal city of Banias, Syria, Friday, April 29, 2011. Thousands of Syrian protesters chanting "We are not afraid!" were met with bullets and tear gas Friday as security forces opened fire, killing more than 40 people. Many of the dead were villagers who tried to break a military blockade in the city at the heart of the six-week uprising, witnesses said. (AP Photo) (AP)
--

Syrian troops killed four people Saturday while storming a mosque that became a focal point for protesters in the besieged southern city of Daraa, and security forces in Damascus kept dozens of women from marching on parliament to urge President Bashar Assad to end his crackdown on a six-week-old uprising.

More members of Assad's ruling Baath Party resigned in protest as human rights activists said the death toll soared to 535 from government forces firing on demonstrators to try to suppress the popular revolt -- action that has drawn international condemnation and U.S. financial penalties on top figures in his regime.

The military raid on the Omari mosque in Daraa came a day after 65 people were killed -- most of them in the town on Syria's border with Jordan. Friday was the second deadliest day since the uprising began in mid-March in Daraa.

Heaping further punishment on relatives of those killed Friday, they were told to hold small funerals with only family members invited, an activist said, in an apparent attempt to keep the services from turning into anti-Assad protests. Similar orders were given last week, but most people did not follow them, said the activist, Ammar Qurabi, who heads the National Organization for Human Rights in Syria.

Families also were being forced to sign documents saying their loved ones were killed by "armed groups," he added. Syrian state media have blamed the unrest on "armed terrorists" and extremists.

The unrest in Syria -- one of the most repressive and tightly controlled countries in the Middle East -- has repercussions far beyond its borders because of its alliances with militant groups like Lebanon's Hezbollah and with Shiite powerhouse Iran.

The Syrian Revolution 2011 Facebook page, which is run by activists, billed the coming week as "the week to end the siege." The page was referring to the siege on Daraa and the Damascus suburb of Douma that has been closed for days.

The assault on the mosque in the city's Roman-era old town lasted 90 minutes, during which troops fired tank shells and heavy machine guns, said resident Abdullah Abazeid. Three helicopters participated in the operation, dropping paratroopers on top of the mosque itself, he said.

Among the dead was Osama Ahmad, the son of the mosque's imam, Sheik Ahmad Sayasna, according to Abazeid. A woman and her two daughters also were killed when a tank shell hit their home near the mosque, he said.

Earlier this week, security forces shot and killed a man as he walked out of the mosque and used a bullhorn to shout at them: "Enough! Enough! Enough! Stop killing your brothers!"

The mosque had been occupied by residents of Daraa this week after the government first sent in tanks and snipers Monday to crush the demonstrations. The military cut off electricity and telephone service, snipers fired at residents who tried to venture out to pull the dead off the streets, and forces even shot holes in rooftop tanks to drain them of residents' vital supply of water in the bone-dry region.

Sporadic gunfire was heard Saturday, mainly from the central area, another Daraa witness said, adding that for the past week, troops have allowed women to go out to buy bread but stopped them on Saturday.

Some residents have fled to Jordan from Daraa, where the uprising was sparked by the arrest of teenagers who wrote anti-regime graffiti on a wall.

In a new show of defiance, about 50 women carrying banners reading "No to the siege" and "No to killing" demonstrated Saturday in the capital of Damascus and tried to reach the parliament building, activists said. Plainclothes security forces stopped them long before they reached the legislature's offices and detained 11 women and put them in a bus that drove away, the activists added.

Security agents also detained Hassan Abdul-Azim, one of Syria's most prominent opposition figures who heads the outlawed Arab Socialist Democratic Union party, according to Qurabi, the human rights leader. The agents walked into the office of Abdul-Azim, who is in his 70s, and detained him, he said.

In another development in the Daraa region, 138 Baath Party members resigned to protest the crackdown. Lists of those who resigned, with their party rank, identity card numbers and signatures, were sent to the AP by activists.

It was not possible to independently verify the authenticity of the lists of the low-ranking members. Earlier this week, another 200 mostly low-level Baath members in the same province quit in protest.

In Damascus, the Information Ministry took local journalists on a tour in the old part of the city to show them that life is going on as usual. As they walked near the Ummayad Mosque, about 100 government supporters demonstrated carrying Assad's pictures.

A Spanish student at Damascus University, who identified herself as Marcy, 20, said while touring the nearby busy Hamidiyeh market that there is "some fear in the country." She said some of her friends have left Syria "because they were afraid. I hope calm will be restored soon in the country."

Of the 65 people reported killed Friday, 36 of the deaths were in Daraa province, 27 in the central Homs region, one in Latakia and another in the Damascus countryside, said Rami Abdul-Rahman, head of the Syrian Observatory for Human Rights.

Large demonstrations were reported Friday in Damascus, the central city of Homs, the coastal cities of Banias and Latakia, the northern cities of Raqqa and Hama, and the northeastern town of Qamishli near the Turkish border.

Qurabi said about 100 people from the Homs region are missing -- possibly killed, detained or wounded.

In the coastal city of Banias, a resident said armed forces had withdrawn from the city center after taking up positions there earlier in the month.

The witnesses' accounts could not be independently verified. All spoke on condition of anonymity for fear of government reprisal. Syria has banned nearly all foreign media and restricted access to trouble spots, making it almost impossible to confirm the dramatic events shaking one of the most authoritarian regimes in the Arab world.