How to make the perfect recession martini

It may not sound like a budget drink, but in this economy, we all need a way to unwind 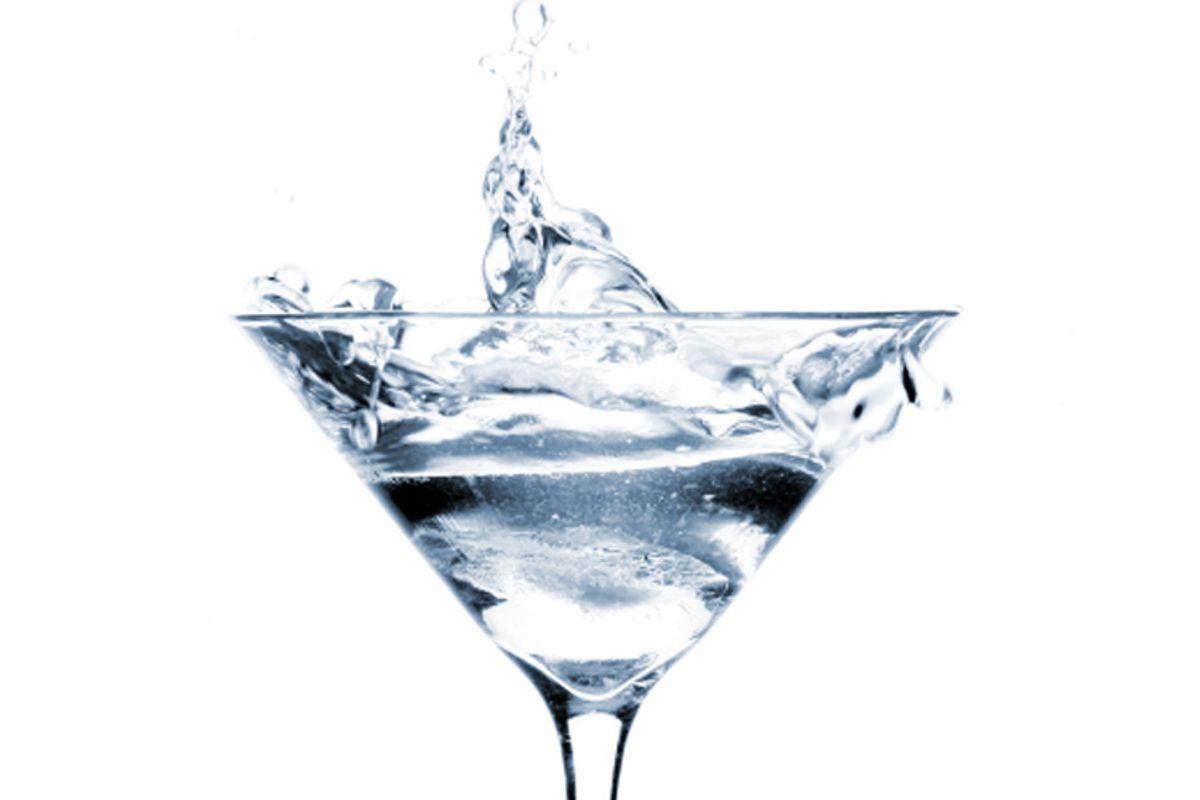 The martini has no legitimate place in a series about budget living, but after a winter of huddling by a smoldering fire eating legumes and one-pot meals, I feel in the mood for something decadent. And a stiff drink. And I've never been above scavenging in other people's liquor cabinets.

I'm visiting my former urban home (Seattle) for a brief vacation from the wilds of rural Oregon, so it seems appropriate to celebrate my wayward past and my hillbilly future with a drink that incorporates elements of both -- fine gin with a foraged garnish.

The liquor cabinet I'll be scavenging belongs to Chef Robin Leventhal, best known from her appearance on season six of "Top Chef." I know from past experience that, like the rest of her artistically cluttered house, it brims with interesting items. Today is no exception.

"Smell this," Robin commands, handing me an attractive bottle of Ebb and Flow gin. Ebb and Flow is from a new Ballard distillery, Sound Spirits. Thanks to a recent change in Washington's liquor laws, Sound Spirits is the first distillery to open in Seattle since prohibition, and it smells like they might be on to something. The gin's aroma has a tinge of coriander and an echo of absinthe. Robin thinks it'll be the perfect complement to her latest prize -- pickled ramps and wild fiddleheads from nearby Enumclaw.

"I'm thinking martini with ramp brine in place of vermouth," she says. "What do you think?" I think yes.

Robin is an old hand at foraging. "Eating outdoors has always been a natural thing for me. I was a fly fisherwoman for years. I think growing up in the mountains influenced me. When I was 8 years old, I knew every wildflower that existed in Idaho and Colorado, including wild onions." She hands me a pristine glass jar of pickled ramps.

"I've never had ramps before," I say, removing the glass lid and fishing a green and white stem from the clear brine. Because ramps look like scallions, the flavor is a surprise. Chill and pleasingly crisp, the ramp bursts with garlicky sweetness.

"When I was in Vermont teaching at New England Culinary Institute, we took our students out foraging for ramps. That was the first time I ever had one," Robin explains as she pours Ebb and Flow gin into a martini shaker. "I like them grilled. Throw them in boiling water until the leaves turn bright green. I put the white bulbs in first for 30 seconds, let the greens go in for 10, and then dunk them in ice water. Throw them on a hot grill with a little oil and salt, and they're so delicious!" Robin says with genuine enthusiasm.

Fans of "Top Chef" may remember that Robin talks as fast as she moves -- she's got a riff for every topic. "Part of the fun of scavenging or foraging is taking people with you so it's a group activity," she says, straining the gin. "Then you come back together and fix a meal. It's about community. It's good exercise. For us city folk, it's a real nice treat to break from our concrete world and get our shoes dirty."

What fans of "Top Chef" may not anticipate, however, is Robin's warmth and bounce -- the show's producers cast her as her something of a virago, but nothing of that comes across in person. She's intense, yes. But it's the enthusiastic intensity of a culinary aficionado who doesn't let her expertise impede her curiosity. Also, she's the least condescending chef I've ever met.

"What do you think? One teaspoon of brine or two?" she asks.

"One, for starters?" I venture, mentally preparing to sample Robin's pickled fiddleheads, which are coiled like tiny green vipers in a glass specimen jar. After my last experience with ferns, I am prepared for bitter. Instead, Robin's fiddleheads are sweet and salty, with a woodsy undertone. When I look closely, I notice the scrolls are entirely devoid of brown chaff, which gives credence to the reader who pointed out that my own problem with fiddleheads was probably due to my sloppy cleaning job. I eat another one.

It should come as no surprise that the ramps and fiddleheads are delectable; Robin has been on a pickling kick lately as she prepares the menu and inventory for Stopsky's on Mercer Island, where she is head chef. The restaurant is due to open in May and is billed as Jewish with a northwest twist, which sounds perfect for Robin.

"I've been perfecting my pickled red cabbage and my sauerkraut," she says, adding sternly, "which are two different things, you know." Then in true form, she waxes enthusiastic on the subject: "I love pickling, or capturing the essence of a vegetable in its prime. Come the middle of winter and you're craving a bite of spring, you can open up a jar of pickled ramps and fiddleheads and it brings spring right back."

The ramps and fiddleheads in question find a nice home in silver-rimmed martini glasses full of chilled gin. We make one martini with Bombay Sapphire and one with Ebb and Flow. At first the gin overpowers in both drinks, so Robin adds an extra teaspoon of ramp brine and voila! The finished Sapphire martini is mellower and sweeter than the Ebb and Flow martini, which has an intense herbal bouquet that compliments its foraged ingredients. The Sapphire martini has its allure, but both of our blind-taste volunteers (whom we rope in from the neighboring house) prefer the Ebb and Flow version.

"Well, you said something about dried rose hips, and I did bring these licorice ferns from home," I say, waving a moist Ziploc bag full of ferns. (I know there's nothing about the phrase "moist Ziploc bag full of ferns" that sounds alluring to your average person, but to any longtime forager, it's a different story.) Why am I tempting Robin into another drink-mixing session when I've already gleaned three recipes? It's not just that I want another delicious free cocktail -- really.

Best served on salads, with fish or, as we prefer, in a martini!