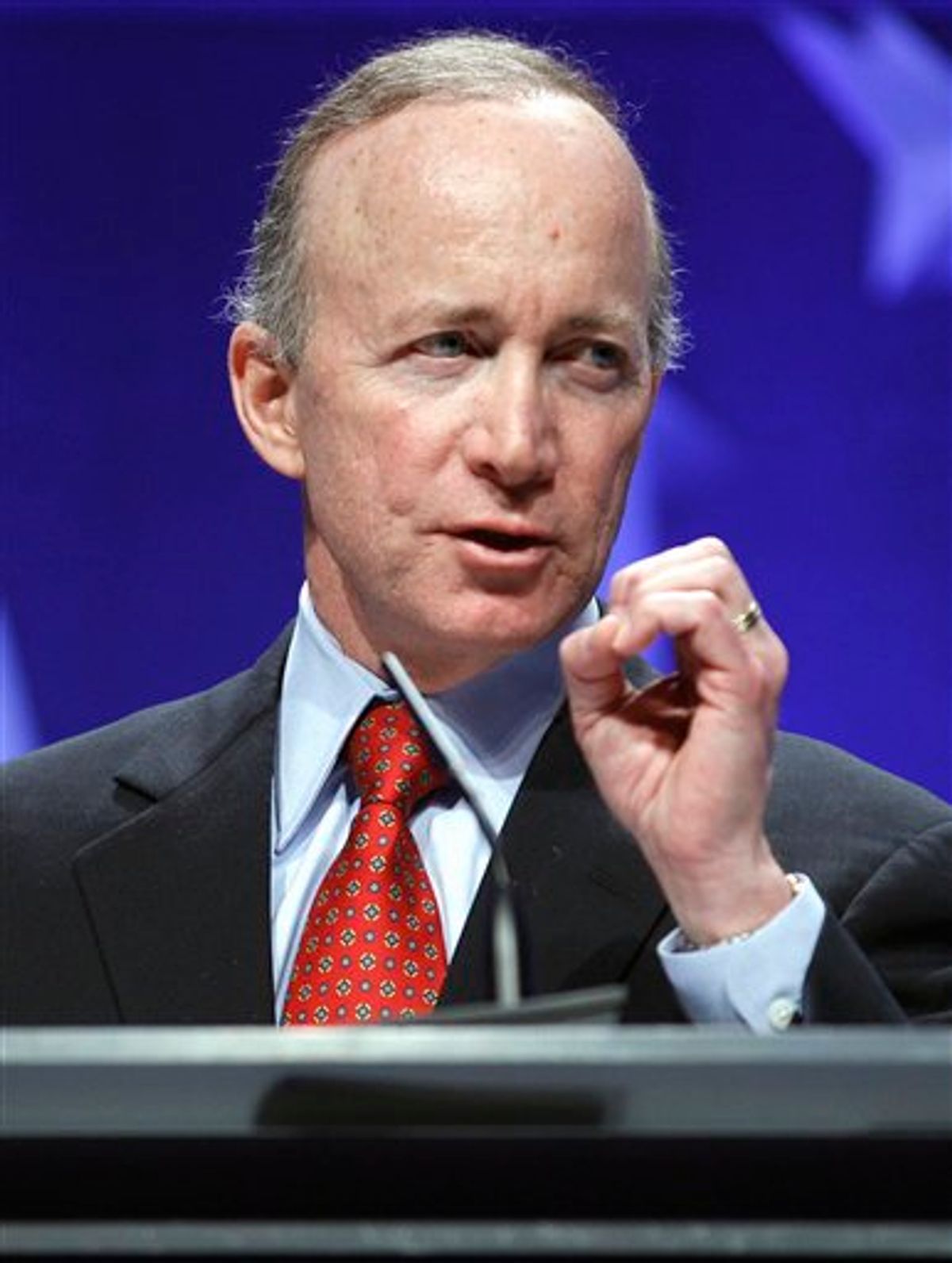 FILE - In this Feb. 11, 2011 file photo, Gov Mitch Daniels speaks at the Conservative Political Action Conference in Washington. Indiana is posed to create the nations broadest private school voucher system and become the first state to cut off all government funding for Planned Parenthood, just as Gov. Daniels nears an announcement on whether he will make a 2012 presidential run. (AP Photo/Jose Luis Magana, File) (AP)
--

Republican Gov. Mitch Daniels said Friday he will sign restrictive abortion legislation, making Indiana the first state to cut off all government funding for Planned Parenthood and boosting Daniels' credentials among social conservatives as he considers whether to run for president.

Daniels said he supported the abortion restrictions from the outset and that the provision added to defund abortion providers did not change his mind. He said women's health, family planning and other services will remain available.

"The principle involved commands the support of an overwhelming majority of Hoosiers," Daniels said in a statement announcing his intention to sign the bill when it arrives on his desk in about a week.

Planned Parenthood of Indiana said in a statement it would file an injunction to "try to halt this alarming erosion of public health policy in our state."

"We will now suffer the consequences of lawmakers who have no regard for fact-based decision making and sound public health policy," she said.

The bill puts Indiana at risk of losing $4 million a year in federal family planning grants likely to be cut off because of the legislation. Daniels, known as a fiscal hawk, did not address the loss in his statement.

The bill wasn't part of Daniels' agenda and he did not publicly advocate for the Planned Parenthood provision, but signing it might help his chances of winning the GOP nomination. Daniels opposes abortion rights, but his call for a Republican "truce" on social issues has drawn the ire of the social conservatives.

"No one will talk about the truce," Turner said. "People in the conservative community care about action, and he's clearly the most pro-life governor in America with a signature on that bill."

State Rep. Linda Lawson, a Democrat from Hammond who opposes the bill, said the legislation wouldn't win Daniels any friends among independents and women.

"It might be a maneuver, but I don't know if it's in his best interest," Lawson said.

While some at the Statehouse thought Daniels' decision was a sign he'll be running for president, House Speaker Brian Bosma, R-Indianapolis, said people shouldn't read too much into it. He said he thought the governor would likely sign the bill regardless of his future plans.

Planned Parenthood says the bill could leave as many as 22,000 patients without access to Pap tests, birth control and treatment for sexually transmitted diseases.

The governor's office said the law will affect 7 entities in Indiana that have a total of 34 locations in 21 counties.

"We will take any actions necessary to ensure that vital medical care is, if anything, more widely available than before," Daniels said.

"Any organization affected by this provision can resume receiving taxpayer dollars immediately by ceasing or separating its operations that perform abortions."

Planned Parenthood of Indiana had urged Daniels to veto the bill and started a series of statewide rallies against it Friday.

Daniels, 62, has said he will decide on a run for president after the Indiana Legislature adjourns, which is expected Friday. He's also said he will not have a decision this weekend.