Killing of bin Laden: What are the consequences?

Beyond the emotional satisfaction, what benefits does this achieve? 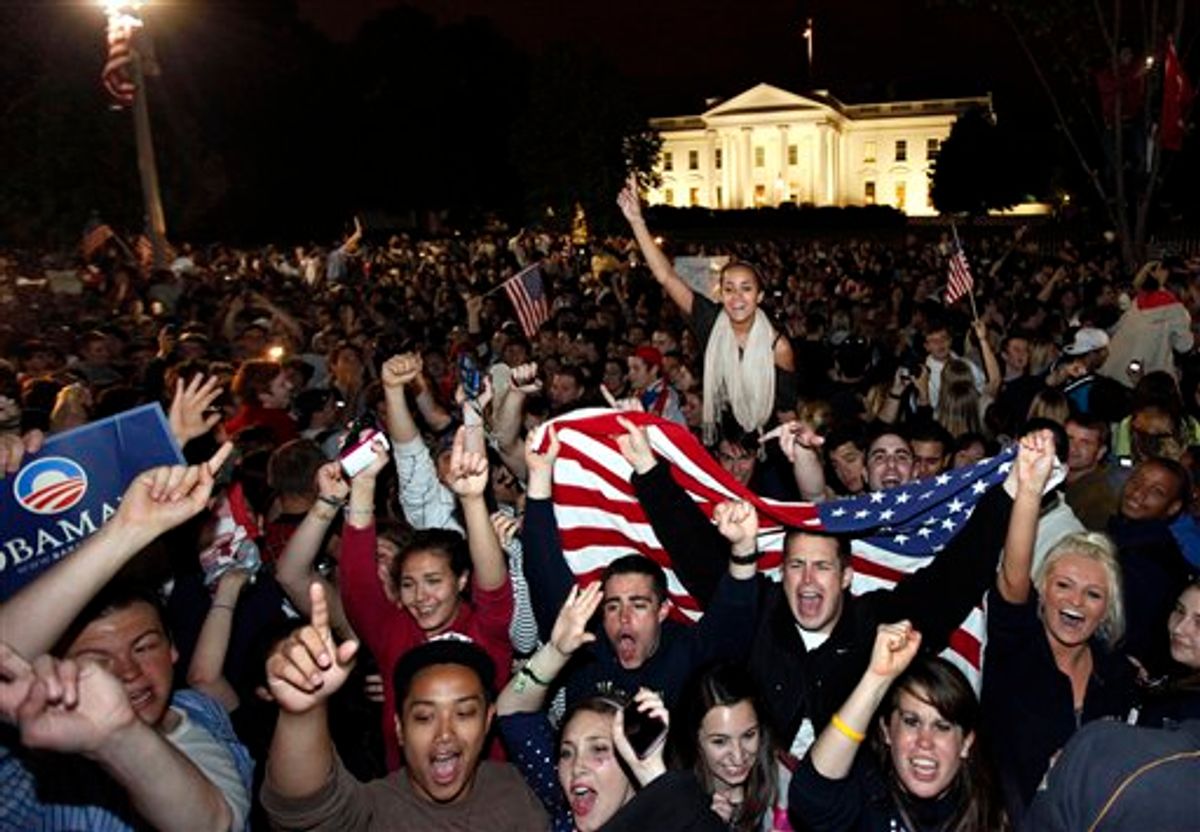 The killing of Osama bin Laden is one of those events which, especially in the immediate aftermath, is not susceptible to reasoned discussion. It's already a Litmus Test event: all Decent People -- by definition -- express unadulterated ecstacy at his death, and all Good Americans chant "USA! USA!" in a celebration of this proof of our national greatness and Goodness (and that of our President). Nothing that deviates from that emotional script will be heard, other than by those on the lookout for heretics to hold up and punish. Prematurely interrupting a national emotional consensus with unwanted rational truths accomplishes nothing but harming the heretic (ask Bill Maher about how that works).

I'd have strongly preferred that Osama bin Laden be captured rather than killed so that he could be tried for his crimes and punished in accordance with due process (and to obtain presumably ample intelligence). But if he in fact used force to resist capture, then the U.S. military was entitled to use force against him, the way American police routinely do against suspects who use violence to resist capture. But those are legalities and they will be ignored even more so than usual. The 9/11 attack was a heinous and wanton slaughter of thousands of innocent civilians, and it's understandable that people are reacting with glee over the death of the person responsible for it. I personally don't derive joy or an impulse to chant boastfully at the news that someone just got two bullets put in their skull -- no matter who that someone is -- but that reaction is inevitable: it's the classic case of raucously cheering in a movie theater when the dastardly villain finally gets his due.

But beyond the emotional fulfillment that comes from vengeance and retributive justice, there are two points worth considering. The first is the question of what, if anything, is going to change as a result of the two bullets in Osama bin Laden's head? Are we going to fight fewer wars or end the ones we've started? Are we going to see a restoration of some of the civil liberties which have been eroded at the altar of this scary Villain Mastermind? Is the War on Terror over? Are we Safer now?

Those are rhetorical questions. None of those things will happen. If anything, I can much more easily envision the reverse. Whenever America uses violence in a way that makes its citizens cheer, beam with nationalistic pride, and rally around their leader, more violence is typically guaranteed. Futile decade-long wars in Iraq and Afghanistan may temporarily dampen the nationalistic enthusiasm for war, but two shots to the head of Osama bin Laden -- and the We are Great and Good proclamations it engenders -- can easily rejuvenate that war love. One can already detect the stench of that in how Pakistan is being talked about: did they harbor bin Laden as it seems and, if so, what price should they pay? We're feeling good and strong about ourselves again -- and righteous -- and that's often the fertile ground for more, not less, aggression.

And then there's the notion that America has once again proved its greatness and preeminence by killing bin Laden. Americans are marching in the street celebrating with a sense of national pride. When is the last time that happened? It seems telling that hunting someone down and killing them is one of the few things that still produce these feelings of nationalistic unity. I got on an airplane last night before the news of bin Laden's killing was known and had actually intended to make this point with regard to our killing of Gadaffi's son in Libya -- a mere 25 years after President Reagan bombed Libya and killed Gadaffi's infant daughter. That is something the U.S. has always done well and is one of the few things it still does well. This is how President Obama put it in last night's announcement:

The cause of securing our country is not complete. But tonight, we are once again reminded that America can do whatever we set our mind to. That is the story of our history, whether it’s the pursuit of prosperity for our people, or the struggle for equality for all our citizens; our commitment to stand up for our values abroad, and our sacrifices to make the world a safer place.

Does hunting down Osama bin Laden and putting bullets in his skull really "remind us that we can do whatever we set our mind to"? Is that really "the story of our history"? That seems to set the bar rather low in terms of national achievement and character.

UPDATE: Recall what happened in 2003 when Howard Dean interrupted the national celebratory ritual triggered by Saddam Hussein's capture when he suggested that that event would likely not make us safer.  He was demonized by political leaders in both parties, with Joe Lieberman finally equating him with Saddam by accusing Dean of being in a "spider hole of denial."  That will be the same demonizing reaction targeted at anyone who deviates from today's ritualistic script.

Meanwhile, here is the reaction to today's events from Emily Miller of The Washington Times Editorial Page:

Those primitive, bloodthirsty Muslim fanatics sure do love to glorify death and violence.