"USA! USA!" is the wrong response

Bin Laden's death is a great relief, but by cheering it we're mimicking our worst enemies 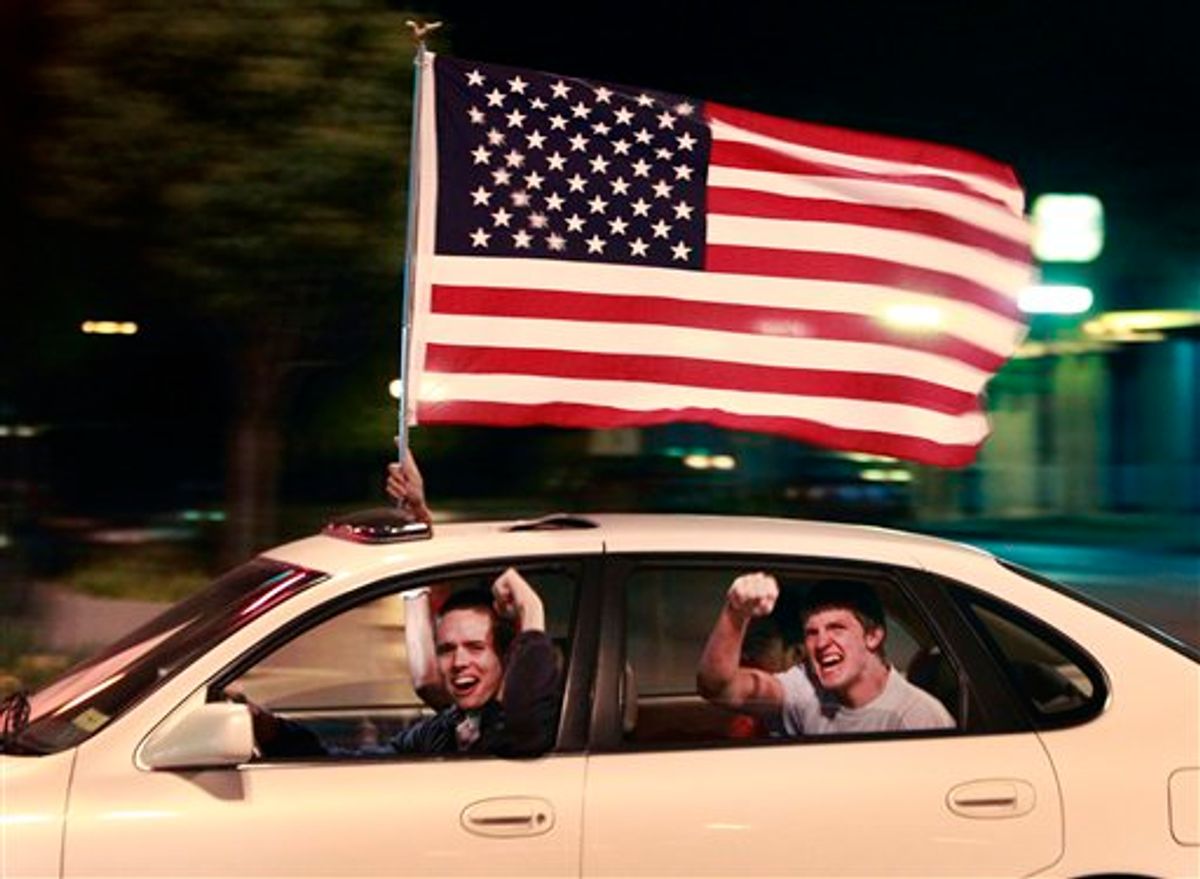 A driver and passengers celebrate the death of Osama bin Laden in the streets of Lawrence, Kan., Sunday, May 1, 2011. President Barack Obama announced Sunday night, May 1, 2011, that Osama bin Laden was killed in an operation led by the United States.(AP Photo/Orlin Wagner) (AP)
--

There is ample reason to feel relief that Osama bin Laden is no longer a threat to the world, and I say that not just because I was among the many congressional staffers told to flee the U.S. Capitol on 9/11. I say that because he was clearly an evil person who celebrated violence against all whom he deemed "enemies" -- and the world needs less of such zealotry, not more.

However, somber relief was not the dominant emotion presented to America when bin Laden’s death was announced. Instead, the Washington press corps -- helped by a wild-eyed throng outside the White House -- insisted that unbridled euphoria is the appropriate response. And in this we see bin Laden’s more enduring victory -- a victory that will unfortunately last far beyond his passing.

For decades, we have held in contempt those who actively celebrate death. When we’ve seen video footage of foreigners cheering terrorist attacks against America, we have ignored their insistence that they are celebrating merely because we have occupied their nations and killed their people. Instead, we have been rightly disgusted -- not only because they are lauding the death of our innocents, but because, more fundamentally, they are celebrating death itself. That latter part had been anathema to a nation built on the presumption that life is an "unalienable right."

But in the years since 9/11, we have begun vaguely mimicking those we say we despise, sometimes celebrating bloodshed against those we see as Bad Guys just as vigorously as our enemies celebrate bloodshed against innocent Americans they (wrongly) deem as Bad Guys. Indeed, an America that once carefully refrained from flaunting gruesome pictures of our victims for fear of engaging in ugly death euphoria now ogles pictures of Uday and Qusay’s corpses, rejoices over images of Saddam Hussein’s hanging and throws a party at news that bin Laden was shot in the head.

This is bin Laden’s lamentable victory: He has changed America’s psyche from one that saw violence as a regrettable-if-sometimes-necessary act into one that finds orgasmic euphoria in news of bloodshed. In other words, he’s helped drag us down into his sick nihilism by making us like too many other bellicose societies in history -- the ones that aggressively cheer on killing, as long as it is the Bad Guy that is being killed.

Again, this isn’t in any way to equate Americans who cheer on bin Laden’s death with, say, those who cheered after 9/11. Bin Laden was a mass murderer who had punishment coming to him, while the 9/11 victims were innocent civilians whose deaths are an unspeakable tragedy. Likewise, this isn’t to say that we should feel nothing at bin Laden’s neutralization, or that the announcement last night isn't cause for any positive feeling at all -- it most certainly is.

When we lose the sadness part -- when all we do is happily scream "USA! USA! USA!” at news of yet more killing in a now unending back-and-forth war -- it’s a sign we may be inadvertently letting the monsters win.