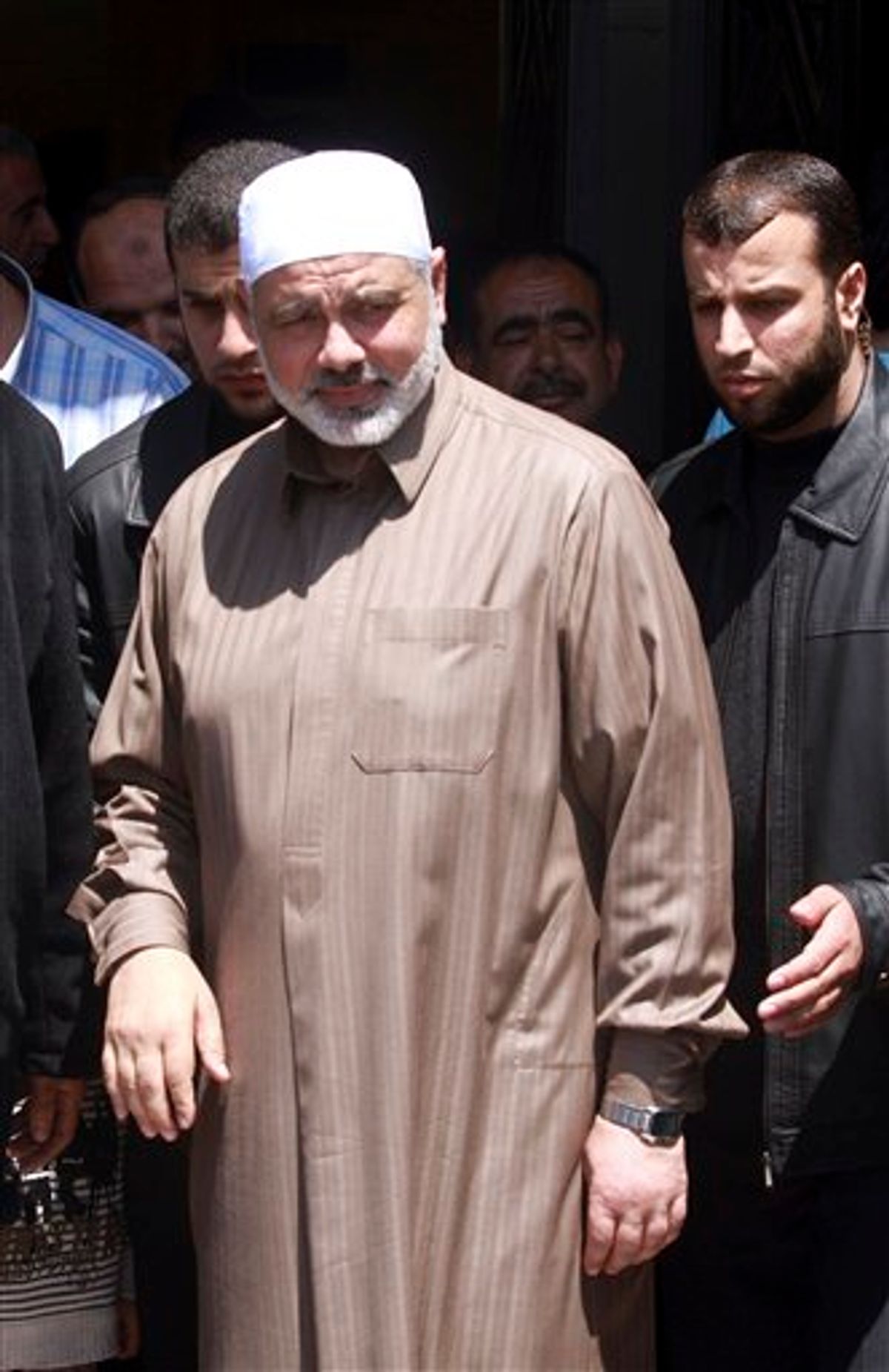 Gaza's Hamas Prime Minister Ismail Haniyeh leaves a mosque after Friday prayers in Gaza City, Friday, April 29, 2011. Officials from the rival Fatah and Hamas movements said Wednesday, they have reached an initial agreement on ending a four-year-old rift that has left them divided between rival governments in the West Bank and Gaza Strip.(AP Photo/Hatem Moussa) (AP)
--

The newly reconciled Palestinians factions, Hamas and the Palestinian Authority, differed sharply in their reaction to the news of Osama bin Laden's death.

Ismail Haniyeh, head of the Hamas administration in the Gaza Strip, condemned the killing, calling it a "continuation of the American oppression and shedding of blood of Muslims and Arabs." The Hamas leader emphasized his group's differences with al-Qaida, but called bin Laden an "Arabic warrior."

Meanwhile, a spokesman for the P.A. told reporters, "Getting rid of bin Laden is good for the cause of peace worldwide but what counts is to overcome the discourse and the methods -- the violent methods -- that were created and encouraged by bin Laden and others in the world."

What this split reaction will mean for the future of Palestinian unity is yet to be seen, but highlights the stark differences between the Islamist Hamas and secular Fatah factions.

Reuters noted Monday morning that Haniyeh may have had a pragmatic impetus for his response: "Political analysts in the Gaza Strip said Haniyeh was attempting through his remarks to cool tensions in the territory with al Qaeda-inspired Salafi groups. They consider Hamas too moderate and waged gun battles recently with its forces."

Nonetheless, international acceptance of a Palestinian coalition government will no doubt be further strained following Hamas’s condemnation of the al-Qaida leader’s demise.

Reactions across the Middle East have been largely cautious, highlighting the fact that bin Laden remains a hero figure to many groups across widespread regions. Remarks from Arab leaders underscored these ongoing tensions with carefully worded responses.

"There were no scenes of jubilation in the streets, though the death obviously dominated news broadcasts in the region," CNN reported.

In Pakistan, where the raid on bin Laden took place, the official line is positive but subdued, according to ABC News:

"Osama bin Laden's death illustrates the resolve of the international community, including Pakistan, to fight and eliminate terrorism," the Pakistani foreign ministry said in a statement.

Former Pakistan President General Pervez Musharraf praised bin Laden’s death as a "victory for all the peace loving people of the world," but he condemned the U.S. raid:

"There is another aspect... which is Pakistan's sovereignty. No one has the right to come into Pakistan and launch an attack. And this will not be accepted by the people of Pakistan," he told Headlines Today, a leading Indian news channel.

A Pew Research Center survey released may help explain the mixture of responses across Arab nations:

In the months leading up to Osama bin Laden’s death, a survey of Muslim publics around the world found little support for the al Qaeda leader. Among the six predominantly Muslim nations recently surveyed by the Pew Research Center’s Global Attitudes Project, bin Laden received his highest level of support among Muslims in the Palestinian territories – although even there only 34% said they had confidence in the terrorist leader to do the right thing in world affairs.

Furthermore, the widespread unpopularity of U.S. presence in the Middle East adds another layer of complexity tempering responses from the Arab world today.