A decade ago, the CMA tried to bring out patriotism in its fans, but what really changed everything was Sept. 11 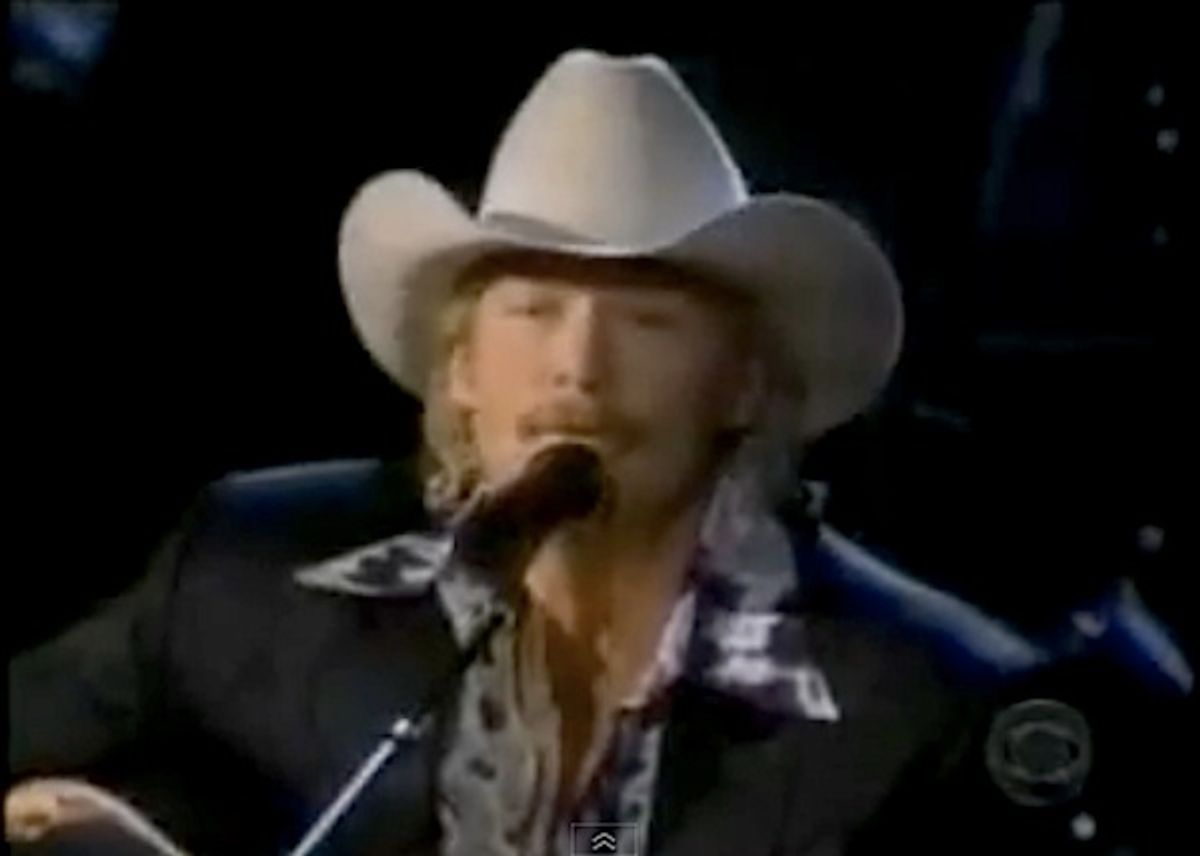 Alan Jackson gains credibility for his song "Where were you?"
--

Country music has enjoyed a resurgence in the past decade, and while it may be a little derivative to give all the credit to the surge of patriotism that Americans felt post-9/11, consider this: In May 2001, the Country Music Association took heat from its fans when it officially changed its slogan to "Admit it. You love us."

The message was clear to anyone reading between the lines. If you liked country music back in the early part of the aughts, you hid that love, like a high-school girl who only listens to musicals. (Hey, I can relate.) The CMA even issued a statement, saying the quote was "a challenge to everyone who has ever connected with a country song or a specific artist but may not feel a current connection to the format as a whole or is reluctant to share their enjoyment of the music with others." Yikes.

The attempt was part of a campaign by the CMA to "brand" its music, something that had never been tried before "as far as we can tell," according to the CMA executive director Ed Benso. It wasn't that country music had taken a nose dive, but the '90s had been such a booming time for the genre that producers and music executives were loath to take a hit. Garth Brooks, Lyle Lovett and Billy Ray Cyrus had allowed the brand to go international and platinum in the space of a few short years, but it was still a struggle to find the right marketing techniques to sell Europe on the Country Music Television channel.

And then, Sept. 11. If country music benefited as a result of the twin towers falling, then it was a bittersweet victory. CMT garnered its highest ratings in October of 2001 after holding the "Freedom Concert," which raised $5 million for the Salvation Army Disaster Relief Fund. Alan Jackson achieved a moment of fleeting worldwide fame when his single "Where Were You (When the World Stopped Turning)" became a symbol both of America's pain and cynical attempts to cash in on the hurt. (See "South Park's" takedown of Jackson in the episode "A Ladder to Heaven.") The same went for Toby Keith's "Courtesy of the Red, White & Blue (The Angry American)," which the country star had to be coaxed into playing after an initial bout of discomfort with the material.

But as a USA Today article in 2002 aptly pointed out, this discomfort did not affect the listeners of the music:

"... if country songwriters have been reluctant to talk, country fans have been more than willing to listen ... both Jackson's and Keith's records topped the Billboard country singles chart, Jackson's for five weeks. Several similar records, ranging from generally patriotic numbers to songs written in direct response to the attacks, have made at least nominal showings."

Not all performers were shy about tackling the tough issues post-September either. Steve Earle put out his response in the album "Jerusalem" in 2002, which included the song "John Walker's Blues," written "from the vantage point of 'American Taliban' John Walker Lindh." The song was met with criticism from both sides, with some calling it "unpatriotic" and others claiming that it was too controversial a subject. Some performers were accused of cashing in on the attacks, like Bruce Springsteen, who released "The Rising."

But the legacy of country music is bigger than the individual. Once the dust has settled, what will people see when they look back at country music in the aughts? Taylor Swift, the CMT Awards, the CMA Awards (completely different), Carrie Underwood, Lady Antebellum, Brad Paisley, Miranda Lambert, Keith Urban, Gwyneth Paltrow and "Country Strong"; just in the past year the popularity of the genre has allowed its stars to overtake the Grammys, both in nominees and interest in other music award shows.

Perhaps we can attribute the rise in popularity of country music as much to Swift, Underwood, Miley Cyrus and "American Idol" as we can to the attacks on Sept. 11. But I'd wager that these fresh faces in the industry flocked to country music specifically because it resonated with the first historical event they were alive to witness.