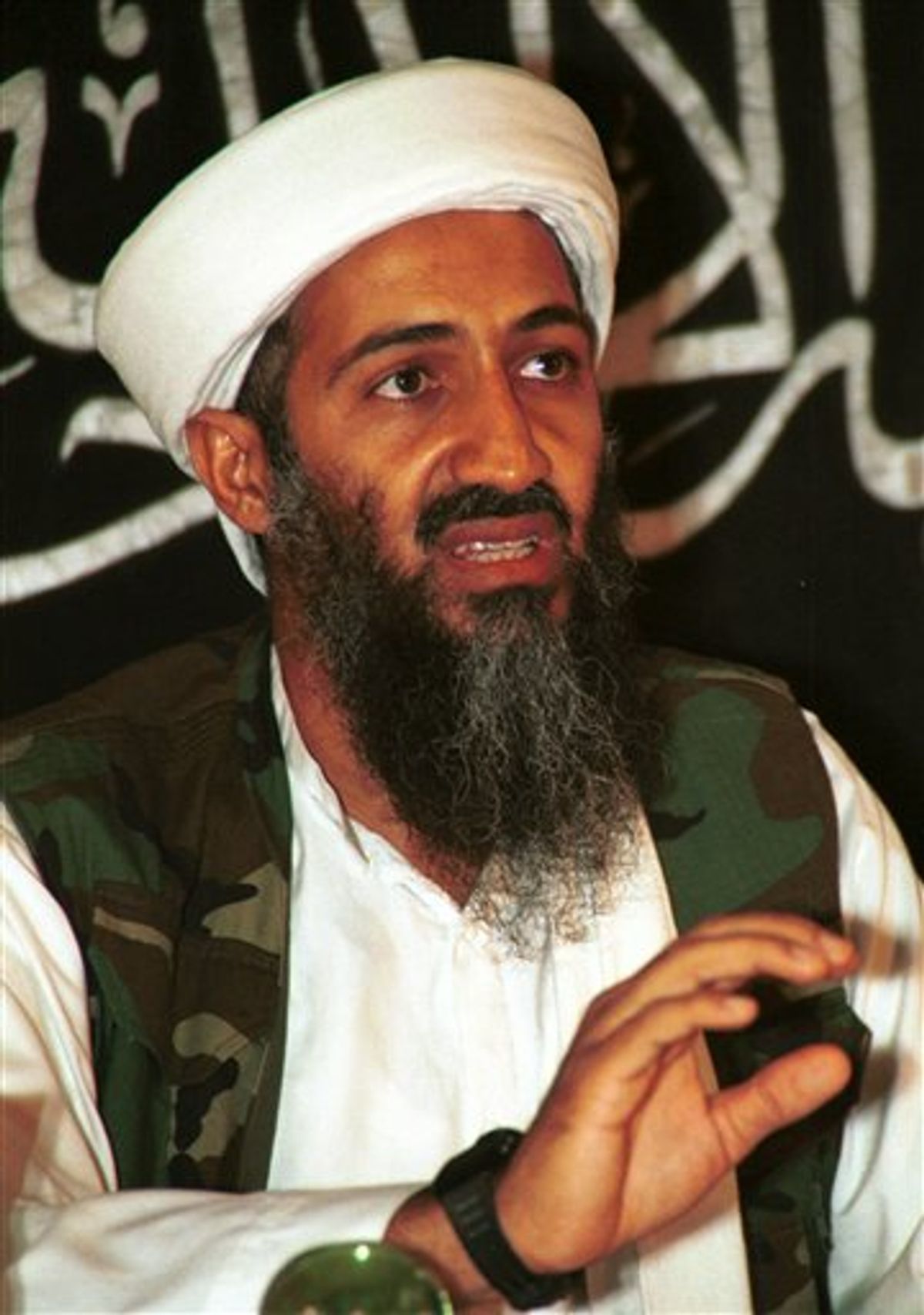 The street celebrations have long dispersed and the chants of "USA! USA!" only still echo across Twitter. Now, over 24 hours since the news of Osama bin Laden's death, details of the raid that killed him are being thrown into question by differing White House narratives and the scramble to determine the significance of his demise begins.

The White House goes back on much of Deputy National Security Advisor, John Brennan's, detailing of the bin Laden raid:

During a press briefing Monday afternoon, Brennan offered up an uncertain but juicy narrative about the raid that killed the al-Qaida leader: Reportedly, bin Laden used one of his wives as a human shield; it was suggested bin Laden was armed; and Brennan said that bin Laden's son Khalid was killed in the raid.

Within hours, the White House had modified every one of these claims, reported Politico late last night:

"During a background, off-camera briefing for television reporters later Monday, a senior White House official said bin Laden was not armed when he was killed, apparently by the U.S. raid team ... Another White House official familiar with the TV briefing confirmed the change to POLITICO, adding, 'I’m not aware of him having a weapon.'"

Secondly: "A senior official also corrected what Brennan described earlier as 'my understanding' that the woman who acted as a shield for bin Laden was one of his wives and was killed...''A different guy's wife was killed,' a different official familiar with the briefing for TV reporters said Monday night. Bin Laden’s wife was 'injured but not killed,' the official said."

And finally: "In another discrepancy, Brennan said during his on-the-record briefing that bin Laden’s son Khalid was killed in the attack. However, the official White House transcript had the counterterrorism adviser saying it was another son, Hamza, who perished in the raid."

Neither Politico, nor the White House were able last night to account for the modifications to the narrative, but no doubt today much media energy will focus on "what really happened".

In another Politico scoop, Mike Allen reported Monday night that, according to a U.S. official, "the 'mother lode of intelligence' had been seized during Sunday's raid on Osama bin Laden’s compound. Navy SEALs grabbed personal computers, thumb drives, and electronic equipment during the raid that killed the al-Qaeda leader. The official said 'hundreds of people' are exploring the data, and intelligence operatives in Washington are excited to find out what is there. 'It is going to be great, even if only 10 percent is actionable,' the official said."

As of yesterday afternoon, the fulcrum of the story moved to Pakistan: how much did the authorities know about bin Laden's whereabouts? Should they have known or done more?

Salman Rushdie weighed in on the Daily Beast:

In the aftermath of the raid on Abbottabad, all the big questions need to be answered by Pakistan. The old flim-flam (“Who, us? We knew nothing!”) just isn’t going to wash, must not be allowed to wash by countries such as the United States that have persisted in treating Pakistan as an ally even though they have long known about the Pakistani double game—its support, for example, for the Haqqani network that has killed hundreds of Americans in Afghanistan.

And as the BBC reported Tuesday, that "the ISI, has said it is embarrassed by its failures on al-Qaeda leader Osama Bin Laden. An ISI official told the BBC the compound in Abbottabad where Bin Laden was killed by US forces on Sunday had been raided in 2003. But the compound "was not on our radar" since then, the official said."

It is worth recalling that the U.S. have long been skeptical about the ISI. As was revealed last week in leaked dossiers on Guantanamo Bay, the U.S. has described the Pakistani intelligence group as a "terrorist" organization.

A number of writers are already considering bin Laden's death in light of the Arab Spring.

"The death of the founder and spiritual leader of the global terrorist network, coming amid Arab pro-democracy uprisings that had already raised questions about Al Qaeda’s relevance, may further undercut the appeal of the violent extremism Bin Laden stood for," write Scott Shane and Robert F. Worth in the New York Times. They speak to a former bin Laden ally, who intimates that bin Laden "had not really led the group for the last 10 years."

"'He was always a symbol,' said Mr. Abdel Rahman, 38, the eldest son of an Egyptian sheik imprisoned for his role in plotting to attack New York City landmarks. 'But as a movement, he was unable to lead and manage as he was being pursued so closely.'"

Another important point worth focussing on comes from Mona Eltahawy, writing an opinion piece in the Guardian. Eltahaway chides the "USA! USA!" chanting and the "frat boy" style celebrations witnessed at Ground Zero Sunday night (as did David Sirota on Salon Monday) and she writes:

Good riddance, Bin Laden. I long detested you and knew that when Mohamed Bouazizi set himself on fire in the Tunisian town of Sidi Bouzid last December, he was igniting a fire that would render irrelevantBin Laden the man and his inflated self-importance. When Tunisians overthrew Zine El Abidine Ben Ali in 29 days and Egyptians Hosni Mubarak in 18 days it was an appropriate rebuke to dictators and Bin Laden. What had become more mesmerising to young people in the Middle East and North Africa: change via revolutionary fervour that has blown apart stereotypes of Arabs and Muslims, or the hate-filled al-Qaida message that falsely promised change through nihilistic violence?...

...The scene at Ground Zero was like a parody of Team America, the film created by the South Park team to parody Bush's America gone wild on nationalism. Now that we've parodied the parody, can the frat boys go home and can we return to the revolutions of the Middle East and north Africa that symbolically killed Bin Laden months ago?

The Arab Spring illustrated the complexity and variety of situations across Muslim nations, which loosened bin Laden's purchase as a figure representative of Islam, and broke down the pernicious "us versus them" narrative, which reared its head in the wake of 9/11. Eltahaway makes this point poignantly.