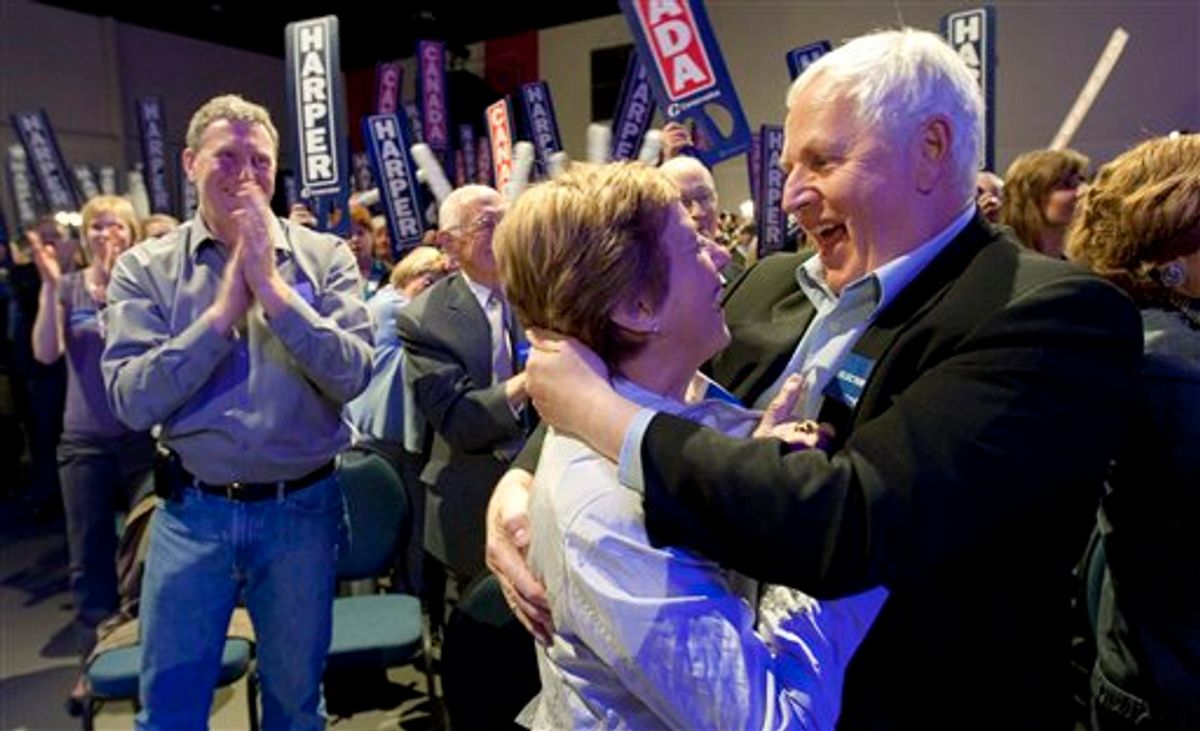 Harper, who took office in 2006, has won two elections but until Monday's vote had never held a majority of Parliament's 308 seats, forcing him to rely on the opposition to pass legislation.

While Harper's hold on Parliament has been tenuous during his five-year tenure, he has managed to nudge an instinctively center-left country to the right. He has gradually lowered sales and corporate taxes, avoided climate change legislation, promoted Arctic sovereignty, upped military spending and extended Canada's military mission in Afghanistan.

Elections Canada reported results on its website, giving the Conservatives 167 seats, which will give Harper four years of uninterrupted government.

"We are grateful, deeply honored, in fact humbled by the decisive endorsement of so many Canadians," Harper told elated supporters at the Telus Convention Centre in Calgary, Alberta.

The leftist New Democratic Party was projected to become the main opposition party for the first time in Canadian history with 102 seats, tripling their support in a stunning setback for the Liberals who have always been either in power or leading the opposition.

Harper was helped by the NDP surge, which split the left-of-center vote in many districts, handing victory to Conservative candidates, especially in Ontario, where the Liberals were decimated in their last national stronghold.

Former colleagues of Harper say his long-term goals are to shatter the image of the Liberals -- the party of former Prime Ministers Jean Chretien, Lester Pearson and Pierre Trudeau -- as the natural party of government in Canada, and to redefine what it means to be Canadian.

Harper, who comes from the conservative western province of Alberta, took a major step toward that goal on Monday night as the Liberals suffered their worst defeat in Canadian history -- dropping to 34 seats from 77, according to the preliminary results.

"Democracy teaches hard lessons, and we have to learn them all," Ignatieff told a somber gathering in Toronto.

Ignatieff, who even lost his own seat in a Toronto suburb, said, "I will play any part that the party wishes me to play as we go forward to rebuild."

Stephen Clarkson, a professor of political science at the University of Toronto, said the 52-year-old Harper should now be considered a transformative figure in Canadian history.

"It's a sea change," Clarkson said.

The New Democrats' gains are being attributed to Layton's strong performance in the debates, a folksy, upbeat message, and a desire by the French-speakers in Quebec, the second most populous province, for a new face and a federalist option.

Voters indicated they had grown weary with the separatist Bloc Quebecois, which had a shocking drop to four seats from 47 in the last Parliament. Bloc leader Gilles Duceppe lost his own seat and immediately resigned.

Quebeckers said separatism was still an important force, despite the province's rejection of the Bloc.

"I would caution anyone to think that the independence movement is dead at any time," said Bruce Hicks, a political scientist at the Universite de Montreal. "This is one of those burning embers things. It takes very little to ignite it, but right now it's only embers."

The Green party won its first seat ever in the House of Commons with leader Elizabeth May winning in a British Columbia district.

The NDP's gains marked a remarkable shift in a campaign that started out weeks ago looking like a straight battle between Harper and Ignatieff, a distinguished academic, with the 60-year-old Layton recovering from prostate cancer and a broken hip.

Harper counted on the economy to help hand him the majority. Canada has outperformed other major industrialized democracies through the financial crisis, recovering almost all the jobs lost during the recession while its banking sector remains intact. He said he would continue his plan to create jobs and growth without raising taxes.

"Canadians can now turn the page on the uncertainties and repeat elections of the past seven years and focus on building a great future for all of us," Harper said.

Harper campaigned in the last few days on a message that the New Democrats stood for higher taxes, higher spending, higher prices and protectionism. He called the election a choice between "a Conservative majority" and "a ramshackle coalition led by the NDP that will not last but will do a lot of destruction."

Gerry Nicholls, who worked under Harper at a conservative think tank, has said that having the New Democrats as the main opposition party would be ideal for Harper because it would define Canadian politics in clearer terms of left vs. right.

The Conservatives have built support in rural areas and with the "Tim Hortons crowd" -- a reference to a chain of doughnut shops popular with working class Canadians. They also have blitzed the country with TV attack ads, running them even during telecasts of the Academy Awards and the Super Bowl.

Lawrence Martin, a political columnist for The Globe and Mail newspaper and author of "Harperland: The Politics of Control," calls Harper "the most autocratic and partisan prime minister Canada has ever had."

But to remain in office through the longest period of minority government in Canadian history, Harper had to engage in a constant balancing act. The three opposition parties combined held 160 seats in the last Parliament, while the Conservatives held 143. The Liberals held 77, the New Democrats 36 and the Bloc Quebecois 47.

Harper has deliberately avoided sweeping policy changes that could derail his government, but now has an opportunity to pass any legislation he wants with his new majority.