An overnight poll gives the president his highest approval rating in years. But it may be fleeting 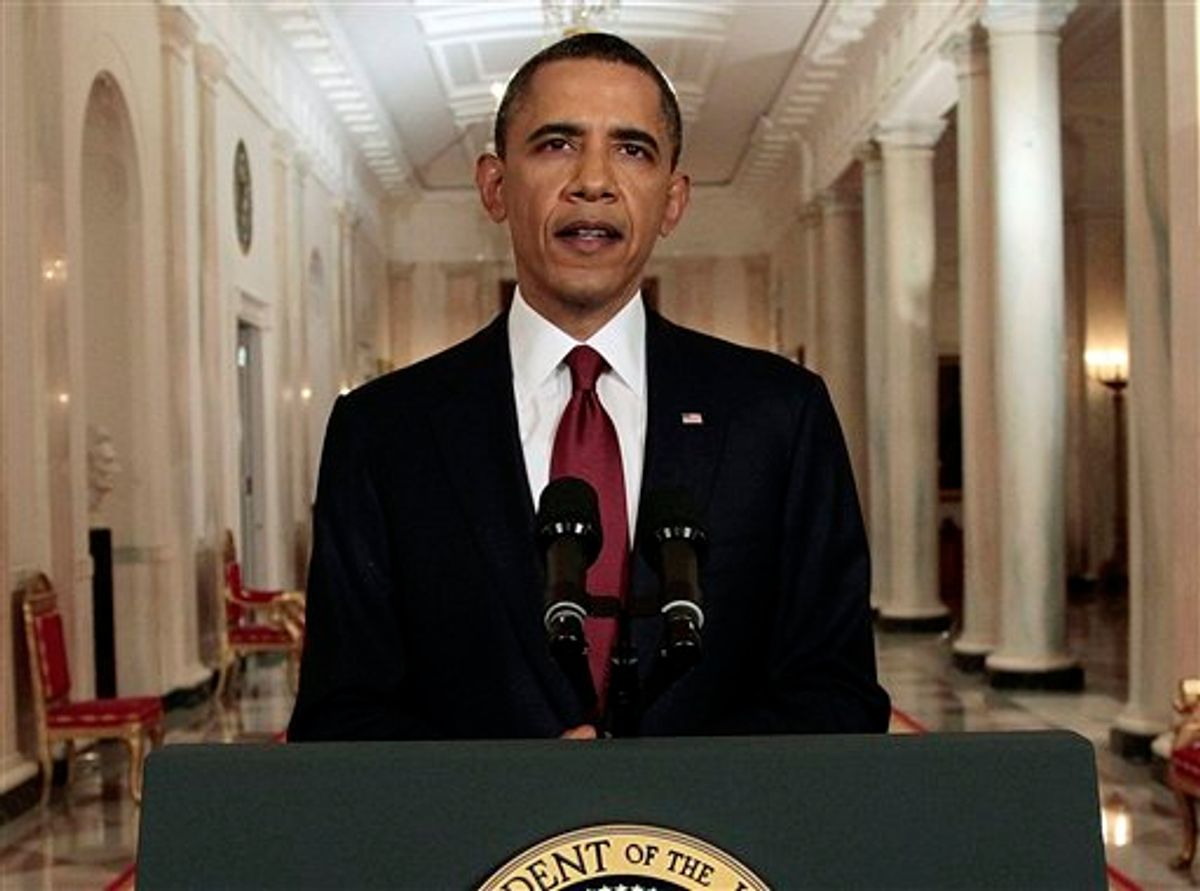 President Barack Obama reads his statement to photographers after making a televised statement on the death of Osama bin Laden from the East Room of the White House in Washington, Sunday, May 1, 2011. (AP Photo/Pablo Martinez Monsivais) (AP)
--

We now have our first measure of the impact of Osama bin Laden's killing on President Obama's domestic political standing. A poll conducted Monday night by ABC News and the Pew Research Center gives the president a 56 percent approval rating -- his highest mark in any independent survey in recent memory. He was at 47 percent in an ABC News/Washington Post poll two weeks ago, and Gallup's latest daily tracking number (a three-night average based mostly on phone calls that were made before news of bin Laden's death broke late Sunday night) also puts him at 47 percent.

This is, obviously, good news for the White House. And it's certainly possible that Obama's approval score will be even higher when other polls are released this week, after the glowing news coverage of the past two days has sunk in more.

Still, the new ABC poll mainly underscores a point I made Sunday night, just after Obama addressed the nation: As tempting as it is to regard this moment as a fundamental turning in domestic politics, its long-term political value to the president will probably be minimal. Polling bounces from major foreign policy developments -- even those that set off national celebrations -- tend to be fleeting. Think back to the end of 2003, when American troops captured Saddam Hussein and George W. Bush's approval rating -- which had been in precipitous decline as the bad news in Iraq mounted -- zipped back over the 60 percent mark. In that moment, Democrats were discouraged. Finally, after nearly two years of post-9/11 political invincibility, Bush's standing had fallen to earth -- but now he'd be a hero again. Except the Hussein bounce didn't last. By early 2004, Bush's approval rating was back to perilous territory, where it remained for the rest of the campaign.

It's fair to expect the same basic thing to happen with Obama now. In Bush's case, chaos in Iraq dragged his numbers back to their natural level after Hussein's capture distorted them. In Obama's case, the culprit will be the economy. Economic anxiety is actually growing right now, and the ABC/Pew poll finds that voters now give Obama just a 40 percent approval rating for his leadership on the economy. Thus, after a few weeks -- or even just a few days -- of artificially inflated approval ratings, it's hard to imagine Obama's scores slipping right back to where they were before Sunday night, until and unless the economy picks up.

That said, bin Laden's death is not entirely devoid of long-term political value for Obama. If nothing else, it gives him and his supporters a powerful tool to combat the right's efforts to paint him as a weak, terrorist-coddling commander-in-chief -- and it gives him another signature achievement to tout. If the election ends up being close next year, this could end up making a big difference.