Why do we need to relive a death -- in cheesy computer animation? 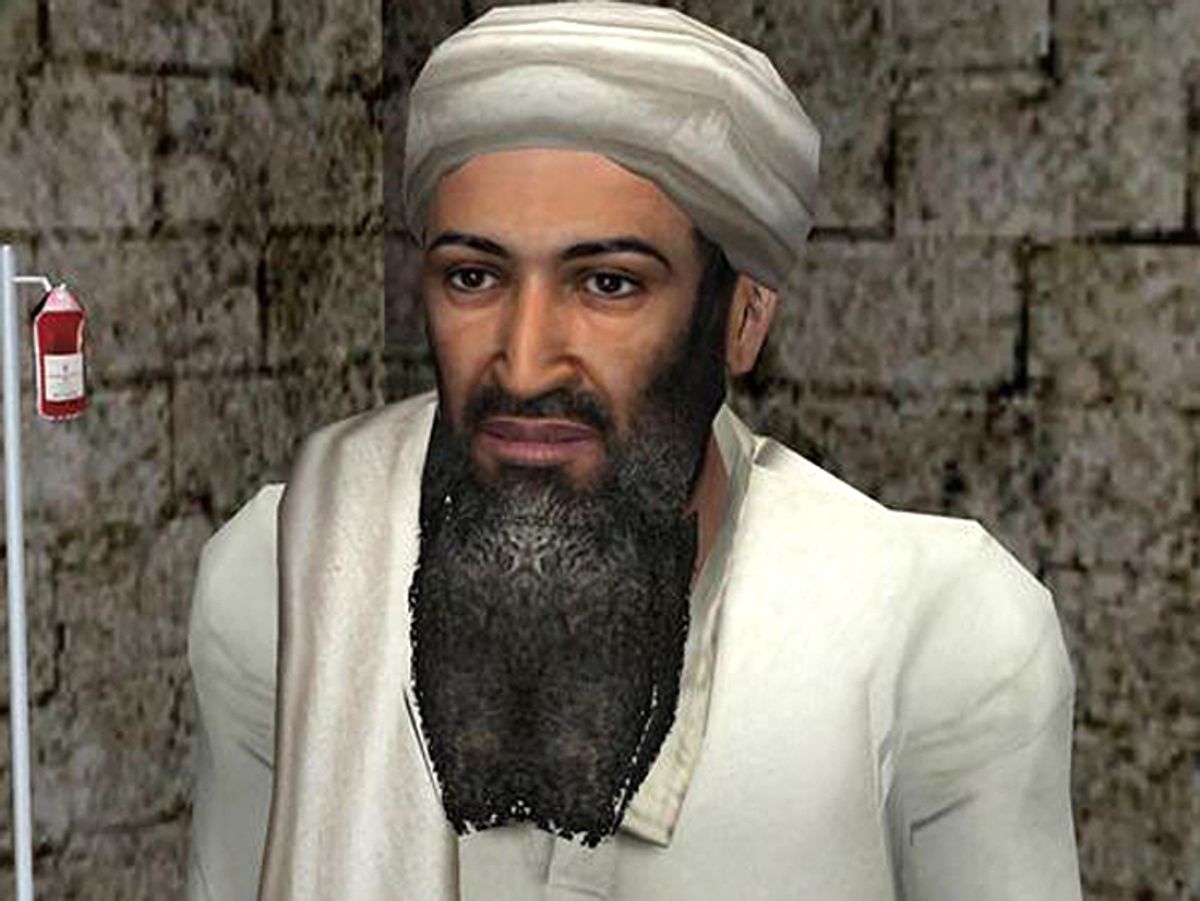 For millions of people around the world, the news Sunday night that Osama bin Laden had been killed was a satisfying moment of resolution. But for some, the only way it could have been better would be if they'd been there themselves when he breathed his last. If only there were some way … Oh, wait. This is the Internet. Let the killing games and animated re-creations begin!

It wouldn't be news if we didn't have the inevitable Taiwanese animation, and sure enough, Osama's corpse had barely hit the ground when the NMA World Edition was racking up a few thousand views. What is surprising, however, is that it was  pulled Tuesday afternoon. Having seen it, I can speculate that it wasn't the Tony Montana-style execution scene, the image of Navy SEALs urinating on bin Laden's corpse, or even Obama's triumphant Oval Office chest bumping that made cooler heads decide that perhaps this was the re-creation that finally went too far.  I'm guessing it had something to do with the depiction of what was awaiting bin Laden in hell -- getting raped by 72 pigs. TOO SOON.

But even without pig rape action, there are still plenty of other versions of bin Laden's demise to be had. Shooter game series Kuma War, which has in the past offered such "real war news, real war games" as Operation Spear and the capture of Saddam Hussein, is releasing on Saturday "Kuma\War Episode #107: The Death of Osama Bin Laden." The free series has been mostly on ice of late, but its CEO, Keith Halper, told Kotaku Monday that "We can't close the door on Kuma War 2 until we've told this absolutely critical last story." At last, your chance to put a bullet in a jihadist -- and just in time for Mother's Day.

Other games have been out there for as long as people have been taking off their shoes at airports. The 8-year-old "War on Terrorism" game gives you the simple satisfaction of punching bin Laden in the face. And "Fugitive Hunter: War on Terror"  lets players hunt down bin Laden, rough him up and ultimately arrest him and kick him into a helicopter of justice.

Does anyone need the fake experience kicking a real person's butt, possibly while sipping a Pepsi Max and tapping on a laptop? Of course not. The thrill of justice -- even justice for a very bad man -- doesn't happen with the click of a mouse, any more than any of the people cheering "We got him!" Sunday night actually got him. Yet human curiosity is a touchingly persistent thing. The mind begs to know what it was like at historic moments. The appetite for retribution hungers for the feeling of satisfaction. And so it makes up games and cartoons, shamelessly simplistic -- and therefore reassuringly safe -- parodies of real experience. You want to know what it was like when Osama bin Laden got a bullet to the head? You never will. It's a safe bet it wasn't as simple and clean as a computer-generated chess piece falling hilariously and bloodlessly on the CBS morning news. But it helps set the scene in the imagination, far from the sound of bullets and the smell of blood. It feels like revenge. It's only a game.