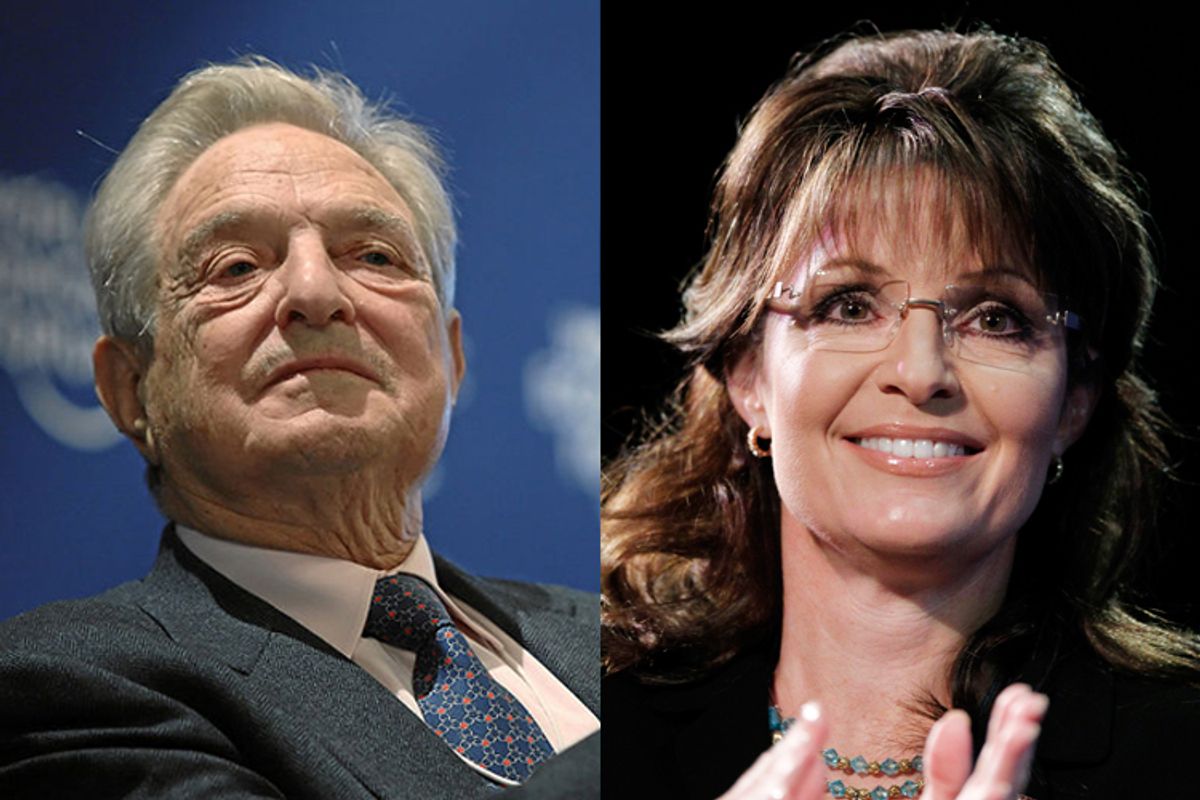 The big Sarah Palin news today is that she has lost her longtime foreign policy adviser, Randy Scheunemann.

Scheunemann is a well-known neoconservative who worked for Jesse Helms and was intimately involved in the push for the Iraq war. He later became an aide to John McCain on the 2008 presidential campaign, where he met and linked up with Palin. He's been associated with her ever since.

The question is: Why did they Scheunemann, who runs the lobbying firm Orion Strategies, leave Palin now?

"Randy flat out said, 'We can't give you the time,'" [Palin spokesman Tim] Crawford said.

"I very much enjoyed my time working with Governor Palin and wish her and her family all the best," Scheunemann said in an email. "If she decides to run for any office again, she will be a formidable candidate."

Regular readers will remember that Scheunemann, while working for Palin, also lobbied for one of George Soros' groups, the Open Society Policy Center. After I reported that connection, Palin took a bit of flack on the right for her (admittedly tenuous) link to the liberal billionaire.

But is it accurate that Scheunemann simply doesn't have the time to work for Palin?

It's impossible to know his schedule, of course (I have asked Orion's Michael Goldfarb and I will update this post if I hear back). Orion Strategies does appear to have recently picked up a new client -- meaning it is now registered to lobby for a total of three entities. One is Soros' group. Another is the National Shooting Sports Foundation, the trade association for the gun industry.

The new client is an entity called the Corbiere Trust Company Limited. It is based on the English Channel island of Guernsey, which is a British crown dependency and tax haven.

Corbiere is associated with the ex-oil tycoon Mikhail Khodorkovsky, who is currently in prison after being convicted of fraud in a controversial (and allegedly politically motivated) case in Russia last year. Orion lobbies on "rule of law and human rights in Russia" for Corbiere, according to disclosure forms. Corbiere's own activities are described in the disclosure as "asset management including Khodorkovsky's legal defense."

The trust appears to have paid Orion $15,000 in the first quarter of 2011, but another document suggests the overall expenditure may be $180,000. (Corbiere has spent over $1 million on lobbying on Russian issues in recent years.)

So, if the official version of the Orion-Palin split is true, this appears to be what Scheunemann is spending his time on instead of Palin. It's also possible that Orion is doing other work (like consulting) that would not require lobbying disclosures.

Scheunemann's replacement, by the way, is Peter Schweizer, a fellow at the Hudson Institute Hoover Institution and the editor-in-chief of Andrew Breitbart's Big Peace website.