After my son died, I met his daughter

After David's drug overdose, my wife and I struggled to keep hope. Then we got a call from the child he never knew 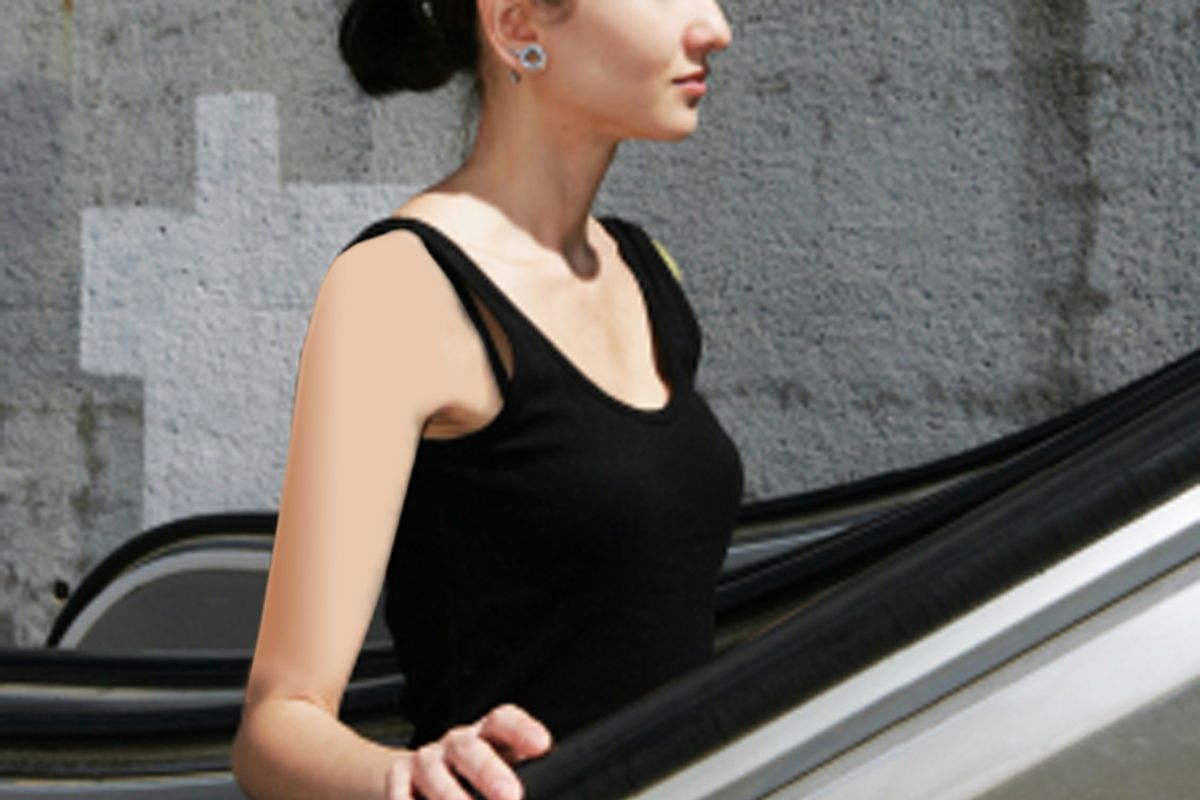 My son David died of a drug overdose, ruled accidental, on Father's Day of 2004, a month after his third wife ended their turbulent marriage. Only 35 at the time, David left behind three wonderful children, whom he adored, raised in California by his second wife. He also left behind six boxes of his possessions, mailed to us two years later, which included the numerous short stories and plays he wrote, a DVD of his performance as Che Guevara in a local production of "Evita" and every card and letter his mom, my wife, Nadeen, ever sent him. But this is a story about something else he left -- something that took us entirely by surprise.

It was January 2008, the kind of warm San Diego day that transplanted New Yorkers never take for granted, when the phone rang.

My wife and I knew that David had fathered a girl, given up for adoption, while he was stationed in England in the Air Force, but we thought that was the end of the story. It had been nearly 20 years since that telephone conversation, one spring day in 1989, during a happier time, when David was embroiled in soap opera relationships with the MDs training him to be a surgical assistant. When he first told us one of the nurses was pregnant with his child, we toyed with the idea of trying to adopt her. Nadeen and I were enthralled with our one grandchild, Nicole, and the idea of being real parents again tempted us to distraction. We even had a name picked out: Kate (for Katharine Hepburn). But we never pursued that dream. Our relationship with David was tumultuous, unpredictable, and inserting ourselves into this plot twist seemed unwise. We quietly said goodbye to a little girl we would never know.

And yet, here she was on the phone, a freshman at the University of Virginia. And her name was even Kate -- short for Catherine, as in "the Great." How strange, how thrilling. Four years after we had to let go of our son, his daughter arrived.

Kate found us by googling, of course. Nadeen and I are psychology professors and authors of widely used intelligence tests, which Kate had discovered online. Two years earlier, Kate had befriended her biological mom in Houston. She thought about reaching out to us then, but her father forbade her until she turned 18 -- "and my folks weren't thrilled about it in the least," she explained. Why? Let's just say her family's one contact with David wasn't pleasant. When her parents, then living near New York City, wanted to legalize the adoption, they asked David to notarize a form.

"Sure," he said. "Fly me in for a week's paid vacation in Manhattan, and I'll sign on the dotted line."

Since he was a toddler, David was charismatic, charming, but our relationship was always shot through with tension. His short life was marked by drama and passion but also by drugs (prescription and otherwise) and illnesses of every description. Once, when he literally couldn't move his legs for a few months, he diagnosed himself with multiple sclerosis -- but his paralysis disappeared overnight when he heard that "Evita" was holding tryouts. David's erratic behavior affected us all, including his older sister and kid brother. He was everyone's best friend during the good times, but family life was chaotic when he was out of control. David once bragged that his adventures "are wilder, Dad, than anything you've read in books or seen in movies or can even imagine."

When Kate's parents found out that David died, they withheld the news, worried that she couldn't cope with it. Instead, she found out about David's death while surfing the Internet during a boring high school class. "And there I was, in shock, sobbing," she told us, during that first phone call, "thinking that you'd lost your son and knowing that I'd never meet my real father." Nadeen and I held back tears as we felt Kate's despair at her loss and relived the terrifying moment when we first found out that David had overdosed.

We began daily e-mail exchanges with Kate. Her academic passion was French, which she spoke fluently, and since Nadeen and I had traveled throughout France many times, the mutual passion helped forge a bond. She addressed each message to Cher Grandpère and Chère Grandmère, and we often wrote back and forth in French, though Nadeen and I usually needed our pocket Larousse to unravel the idioms and complex grammatical structure of her messages. But her keen sense of humor, warmth, occasional depression and vulnerability needed no translation.

We had already planned a trip to New York City in mid-February, which seemed a perfect time to meet Kate. So, five weeks after her phone call, we arranged to fly Kate from Richmond to visit with us for a day in New York. We knew from her Facebook photos that Kate was beautiful, with her shoulder-length brown hair and expressive eyes, but meeting her at the airport put a whole new perspective on her beauty. As she came down the escalator, hair pulled tightly back in a ponytail, it was as if David were greeting us. David's other children look like their pretty mother, with few traces of him. With Kate, the resemblance was startling. Not just the shape of her face or the color and texture of her hair but the way her nose scrunched when she pushed up on her glasses, her exaggerated, wide-eyed look of surprise, her self-conscious nail-biting, her love of poetry and intellectual pursuit. How could it be that someone who never met our son could act so much like him?

Later that evening, we watched the DVD of David performing in "Evita." Tears streamed down our faces as he sang in a hauntingly beautiful baritone about the dramatic death of the charismatic, egotistical wife of Juan Peron, who died in her 30s but powerfully lived on. The irony was not lost on Nadeen and me.

I hit the pause button on the laptop.

"He's beautiful," Kate said, smiling through her tears. "How can you guys deal with the loss, the pain?"

But if we were going to have a relationship with Kate, it would have to be a real one. We would have to wrestle with the complexity of who David was and what we were feeling. Yes, we were grieving, but our tears were also tears of despair and anger and, yes, guilt. We told Kate about David's gifts as a writer, performer and storyteller, about his ironic wit and insatiable curiosity. We also told her about his emotional outbursts, threats, attacking emails, how his rage would escalate to near violence before shifting quickly to a self-effacing joke.

Kate listened. She asked difficult questions and offered valuable insight. The next morning, at the airport, I asked if she would call us Nana and Papa. I wanted her to know she was no less our grandchild than the seven we knew from birth. Before boarding, she gave us a group hug and said, loud enough for the whole world to hear, "I love you, Nana and Papa!"

The next year, in the spring of 2009, Kate was sailing through her second semester when boyfriend and roommate problems sent her into a tailspin of depression. We rallied behind her, joining forces with her parents in Virginia, and helped her get past the rough patch. She bounced back that semester, playing a trollop in a college production of "As You Like It," and came to visit us out in San Diego. Nadeen and I marveled at how she possessed one quality her father didn't -- resilience.

When I try to express how I feel about losing my son, I go back to something the Quaker poet John Greenleaf Whittier once said: "For all sad words of tongue or pen, the saddest are these: 'It might have been!'" But over time, the despair and fury I felt about David's Past have been replaced by hope and anticipation of Kate's Future. Kate's wedding ceremony. Kate's own family. Kate's life ahead of her.

Kate is her own person, unique and complex, naive yet wise beyond her years. She is not David, but in many ways she shares both his talent and his tender spots. I see in her the best parts of David, the things in him that we glimpsed occasionally only to watch them snuffed out. In her, I see all that promise, finally, in full bloom.

Alan S. Kaufman, Ph.D., has been clinical professor of psychology at the Yale University Child Study Center in the School of Medicine since 1997. He has published 22 books, 50 chapters and forewords, and over 150 journal articles, mostly on the clinical interpretation of intelligence tests, targeted for psychologists and graduate students. Kaufman lives in San Diego with his wife Nadeen, with whom he has authored 14 intelligence, achievement, and neuropsychological tests used worldwide, most notably the Kaufman Assessment Battery for Children (K-ABC and KABC-II).