Why "The Voice" deserves to topple "Idol" 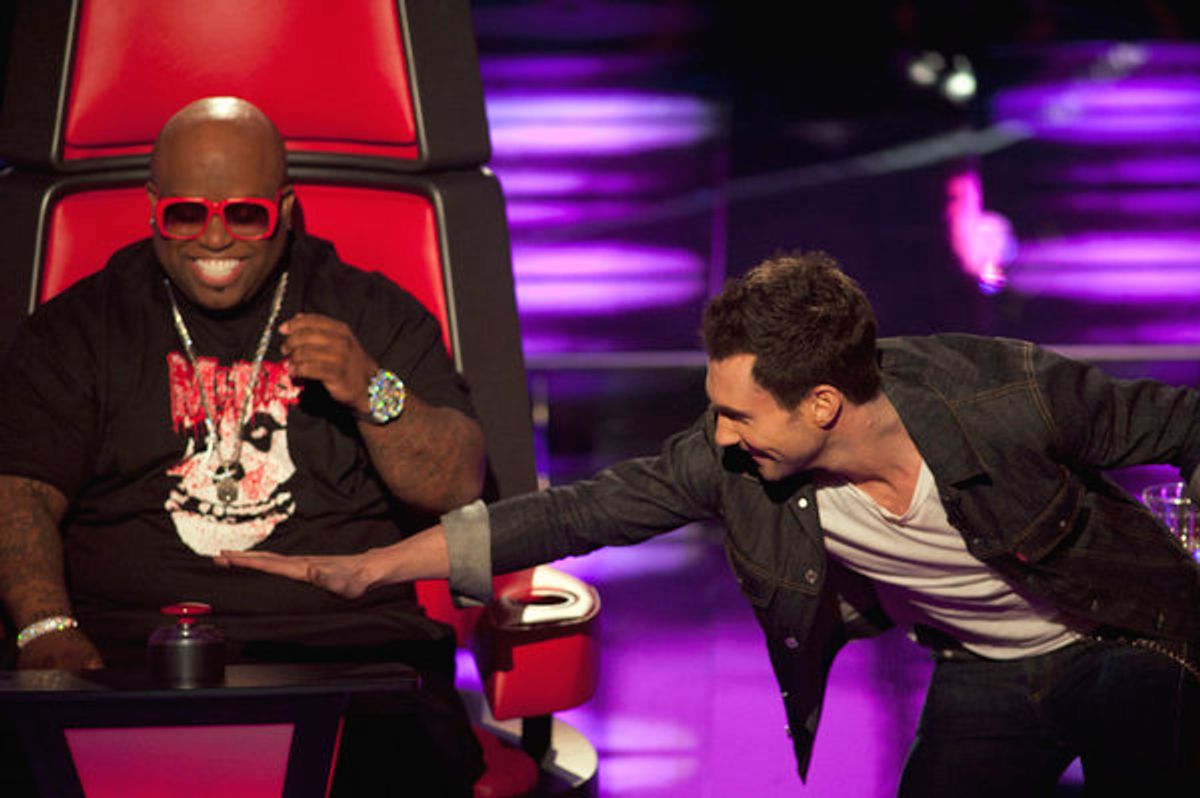 I have a crush on NBC's "The Voice" (Tuesdays 10 p.m./9 central). Whether it will blossom into an obsession remains to be seen, but I can already tell you that just two episodes into its run, the show is giving me everything I used to get from "American Idol," plus things that "Idol" never thought to provide.

For one thing, there's something at stake for the judges. The auditions began last week and wrapped up last night. By the end, the show's celebrity judges/mentors, or "coaches"  -- Christina Aguilera, Cee-lo Green, Adam Levine and Blake Shelton; all influential and accomplished pop music stars -- had placed eight performers in their personal stables, for a total of 32 personal votes of confidence.

This is a huge difference from "Idol," a show where the judges are detached from the singers' struggles. They sit there like decadent aristocrats readying a thumbs up or thumbs down, confident that about 90 percent of the decisions pertaining to a singer's fate will rest in the hands of the audience; all they really have to do is make pithy remarks. The hard work of shaping the performers' technique and stage presence falls to guest gurus (this season it's Interscope Records founder Jimmy Iovine), plus whatever big-name composers, performers or record producers stop by.

But on "The Voice" -- which is executive produced by "Survivor" puppetmaster Mark Burnett -- the celebrity "coaches" have to attach themselves to contestants. They have to say, in effect, "I believe in these performers strongly enough to tie my name to theirs, then prove I have a good ear for talent and a knack for mentoring by seeing them through to the end of the contest." This seems like a minor tweak to the "Idol" format, but it makes a world of difference; it damn sure makes the audition process livelier.

Speaking of tweaks: You may have heard that during the auditions, the coaches started out with their "Tron"-looking chairs turned around, forcing them to judge each performer initially on voice alone. If their guts told them a performer might be a good match for their sensibility, they'd slap a button on the arm of the chair and swivel around to face them, effectively declaring themselves interested in becoming that singer's mentor. If more than one judge turned around, the balance of power shifted. Suddenly it was a seller's market rather than a buyer's, and the performers had to choose between, say, Aguilera or Levine, or Green or Shelton.

Granted, if you're an unknown singer, it's no tragedy to end up being coached by Cee-lo Green as opposed to Christina Aguilera. But the "Voice" format still encourages judges and performers to look inward and ask basic questions: "What am I now, and what would I like to become?" "Do I want to stick to what I already know I can do, or venture into unknown areas and risk public embarassment?" (That's how Green, a consummate R&B singer, ended up picking three singers with styles far outside of his comfort zone: black-hatted country crooner Curtis Grimes, and Tory and Taylor Thompson, twin sisters who always sing together and whose sound Aguilera likened to a bubblegum ad.)

Another plus: Moreso than "Idol," "The Voice" gives you a nearly tactile sense of what nerve it takes to get up onstage before an audience and try to win it over -- and the mix of cold strategizing and gambler's nerve that goes into picking material. Last night there were three bold, arguably foolhardy song choices, only one of which paid off. Two female singers did hits that had been recorded by Blake Shelton's fiancée Miranda Lambert; both got sent packing because while Shelton admired their brazenness, their performances didn't do much for him. The one-named Austin singer Nakia, on the other hand, dared to perform Green's biggest hit, "F--- You" (a.k.a. "Forget You" on commercial TV), and was so smooth and forceful that Green was compelled to swivel his neon Captain Kirk chair around and pick him. (This Nakia fellow already seems like the most original of the 32 candidates; he's a heavyset, bearded, openly gay man whose appearance suggests what would happen if Javier Bardem devoured Joe Cocker, and he's got a knack for banter; when Aguilera told him that she was "taken aback" by his aggressiveness, he replied, "It's okay ... Your loss!")

I love how each performer's entrance during the auditions was covered in a low-angle tracking shot following them out onstage; it made me think of a gladiator entering an arena. And the pre-performance backstage chatter was superior to the "Idol" equivalent, because it didn't just establish that the singers were nervous and hopeful, it gave you a sense of their spiky personalities. (When "host" Carson Daly, this show's equivalent of Ryan Seacrest, expressed wary admiration for Nakia's nervy song choice, but warned him, "...if you're off in the first 30 seconds--",  Nakia blurted, "That won't happen!")

I also love (there's that word again!) the wide array of life experience represented in the  lineup. There are very young performers with charisma but not much polish, or vice-versa, and singers who've been knocking around the edges of the industry for a while. Cherie Oakley, who ended up in Aguilera's stable, has been a backup singer for Carrie Underwood and Gretchen Wilson, and wrote Reba McEntire‘s No. 1 hit "Turn On the Radio." Minneapolis native Tim Mahoney -- who landed with Levine even though, as Levine put it, "I wanted a girl on my team, but sadly, you have a penis" -- is a stubbly 39-year old who has performed in who knows how many "country showcase" programs and looks a little bit like Al Capone on HBO's "Boardwalk Empire."

The worst singer in the show's first 32 has better pitch and breath control than anybody on this year's "Idol," but still there's plenty of room for improvement, even among the veterans. Is it better to be experienced and battered or gifted but unformed? After a confident start, will "The Voice" fold or soar? It's too early to guess. I don't want to get too excited too early; I hate being disappointed. The past decade has seen plenty of "Idol" wannabes come and go, and the previews of next week's show looked odd and cheesy, with clips of contestants competing against each other in a "sing-off" by doing duets of the same tune on a set that looked like a boxing ring. But with "Idol" growing staler and more listless by the week, I'm thrilled to see a would-be usurper storm in with verve and fresh ideas.