Are we powerless against high gas prices?

How much can you actually do about pain at the pump? 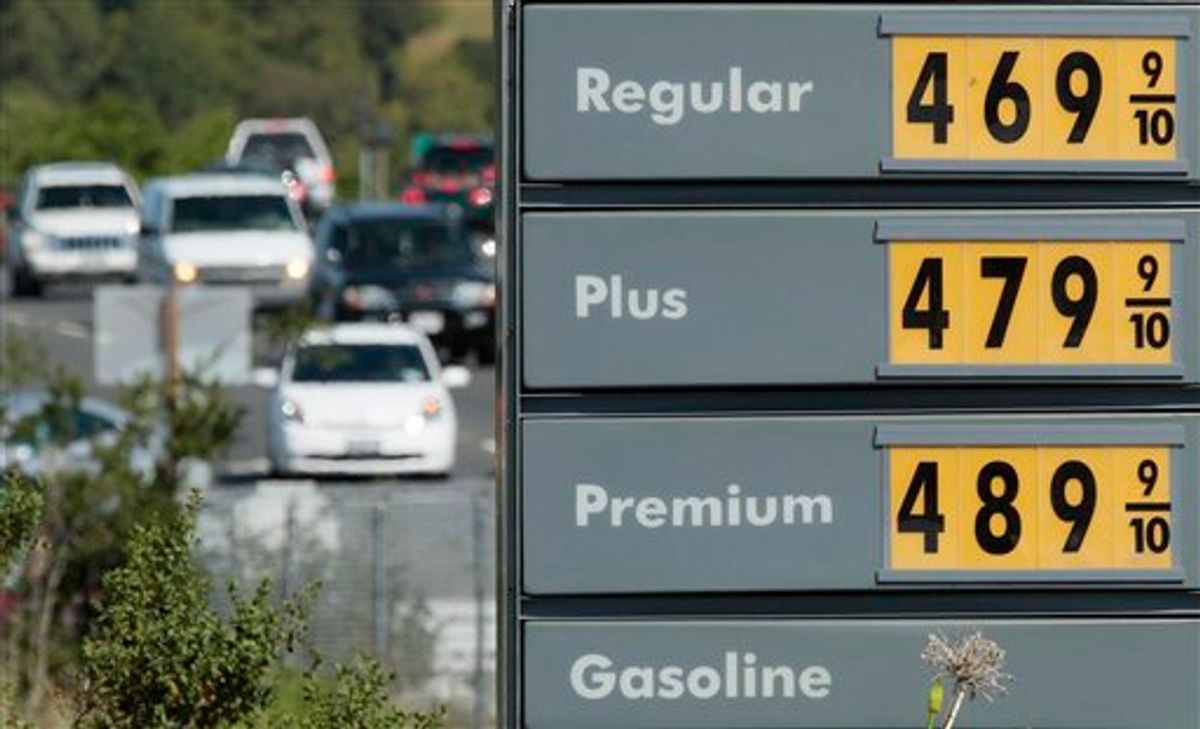 A price board is shown at a Shell gas station in Novato, Calif., Thursday, May 5, 2011. Oil tumbled nearly 7 percent Thursday amid new signs that demand for fuel in the U.S. is weakening. (AP Photo/Jeff Chiu) (AP)
--

While Operation Geronimo might grab most of the headlines, the price of gasoline is the real political football. You'd be hard-pressed to find a pundit or politician in the country who doesn't have a theory about the cause of surging crude prices. President Obama and congressional Democrats blame oil companies, whose soaring profits contrast uneasily against a static economy and the price of petrol. Meanwhile, Glenn Beck is one of many on the right who blame the EPA. Many are even speculating that pain at the pump could sink President Obama's reelection effort.

Political reverberations are probably little consolation to the penny-pinched American consumer. As the average price of gas closes in on $4 a gallon nationwide -- and rests well above that threshold in some regions -- people are shilling out record amounts of cash to keep their gas tanks full. According to a CNNMoney study, the average household spent $368 on gas last month -- or 9 percent of income over that period -- reflecting a nearly $200 increase in monthly outlay over the same time last year.

There may be light at the end of the tunnel. Some experts believe that prices have plateaued as demand for gas decreased. (Though it's disheartening to think it might be a result of persistently high unemployment.) Still, even if the price of crude stabilizes, it's unlikely to have as much of an impact as one might hope. It is a commonly observed quirk of our free-market economy that gas stations are much quicker to hike their rates during price shocks than reduce them after pressures diminish. A quick comparison of the price of a barrel of crude versus the average cost of gas seems to confirm those observations. And several economists have proven empirically that gas prices decrease twice as slowly as they rise, when compared against changes in the cost of crude.

Once consumers get a number in their head -- $10,000 for that car, $3.70 for that gallon of gas -- all subsequent choices are impacted by a new price's relation to that reference price.  When the car dealer says, "OK, $9,500," you think you have a good deal. When the nearest gas station drops the price to $3.63, the average consumer impulsively stops searching.

Those looking to save at the pump have always had a number of tools at their disposal to achieve at least a modicum of savings. (Don't use AC. Drive manual. Brake less. And drive slower, for God's sake!) Still, the proliferation of websites such as GasBuddy.com and MapQuest Gas Prices has equipped consumers with new, tech-savvy tools to exercise some frugality -- locating the lowest prices nearby. The mobile arms race, likewise, presents new options for saving. (It turns out there is an app for that.)

Still, even aggressively seeking the lowest gas price can backfire, as Loyola College professor Joseph Ganem pointed out to MSNBC. Being too bullish about savings -- if you're going far out of the way to enjoy them -- can end up costing more. He's set up a website to help calculate whether it's really worth it to prioritize lower prices over proximity.

Being smart about how you consume gas can pay dividends to an extent, but as long as gas prices hover around $4 a gallon -- and some think it could be that way for a while -- energy consumption could remain a thorn in the side of many Americans. Just be glad you don't live in rural Alaska.