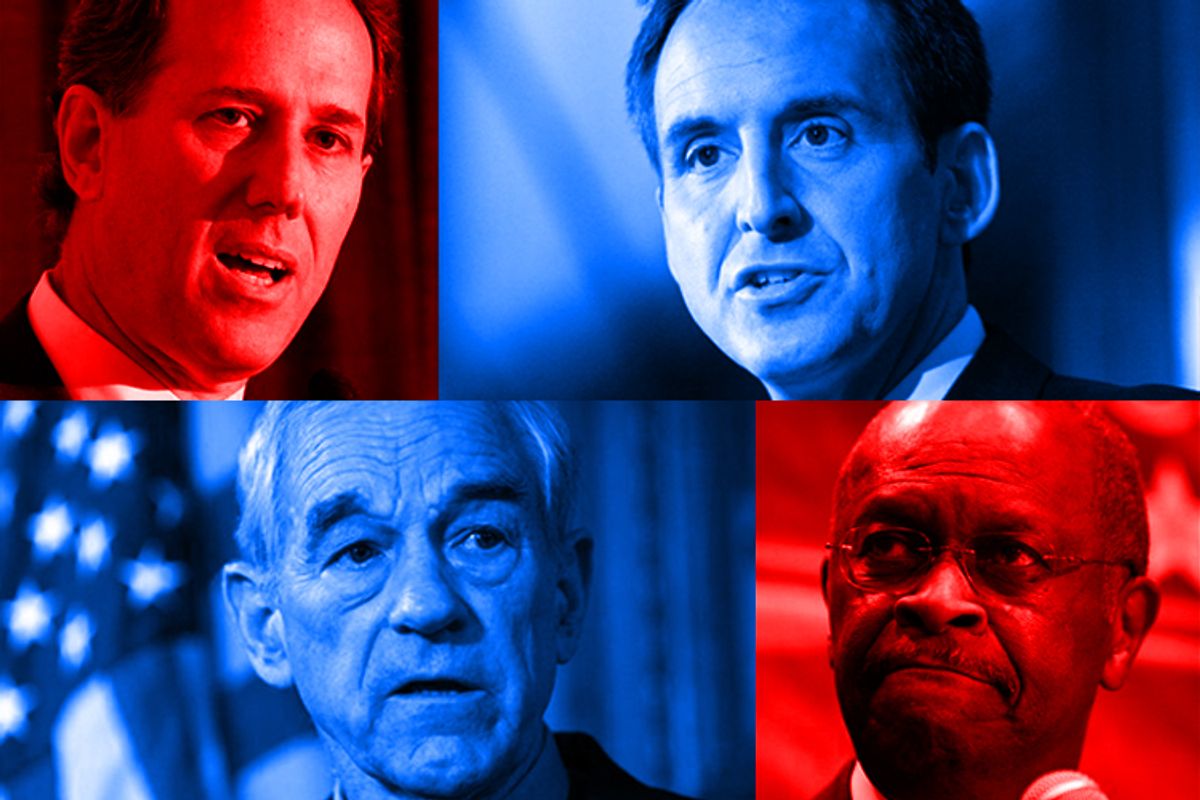 Buddy Roemer, the one-term Louisiana governor from long ago (whose reelection campaign ended in defeat at the hands of a Klansman), was none too happy when Fox News announced Wednesday that it was barring him from participating in the first Republican presidential debate, to be held in South Carolina Thursday night.

But he may actually be catching a break.

Tonight's event could well be the first time in history that a nationally televised presidential debate lowers the stature of every participant. A total of five candidates are set to take the stage at 9 p.m., when Fox News -- which customarily attracts several million viewers in that time slot -- goes live. Only one of them, former Minnesota Gov. Tim Pawlenty, has a realistic chance of winning the GOP nomination -- or even coming close. The other four are strident ideologues with niche appeal, nonexistent victory prospects -- and absolutely nothing to lose. Let's meet them:

* Herman Cain, the former CEO of Godfather's Pizza. Cain has run for office before, finishing a distant second (with 27 percent of the vote) to Johnny Isakson in Georgia's 2004 U.S. Senate primary. This means that, from an electoral standpoint, Cain has a weaker claim to being taken seriously as a candidate than even Alan Keyes; at least Keyes had won the GOP nomination in the two failed Senate bids that preceded his 1996 and 2000 White House forays. To the extent Cain has distinguished himself on the '12 trail, it's probably through his pledge to engage in hiring discrimination by barring Muslims from working in his administration.

* Rick Santorum: Santorum was drummed out of the Senate by Pennsylvania voters in 2006, losing his bid for a third term by 17 points to Democrat Bob Casey. Other modern era presidential candidates who lost Senate races before setting out to run for the White House include: Democrats Carol Moseley Braun (2004) and George McGovern (1984), and Republican Keyes. (You could also, I suppose, include Mike Gravel, who lost a Senate reelection campaign in 1980 and sought the 2008 Democratic presidential nomination.) Between them, they won a total of zero primaries and caucuses. Santorum won't do any better, but he is passionately opposed to abortion, gay rights and President Obama -- and he'll have plenty of time to prove it tonight.

* Gary Johnson: The former New Mexico governor is probably, as Salon noted last year, the most interesting Republican you've never heard of -- an authentic libertarian who wants to dismantle government but who also supports legal abortion and pot. Obviously, he'll barely make a dent once the primaries roll around (especially with Ron Paul in the race), but he'll get an unusual amount of airtime tonight for his unorthodox platform -- which will presumably prompt Cain and Santorum to use him as a foil to assert their conservative bona fides, potentially forcing Pawlenty to weigh in on subjects he'd rather sidestep.

* Ron Paul: His presence figures to foster this same dynamic, just as it did in 2007 and 2008 -- when no GOP debate was complete without one candidate using Paul as a punching bag in order to look courageous and principled in the eyes of the party base.

And that's it. No other candidates (or potential candidates) will participate. Mitt Romney is wisely staying away, as is Mike Huckabee. Even Newt Gingrich and Michele Bachmann are keeping their distance. No-shows were not supposed to be an issue when Fox and the South Carolina GOP originally scheduled the debate a few months ago. Back then, it was assumed -- based on recent history -- that the GOP field would be fully formed and the campaign in full swing. But that hasn't happened.

This is partly due to the lack of a clear, overpowering front-runner -- someone whose early polling and endorsement dominance would force other would-be candidates to scramble. It's also a reflection of the GOP's lack of a bench. Besides Romney, Huckabee and Pawlenty, the only other Republican who is flirting with the race and has a realistic chance of winning the nomination is Mitch Daniels. And outside of that pool, there may only be one even remotely plausible dark-horse possibility, New Jersey's Chris Christie, who would need an awful lot of persuading to run.

So Romney and Huckabee, both of whom run near the top of polls anyway, have little incentive to run full-fledged campaigns now; they can hold out -- and avoid debates like tonight's. Pawlenty is in a slightly different position; his popular support is low, but he's a serious candidate because -- unlike Cain, Santorum and the others -- he has the potential to win over the all-important GOP elites, whose support could move his poll numbers fast.  But showing up for tonight's debate probably won't help Pawlenty win over those elites. Do you think they'll be impressed that he can out-debate Herman Cain? (And if he can't even do that ...)

It's hard to see how Fox or the GOP will win by going forward with the debate. But for casual viewers who don't have a rooting interest, it promises to be one of the more entertaining hours in presidential debate history. (Note: Salon's Justin Elliott and Alex Pareene will be live-blogging it here tonight; they'll be joined by former Hotline writer Holly Noe. The fun will start at 8:45 -- and you'll be welcome to join their discussion via Twitter.)

To whet your appetite, please enjoy this video of the closest precedent I can find for tonight's event: the first GOP debate of the 1996 cycle, held in New Hampshire in February 1995. The front-runner, Bob Dole, didn't show up, but ... Robert Dornan, Alan Keyes, Pat Buchanan, Arlen Specter and Lynn Martin all did. (Sorry, C-Span won't let me embed it here, but this is the link.)