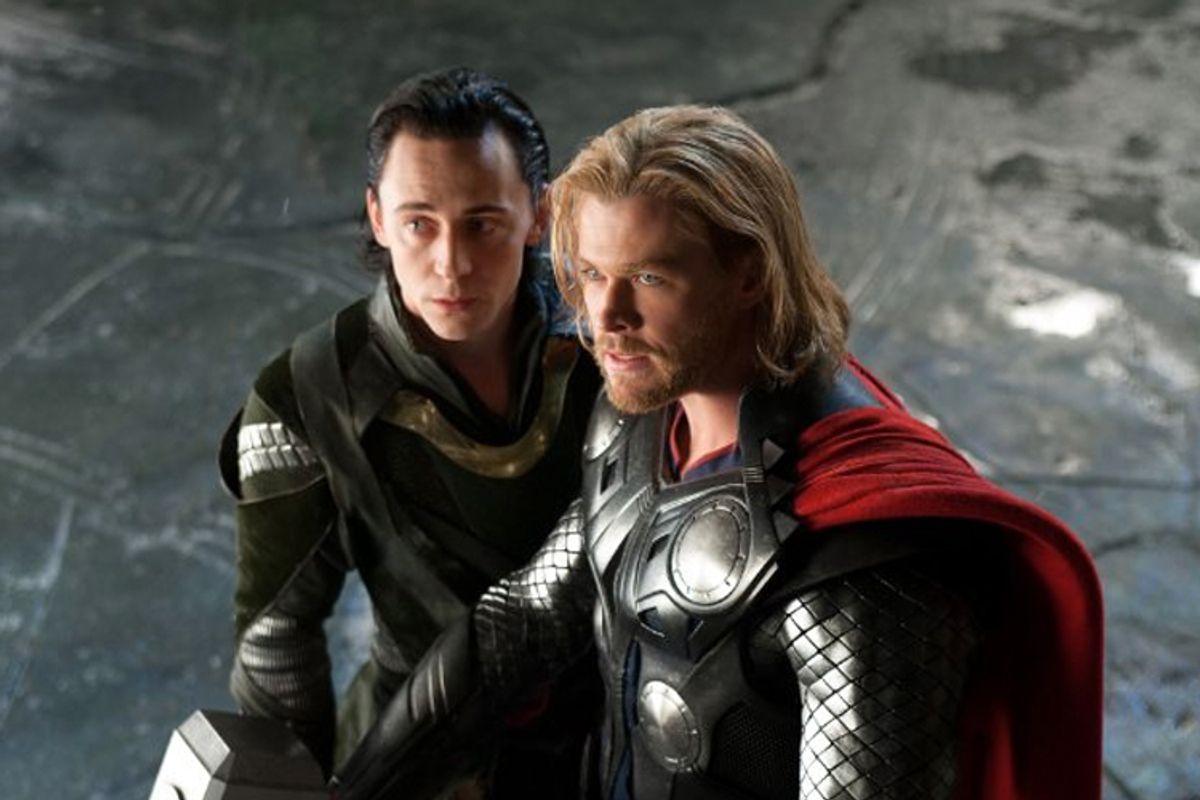 Do we actually want Shakespearean drama, or a simulacrum thereof, in comic-book movies? I think the only reasonable answer is "sort of," and that's exactly what Kenneth Branagh delivers in the massive but middling "Thor," an edge-of-summer tentpole production that delivers the goods, albeit in laborious fashion and at enormous expense. A whole lot of "sort of," dressed up in faintly fascistic regalia. I've got no problem with the continuing viability of the classic Marvel and DC Comics heroes, per se, although it's a little surprising. But their hegemonic control over the many-branched Yggdrasil of pop entertainment is starting to bug me.

A movie like "Thor" isn't just trying to be a popcorn flick for teenagers; in an era where "youth culture" reaches deep into middle age, that's not good enough anymore. It has to evoke the Pop Art colors and muscle-bound iconography of 1960s comics its younger viewers have never seen, incorporate a few plausible pop-science theories and suggest a passing familiarity with both the genuine Norse legends behind the Stan Lee-Jack Kirby comics and the design history of fantasy cinema stretching back to "Metropolis." Its cast features a plural number of Oscar winners and an elevated Anglo-drama sheen; even Aussie hunk Chris Hemsworth, whose resemblance to the 'roid-rage Aryan Thunder God is startling, turns out to be a decent actor. It's supposed to have mind-blowing action scenes, a heart-rending father-son story, a compelling love affair and a Cain vs. Abel fraternal standoff.

Branagh's "Thor" does most of those things fairly well, in fact, and a few of them better than that. I've never felt sure that Branagh was a natural filmmaker, although he's been doing it for quite a while now, but all his projects, on stage or on screen, have a natural bravado about them that's endearing. It simply wouldn't occur to him to treat a fundamentally goofy movie about a Norse god filtered through half a century's worth of American comic books with condescension, any more than he would treat "Coriolanus" that way. But all the brio and high spirits in the world can't conceal the fact that "Thor" is an archetypal Hollywood-franchise mishmash, an "up-converted" 3-D monstrosity with five credited screenwriters and an unbridled ambition to move us along from one episode of the Marvel-Paramount multiverse to the next, siphoning cash from our pockets along the way. (There's still a "Captain America" movie, God help us, before we get to the grand reunion of "The Avengers.") I never felt swept up in "Thor," or lost sight of the fact that I was watching a prepackaged entertainment product meant to be all things to all people. "Iron Man" this ain't.

It'll probably work, or work well enough, despite the fact that Branagh can't direct an action sequence to save his Shakespearean-swordfightin' life and the fact that he begins with a great, gray, greasy lump of expository back story. (On-screen title: "Norway, 956 A.D.") See, before Hemsworth's Thor can arrive on earth to charm the figurative pants off scientist Jane Foster (Natalie Portman) -- their relationship is entirely chaste -- we have to hear all about multiple wars between the gods of Asgard and the Frost Giants of Jotunheim, big blue bruisers led by Colm Feore as the sinister Laufey. There's a thicket of other semi-divine characters too dense to navigate, along with the brutalist CGI architecture of Asgard itself, and how the filmmakers could have spent so much time and money and care on this design and still wound up with something that looks so much like the Albert Speer sketches Hitler jerked off to at night is somewhat mysterious.

But the central dynamic of "Thor" is the relationship between the hot-headed, hot-bodied God of Thunder, his fading but imperious father, Odin (Anthony Hopkins), and second son Loki (British TV and stage actor Tom Hiddleston), the shape-shifting trickster who turns out to be -- oh, that's right, I'm not supposed to tell you. Branagh's completely at home in this kind of inflated family drama, of course, and the three guys yell, sulk and brood in their ridiculous costumes to fine effect. Playing the dying All-Father -- at least in the Marvel Comics version, the Norse gods are not exactly immortal -- sparks Hopkins to his most focused performance in several years, and the slyly enjoyable Hiddleston will not remain unknown on this side of the Atlantic for long.

After leading an ill-fated raid on Jotunheim and breaking the precarious peace with the Frost Giants, Thor is stripped of his mighty hammer and banished to earth, and more specifically to the New Mexico desert, where Jane and her professor (ever-enjoyable Swedish actor Stellan Skarsgård, who doesn't get quite enough to do) are investigating exactly the kind of fringe-physics anomalies that scientists in movies must specialize in. You know: "Could this be the Heisenberg-Kobler conundrum? A hypothetical doorway into another dimension?" Hemsworth is at his best playing Thor as a comic fish out of water, joyously smashing coffee cups on the floor of a diner ("I like this! Bring me another!") or marching into a Main Street pet store and demanding a horse. For all the ass-kicking he administers (and endures), he comes off as a good-natured doofus with an amazing physique.

Audiences aren't getting ripped off here: "Thor" has decent to fine acting, superb production values and a feeling of general bonhomie. But they may feel just slightly diminished; you get the feeling that Branagh is moving through the film cheerfully ticking off boxes: Thor kisses Natalie, check. (But no ass-grabbing!) Thor fights a big black dude and then a giant robot, check. Gag involving Thor and modern conveniences, check. Whooshy high-speed journey over the Las Vegas-looking Rainbow Bridge, check. Scene in Asgard with Loki looking duplicitous and Odin looking dead, check. Semi-sinister government men-in-black types who can do nothing with Thor's hammer, check. Little teaser with Samuel L. Jackson, pimping the next Marvel movie, all the way at the end of the closing credits, check. Saying that "Thor" is half-assed would be too mean to everybody involved; it's three-quarter-assed. It'll be a big hit and it's slightly disappointing. Welcome to summer!