The doomed Air France flight's second black box has been found. Will we get the simple answers we're looking for? 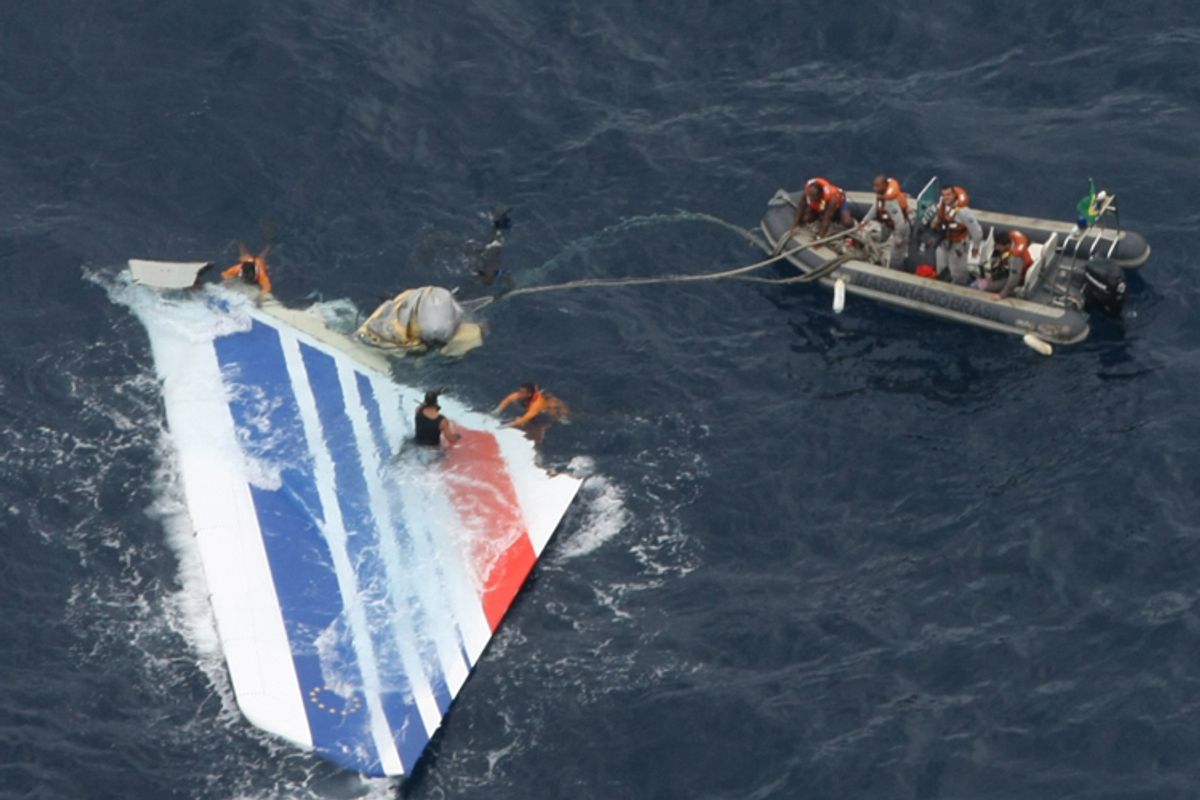 FILE - In this Monday, June 8, 2009 file photo released by Brazil's Air Force, Brazil's Navy sailors recover debris from the missing Air France Flight 447 in the Atlantic Ocean. A year after Air France Flight 447 crashed into the Atlantic ocean, families of some of the 228 victims are demanding Monday May 31, 2010 that the search for the flight recorders, and for answers, continues. (AP Photo/Brazil's Air Force, file) ** NO SALES ** (Anonymous)
--

Earlier this week, a search team dredged up the second of the black boxes from the wreckage of Air France Flight 447 -- the Airbus A330 that crashed into the Atlantic nearly two years ago during a flight from Rio de Janeiro to Paris, killing 228 people. With the voice and data recorders finally on hand -- provided that critical data remains intact after spending 23 months beneath two miles of seawater -- investigators are on the verge of solving one of modern aviation's most perplexing disasters.

What makes this such a tough and perhaps unsatisfying story, however, is that the "cause" of the accident won't be anything simple. People want an easy, all-in-one explanation: Turbulence crashed the plane. A sensor malfunction crashed the plane. The pilots "lost control." But it won't be any of those things. Or, more correctly, it's liable to be all of them, laced together in a cascade of events that was as complicated as it was unlikely. The technical aspects alone are something we could talk about all day. The air data sensors on an Airbus A330 are not the same as those on a Cessna.

Kudos, meanwhile, to reporter Wil S. Hylton, whose piece in Sunday's New York Times Magazine is one of the most thorough explorations yet of this strange disaster.

One aspect of his story, though, needs to be pulled out and clarified. Hylton writes:

"For a passenger jet like the A330, the ideal cruising speed is about 560 miles per hour. If you go much faster, the center of lift moves back on the wing, pushing the nose down and increasing velocity, until you soon approach the speed of sound. At that point, shockwaves develop on the wings, interrupting the flow of air and reducing lift. The nose of the plane then gets forced into a dive that the pilot may not be able to pull out of. Then again, if you go too slow, the airplane stalls and falls. A plane must maintain a minimum speed to generate lift, and the higher it travels, the faster it must go. At 35,000 feet, the gap between too fast and too slow narrows ever closer. Pilots call it coffin corner."

In an earlier column on Salon, I described the same phenomenon like this:

A plane stalls when, roughly put, the wing runs out of lift. Not only are there low-speed stalls, but high-speed "shock stalls" as well: As airflow over the wing nears the speed of sound, a shock wave builds, separating the airflow and disrupting lift. Thus, at upper altitudes, where the air is very thin, we find an aerodynamic paradox: The higher a plane flies, the faster it needs to go to maintain lift; but the faster it goes, the closer it gets to that shock wave. You're stuck between going too fast and too slow at (almost) the same time.

Much has been made about "coffin corner" in the wake of the 447 disaster -- most of it misleading. A "Nova" special on the crash featured a pilot commenting that the buffet margin during cruise flight can be as thin as 10 knots. I've since received numerous letters from people wondering how this could be; they're both mesmerized and frightened by the idea that a jetliner at 35,000 feet is literally on the verge of disaster.

Except that it's not. While it's possible that the A330 succumbed to a high-speed stall or partial loss of control -- in response to an upset brought on by severe turbulence and loss of instruments and control authority -- its margins at 35,000 feet would have been considerably greater than 10 knots, and the jet was nowhere near coffin corner. Jets are engineered to fly at high altitudes, and have been doing so safely for more than 50 years. This proverbial razor's edge is only relevant at a point well beyond the average jetliner's performance envelope. Coffin corner is not where commercial airliners hang around.

Although the recorders have been found, we continue to hear about the supposed obsolescence of the traditional "black box." Considering the capabilities of modern electronic communications, why are planes unable to provide continuous transmission of voice and data to be recorded remotely? This is something I addressed a couple of years ago, but that bears repeating.

For starters, developing this technology would be very costly and then seldom useful. Crashes are rare enough; crashes in which the recorders are unrecoverable even more so.

Transmitting such data also would require tremendous bandwidth. "Two hundred and fifty six individual data streams are recorded by the flight data recorder of a modern jet," notes Christine Negroni, an aviation journalist and air safety specialist who has written a book on air crash forensics. "Plus the recording of the conversations and other sounds in the cockpit.

"Given how quickly communication and digital technology are evolving, it’s feasible that soon it would be manageable to transmit this information using VHF radio frequencies when an airplane is in radio receiving range, but what about flights over remote areas or over water [as the Air France flight was]? Communicating this data would require streaming via satellite, and that would be hugely expensive.

"And where would all this information be stored? There are tens of thousands of commercial flights daily. And even for that one crash in 2 million flights, there's rarely a need for external recording."

Negroni also points out that some essential parameters already are streamed, via an onboard communications device called ACARS.