The politics of selfishness

David Brooks is right: Special interests paralyze Washington. But he lionizes those who fixed the game for the rich 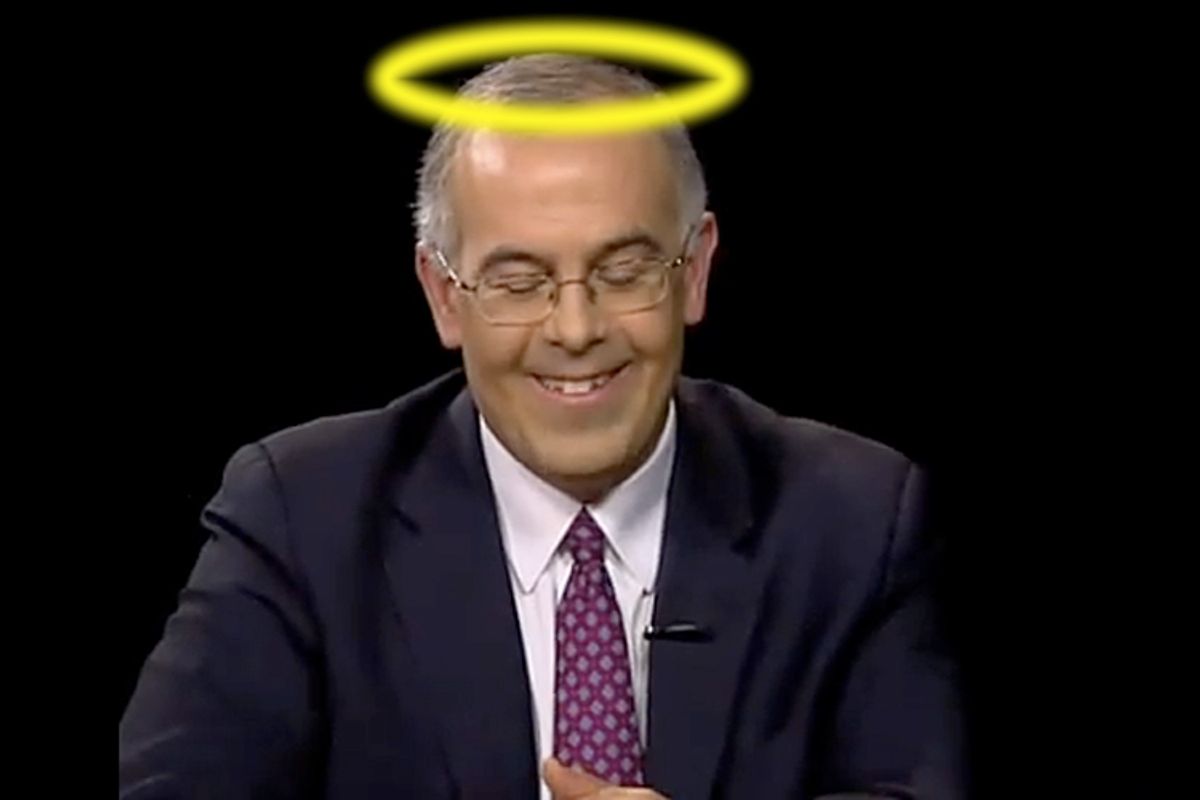 Life is too short to refute every silly David Brooks column, but Friday's meditation on "The Politics of Solipsism" is so backward, I couldn't ignore it. Brooks writes about something I've been thinking about a lot lately: today's hyper-partisanship, and the related inability to solve the country's big problems. But the twisted way Brooks identifies its causes makes me worry he has a kind of political or moral dyslexia. The big tell that Brooks has it bollixed is his quoting the late neoconservative Irving Kristol lamenting the politics of not only solipsism, but selfishness – when Kristol was one of the leading thinkers and rabble-rousers behind that sea-change in American political life.

Brooks quotes Kristol on the loss of true "public spiritedness," which Kristol defined as "curbing one's passions and moderating one's opinions in order to achieve a large consensus that will ensure domestic tranquility." Both men seem to hark back to a golden age when political and opinion leaders tried to balance the competing interests of different groups -- labor and business, and the wealthy and the struggling, mainly -- and in fact, there actually was an era like that. But Kristol played a central role in halting it, in rewriting that notion of public spiritedness and laying the intellectual foundations for the bitter class warfare -- the haves attacking the have-nots -- that over the last 30 years brought us the neo-Gilded Age economy we have now.

For most of the 20th century -- arguably since the Gilded Age, and certainly after the New Deal -- there was a bipartisan tradition of elites looking to harmonize the interests of labor and capital, to protect capitalism by blunting its sharpest edges, stoking consumer demand with decent wages, and making sure workers weren't miserable enough to rebel. Groups like the Twentieth Century Fund and the Committee on Economic Development brought together scholars, CEOs, union leaders and other civic-minded folks to use research, data and reason to address the social and political challenges of the day. The foundations established by robber barons and other corporate titans, like Carnegie, Ford and Rockefeller, similarly saw themselves as mediating institutions, above the partisan fray but with a concern for the public interest. Of course, none of those groups, or the era's think tanks like the Brookings Institution or the Rand Corp., succeeded in absolute fairness and objectivity: Some tilted left, some right, some each way at different times, depending on the issue. But there was an ethic of "public-spiritedness" that is much scarcer today -- and that's because the American right did its best to eradicate it, led by thinkers like Kristol.

In the 1970s corporate America began a conscious and well-funded effort to roll back the gains of the 1960s, undermine labor unions, beat back business regulations and slash taxes, and Kristol was at the heart of it. The former liberal attacked foundations for funding anti-corporate groups, and urged them to invest in their own think tanks and interest groups. "When you give away your stockholders' money, your philanthropy must serve the longer-term interests of the corporation. Corporate philanthropy should not be, and cannot be, disinterested." That doesn't sound terribly public-spirited to me.

In his great book "The Paradox of American Democracy," John Judis charts Kristol's influence. "Kristol's recommendations on corporate philanthropy ran directly counter to the historic assumptions that had motivated American elites, but in the midst of the renewed class struggle of the 1970s, they found a receptive audience." In the late 70s, Nixon Treasury Secretary and stockbroker William Simon proclaimed, "The only thing that can save the Republican Party ... is a counterintelligentsia," and he quoted Kristol to justify his plan to nurture a web of writers and social scientists to fight 'the dominant socialist-statist-collectivist' orthodoxy" he believed ran Washington, think tanks and the media.

Simon took over the right-wing Olin Foundation, the Business Roundtable joined the fray, and the Heritage Foundation and the American Enterprise Institute challenged groups like the centrist Brookings Institution (and smeared it as representing the left.) Corporate America stepped up its presence in Washington as well. The number of businesses with lobbying (or "public affairs") offices in Washington grew from 100 in 1968 to over 500 in 1978; the number of corporate PACs jumped from less than 300 in 1976 to more than 1,200 in 1980. In the early '70s, labor PACs outspent business PACs in congressional races; by the mid-'70s, they were about equal and by 1980, business PACs pulled into the lead, to stay. That year unions represented less than a quarter of PAC spending, down from half in 1974.

Their assault on labor throughout the '70s was remarkable and unrelenting. Jefferson Cowie's "Stayin' Alive" provides a sobering rundown: In the early 1950s, workers filed about 3,000 complaints about dismissal for union activity with the National Labor Relations Board; by 1980, the number was over 18,000. At its heyday organized labor had won two-thirds of workplace votes to unionize; by the end of the '70s they were losing most of them. Workers were de-unionizing at an astonishing pace: 583 workplaces voted out their unions in 1978-79, 20 times the number of the early '50s. But it wasn't spontaneous worker revolt, only this time against and not for unions; at a time of economic stagnation, one brand-new industry boomed: management consultants advising how to bust unions or keep them out -- legally, when possible; surreptitiously, when not. And of course, the pace accelerated under Ronald Reagan: In the mid-'70s, under Gerald Ford, the National Labor Relations Board sided with business 35 percent of the time, according to John Judis; in the early '80s, that jumped to 72 percent. And of course, the percentage of workers represented by unions dropped from a high of 35 percent in 1955 to less than 25 percent in the mid-'70s and continued to decline, to only about 12 percent today (it's only 7 percent of private sector workers).

The result was the disfigured American political and economic landscape we have today. The wages of non-supervisory workers stagnated in 1973, and then declined. The income gap, which had narrowed in the decades after World War II, began to widen again, and it's now wider than any time since 1929, on the eve of the Great Depression. The tax overhauls pushed by Bush and Reagan meant that 40 percent of the country's wealth is now held by the top 1 percent. Unemployment, stuck at 9 percent, is today hailed as good news, because at least the economy seems to be creating jobs -- but the new jobs can't make up for the jobs lost in the public sector, as a new bipartisan consensus focuses on the deficit at the expense of the unemployed. Brooks doesn't seem to understand that his team's notion of "public spiritedness" has prevailed, even if the deficit isn't being slashed as much as he'd like.

To be fair to Brooks, he identifies growing social inequality as one of the big problems our current political paralysis can't seem to address. But his answer makes no sense: "The political culture encourages politicians and activists to imagine that the country’s problems would be solved if other people’s interests and values magically disappeared," he worries. "Voters will have to embrace institutional arrangements that restrain their desire to spend on themselves right now."

But in fact, only one side -- Irving Kristol's -- behaved as if the country would be better off if other people's interests magically disappeared, and he and his friends did their best to make that happen. Right now, the voters who need to restrain their desire to spend on themselves are the uber-rich. Brooks even praises Paul Ryan's budget as representing "progress in getting Americans to accept the need for self-restraint," when Ryan would increase the deficit, not shrink it, with more budget-busting tax cuts.

As always in the GOP universe, it seems the only people who should practice self-restraint are unions, working people and low-income families who depend on social services. The most glaring solipsism evident today is Brooks' own.