With Medicare retreat, GOP raises the stakes for '12 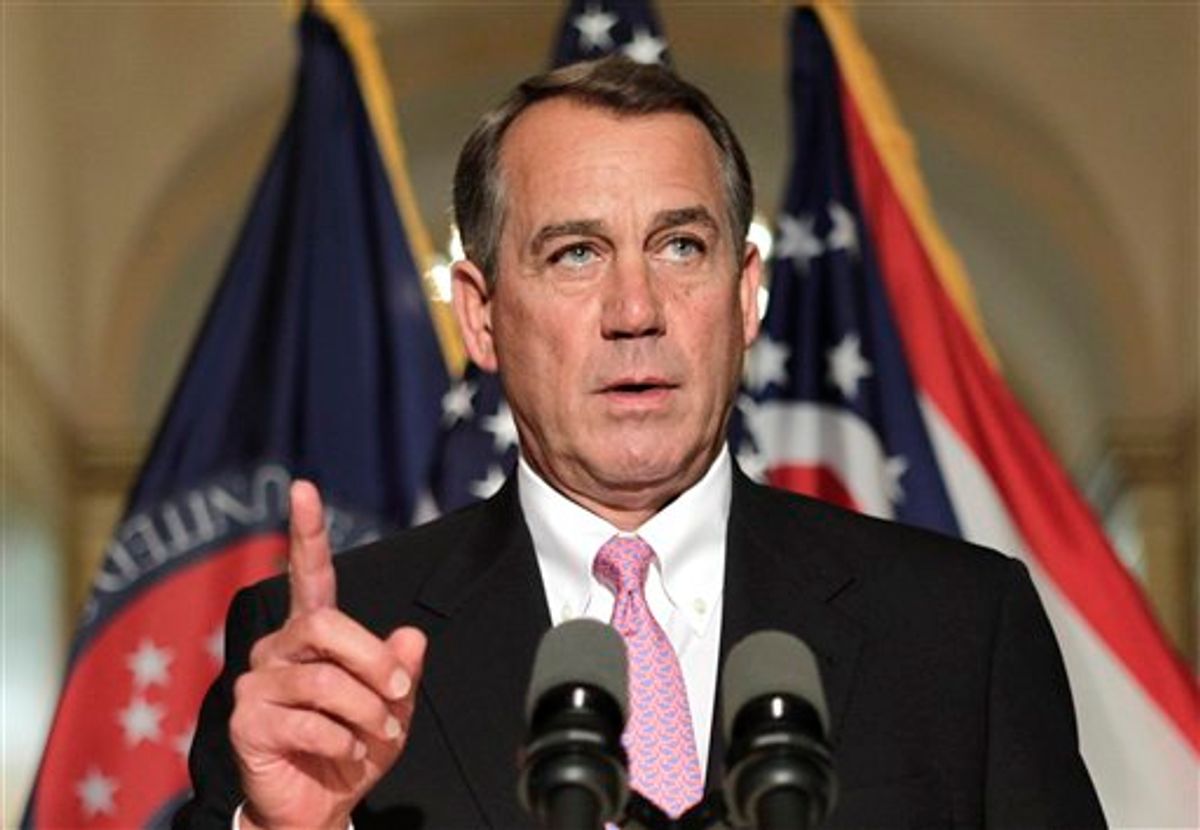 Just three weeks after nearly every Republican in the House went on record in support of it, congressional Republicans are now walking away from a plan that would end Medicare as it currently exists.

The official explanation, offered by Michigan Rep. Dave Camp (who chairs the Ways and Means Committee, through which any Medicare overhaul would have to pass), is that pressing forward would represent a pointless act of posturing, since the plan has zero chance of clearing the Democratic-controlled Senate.

That's certainly true -- but it was just as true (and obvious) when the House GOP lined up behind the Medicare-ending blueprint in mid-April.  All that's happened between then and now is that Republicans have endured a predictable series of aggressive attacks from Democrats for attempting to do away with a program that is immensely popular with voters (attacks that will almost certainly continue through next year's election). So why did they do it in the first place?

The most reasonable explanation is that they had to. From a general election standpoint, last month's vote was potentially suicidal for the GOP brand and for individual House incumbents in competitive districts. But from a primary election standpoint, it was potentially helpful -- if not necessary -- for the survival of all of the GOP lawmakers who backed it. As we saw in last year's primaries, the Republican Party base in the Obama era is a restive bunch, unimpressed with incumbency and establishment credentials and vigilant against sellouts. The Medicare overhaul, which would replace the current program with vouchers that could be used to purchase private coverage, represents precisely the type of legislation that the GOP base now insists its elected officials embrace.

For Speaker John Boehner, this made it essential that he at least take some action and put the basic plan up for a vote; failing to do so might have inflamed the GOP base, which in turn could have jeopardized Boehner's grip on the GOP caucus (which wasn't exactly weak, but was hardly that strong when this Congress began). And for rank-and-file GOP members, it meant voting "yes" when Boehner put the blueprint up for a vote. Some of them probably wanted to do this anyway (the House GOP conference is littered with ideological true believers, many of whom represent safely Republican districts in which it's impossible for a congressman to cast a "bad" general election vote), but many Republicans from swing districts probably felt squeamish. But the memory of 2010 -- when GOP primary voters across the country delivered some shocking results in the name of ideological purity -- compelled them to go along, lest they fall victim to primary challenges next year.

So even if it was bad for the party -- and some individual members -- in the long run, voting on Ryan's Medicare plan was probably, on balance, something that House Republicans had to do. Now they can say they tried and that they took heat for doing so, and it will be far easier for conservative opinion-shapers to accept the idea that the Medicare overhaul has died because of Democratic obstruction -- not Republican cowardice.

Of course, the overhaul isn't really dead -- at least not yet. The GOP is calculating that it has handled the Medicare issue in a way that will minimize the political fallout in November '12. They put their plan forward and voted on it, took three weeks of grief, and are now withdrawing it. The idea is that this will all be forgotten by voters 18 months from now, and that Democrats will have little luck reviving the issue. Expect to see Republicans up and down the ballot next year pretending none of this ever happened.

But if the 2012 election goes their way, it will all come back in a hurry. Look at it this way: Despite the Democrats' bluster now, the House is likely to remain in GOP hands after next year's election, even if Barack Obama ends up winning a decisive victory. Even when Ronald Reagan in 1984 and Richard Nixon in 1972 were reelected in landslides, they had little in the way of coattails. Then there's the Senate. Right now, Democrats have a 53-47 majority, but they will be defending far more vulnerable seats than the GOP next year; while it's no sure thing, a Republican takeover is entirely plausible, maybe even likely.

In other words, it may well be the presidential race that decides the fate of the GOP's Medicare scheme. If a Republican manages to unseat Obama next year, the odds are good that he will come to power with majorities in both congressional chambers. Then, the GOP will actually be in position to move its plan through Congress and into law. Whether they'd succeed in doing so is far from clear; even with House and Senate majorities in 2005, George W. Bush couldn't push his Social Security overhaul through. But the potential would exist and the plan that the GOP is "dropping" right now would be very much alive -- even if no Republican mentions it between now and 2012.