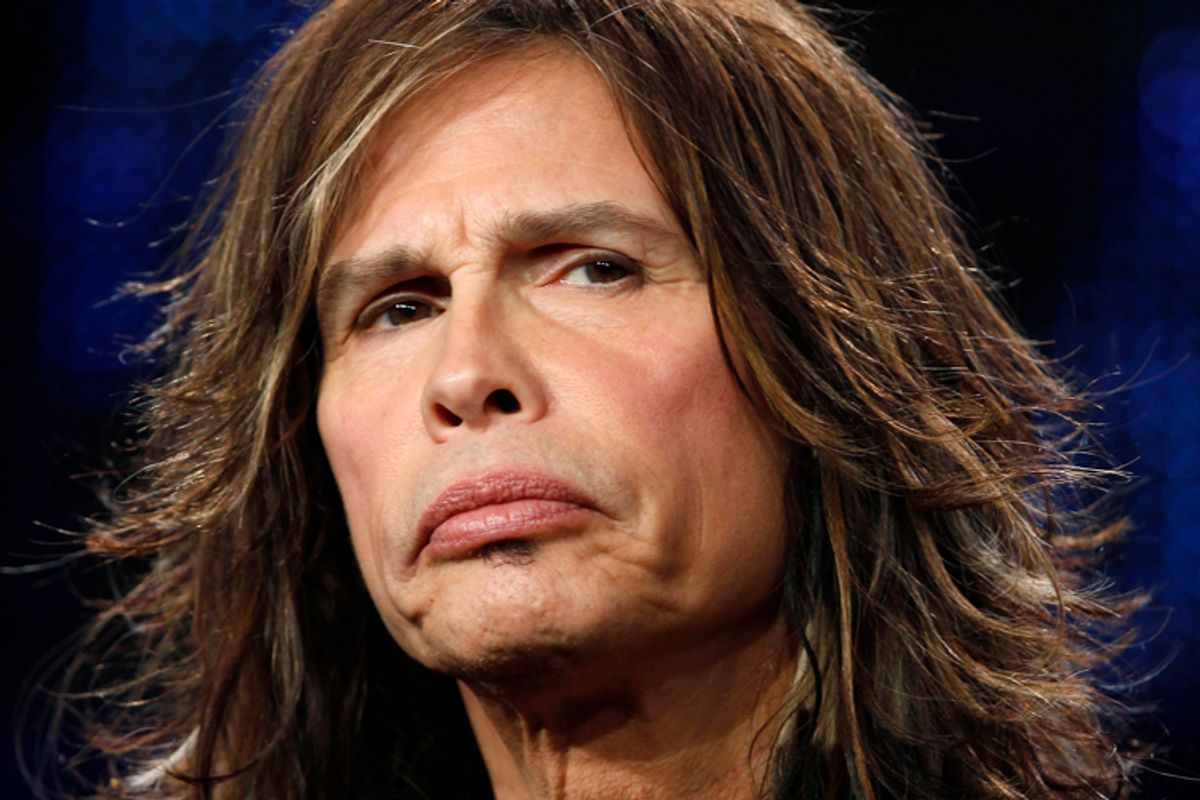 In the annals of individuals dragged unwittingly into the anti-choice movement, you can now add an even unlikelier one than that kid in the SoHo billboard: Steven Tyler. And that's not even the weird part.

In a story headlined "Post-Abortion Trauma" for the National Review, writer Kevin Burke  weaves a tale gleaned from Aerosmith's collaborative 2003 group "autobiography," "Walk This Way," which describes the singer and "Idol" judge's doomed, '70s-era relationship and the abortion that triggered its end. Burke, cofounder of a ministry dedicated to "healing the pain of abortion," sets up the story: "In 1975, when he was in his late 20s and the lead singer for the band Aerosmith, Tyler persuaded the parents of his 14-year-old girlfriend, Julia Holcomb, to make him her legal guardian so that they could live together in Boston." But eventually Holcomb -- who appears under the pseudonym Diana in the book -- found herself pregnant. Burke quotes Tyler's friend Ray Tabano, from the book: "So they had the abortion, and it really messed Steven up because it was a boy. He ... saw the whole thing." He then quotes Tyler: "You go to the doctor and they put the needle in her belly and they squeeze the stuff in and you watch. And it comes out dead. I was pretty devastated. In my mind, I'm going, Jesus, what have I done?"

It's a vivid and no doubt unnerving memory, one that conveniently leads Burke to launch into an explanation of how "the reality of abortion fits the textbook definition of trauma." He backs that claim up with Tyler's own admission that "It affected me later when I tried to get my real wife pregnant. I was afraid. I thought we'd give birth to a six-headed cow because of what I'd done with other women. The real life guilt was very traumatic for me."

Could Tyler indeed have been suffering grief for the boy he didn't have? (No word on whether he'd have been equally broken up over a daughter.) Could that loss have been part of what fueled his notoriously bad behavior for the next decade? It's certainly fair to say that abortion isn't exactly a skip through the park for even the most devoutly pro-choice couple. It's a complicated act, often fraught with conflicting emotions -- even if it's highly unlikely that Aerosmith's legendary exploits could be pinned on one terminated pregnancy.

But forget laying blame for Steven Tyler's epic drug and alcohol abuse on abortion. In fact, let's back the hell up for a moment on Burke's call for Tyler to "use his considerable talent and influence to call other post-abortive fathers to healing." Instead, let's wonder why Burke doesn't seem to have a whole lot of opinions about how Holcomb might have viewed the decision (aside from extrapolating from Tyler ex-girlfriend Bebe Buell's remembrance that Holcomb was distraught about "this purportedly psychologically safe procedure" instead of her dissolving relationship).

Though Burke clearly knows his way around the 8-year-old Aerosmith book, he leaves out Tyler's purring admission that "Diana" was "much younger than me, like fourteen when I met her ... She was so young, so skinny, really beautiful." He neglects the part where the girl has to go to the hospital, "badly burned" after falling asleep with a cigarette, and Tyler's observation that "she was really too young to leave alone at home." He omits Tyler's recollection of her "sixteen and pregnant ... there'd already been abortions with her." There's nothing of publicist Laura Kaufman's recollection that Tyler "dressed her up as Little Bo Peep, made her wear outfits, for God's sake, little schoolgirl frocks." Ah, the '70s, when giving away your pubescent daughter so she could get knocked up in a Bo Peep costume wasn't such a big deal.

The willful ignorance of Burke's piece would almost be amusing if it didn't go right to the heart of the far right's ongoing concern trolling about abortion. Whether the story takes place in 1975 or 2011, there's no understanding that a teenager who is "getting real high" a lot and is in a situation that can best be described as wildly sexually exploitive may not be cut out yet for motherhood. And just to recap: The National Review will happily give editorial space for a decades-old story of a rock star repeatedly impregnating a teenage girl and make it about how  sad the experience made the rock star, and ergo how this proves abortion is bad. Excuse me, but this calls for all caps. WOW.

It may well be that Steven Tyler -- and Julia Holcomb, for that matter -- felt lingering sadness post-abortion. Reproductive freedom isn't a guarantee against ambivalence. That in no way makes it the worst possible choice, given their lives and options at the time. And if you want to talk about "the textbook definition of trauma," Kevin Burke, go back and read through "Diana's" story again. And this time, try it not with a fake concern about the child she didn't have, but with a shred of empathy for the very young, very used one she herself once was.