Why Washington should pay attention to the economy here and now 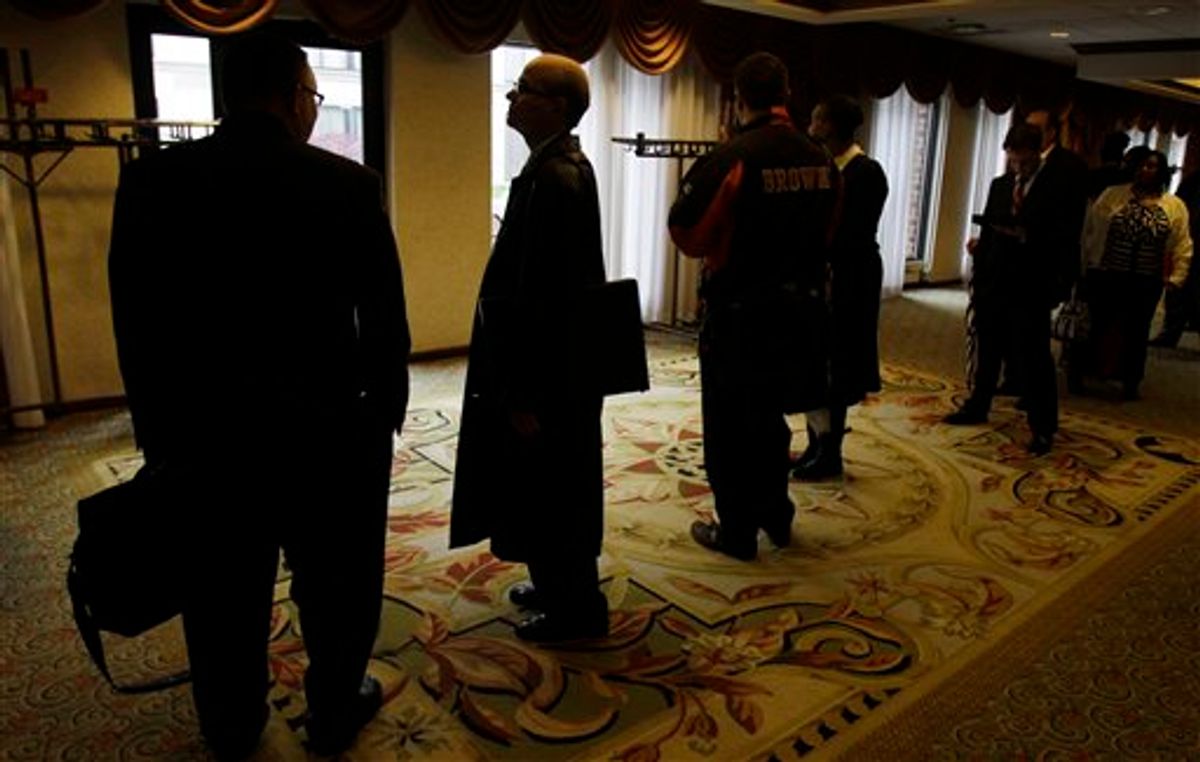 In this May 3, 2011 photo, job seekers wait in line for a job fair to open, in Independence, Ohio. The number of Americans applying for unemployment benefits surged last week to the highest level in eight months, a sign the job market may be weakening.(AP Photo/Tony Dejak) (AP)
--

After a week of non-stop Osama Bin Laden, Washington is now returning to the battle of the budget deficit and debt ceiling.

All over Capitol Hill Republicans and Democrats are debating spending caps and automatic triggers, and whether to begin them before or after Election Day.

But if you don't mind my asking, what about the economy? I'm not talking about the economy five or ten years from now, when projections show the federal budget wildly out of control or when foreigners might start dumping dollars.

I'm talking about the here and now economy -- the one Americans are living in day to day.

The Labor Department reported today that unemployment for April was 9 percent, up from 8.8 percent in March. And that doesn't count people working part-time who'd rather have full-time jobs.

Yes, 244,000 jobs were added in March -- but that's chicken feed. We'd need 350,000 a month, every month for the next three years, simply to get back to where we were before the Great Recession.

And the percent of working-age Americans actually working -- 64.2 percent -- hasn't improved. It's almost as low as it was in the depths of the recession. 13.7 million people remain out of work.

Even for Americans with jobs, wages are going nowhere. Basically, the only employers hiring are paying peanuts. McDonalds just announced it would start hiring big time.

In the first quarter of this year the U.S. economy slowed to a crawl -- a measly 1.8 percent annualized growth -- down from over 3 percent last fall. Higher gas and food prices are putting even more squeeze on American households.

And housing prices continue to drop.

Washington is fighting over how much to cut spending over the next ten or twelve years.

But right now we need more public spending to get people back to work, stronger safety nets to help those who have lost their jobs or can't find new ones, lower payroll taxes on average workers, and a requirement that Wall Street banks renegotiate mortgage loans so Americans can keep their homes.

Why isn't Washington paying attention to what most Americans need in the here-and-now economy?

Because the White House and congressional Democrats don't dare admit how bad the economy continues to be for so many people. They're holding their breath, hoping the recovery catches fire next year before Election Day.

Republicans don't dare admit how bad the economy is because they don't want to increase public spending or strengthen safety nets. And their patrons on Wall Street don't want to modify mortgages. Republicans would rather Americans believe their big lie that taming the deficit will create jobs and restore the economy.

So Washington would rather fight over the long-term budget, spending caps, taxes, and trigger mechanisms than do something about the pain most Americans are experiencing today.

But the here-and-now economy the most important thing on Americans' minds.

Ironically, Washington's disregard for what's happening right now is also worsening the long-term budget problem. That problem is not the debt per se; it's the ratio of debt to the overall economy. If the economy sputters or continues to grow at a snail's pace, that ratio becomes worse and worse.

In other words, attending to the here-and-now economy is also good for the future.

Earth to Washington: Listen to America.