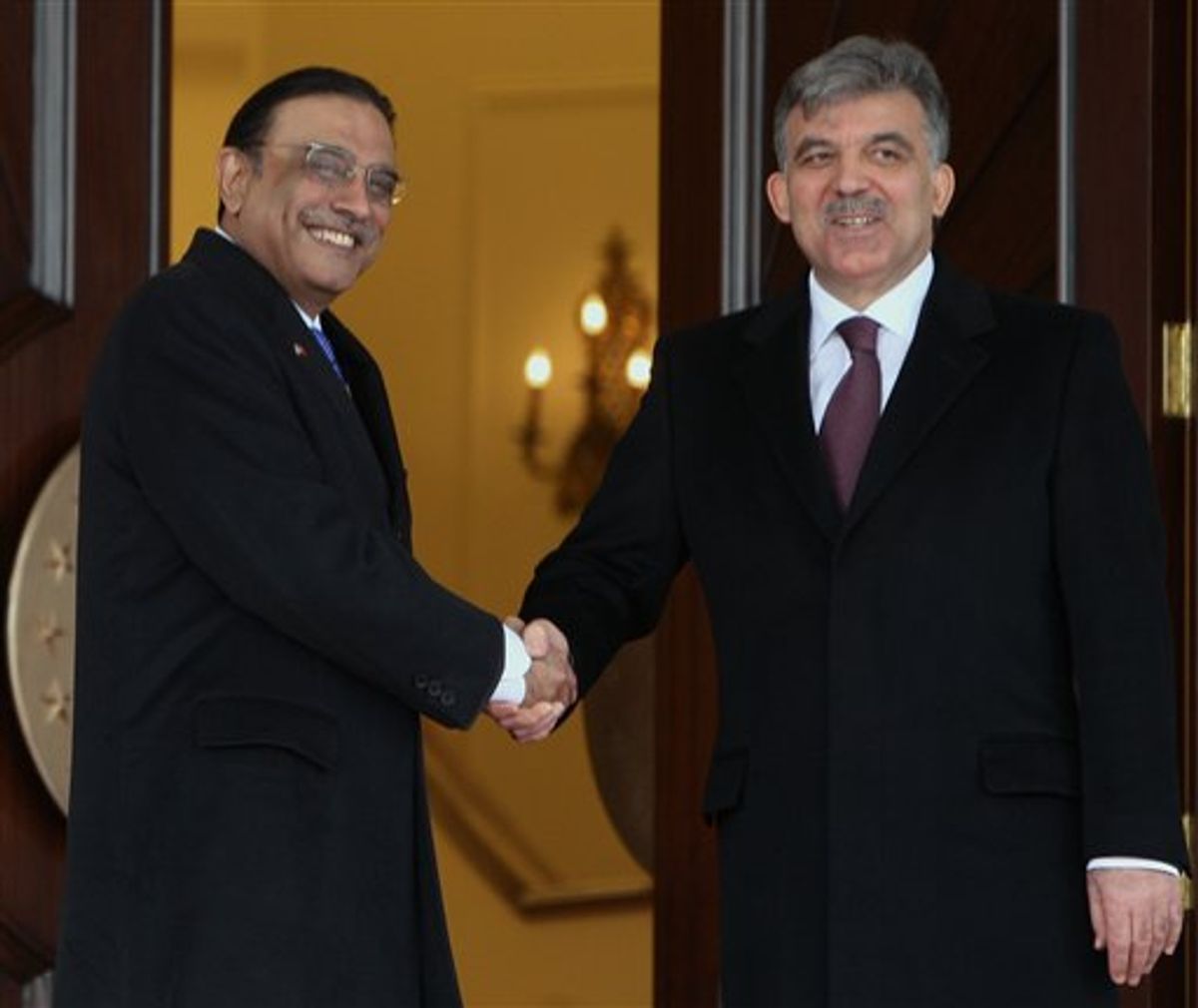 Pakistan's President Asif Ali Zardari, left, and his Turkish counterpart Abdullah Gul shake hands as they pose for cameras during a ceremony at the Cankaya presidential palace in Ankara, Turkey, Wednesday, April 13, 2011. Zardari is in Turkey for a four-day state visit.(AP Photo/Burhan Ozbilici) (AP)
--

Prominent Pakistani lawmakers called for President Asif Ali Zardari and other senior government officials to resign Saturday after the American raid that killed Osama bin Laden and embarrassed the nation.

The demands followed a week in which countless questions swirled about how much the Pakistani government knew about bin Laden's hiding place and why the military was powerless to prevent U.S. commandos from helicoptering into the country to kill the al-Qaida chief.

Pakistani officials have said they were totally in the dark, a hard thing for many Pakistanis to believe since bin Laden was holed up in Abbottabad, an army town only two and a half hours' drive from the capital, Islamabad.

Former Foreign Minister Shah Mahmood Qureshi, who is now a lawmaker for the ruling Pakistan People's Party, fixed the blame squarely on Zardari and Prime Minister Yousuf Raza Gilani -- likely motivated in part by past conflict with the two men.

"This is a great violation of our sovereignty, but it is for the president and prime minister to resign and no one else," Qureshi told reporters in the central Pakistani city of Lahore.

Chaudhry Nisar Ali Khan, the main opposition leader in parliament, said the country's powerful army and intelligence chiefs should also step down. They are believed to control the real levers of power in Pakistan.

"All from top to bottom who are responsible should take responsibility, and I believe that after such a big tragedy, they should resign," Khan told reporters in Lahore. "This is a call coming from every street of Pakistan."

But it is unclear whether anyone will be forced to step down. The Pakistani government is viewed by many in the country as totally unresponsive to the many woes plaguing the nation, from a struggling economy to frequent terrorist attacks.

"It is not time to sprinkle salt on wounds," said Pakistan's Information Minister Firdous Aashiq Awan when asked about the calls for senior officials to resign. "It is time to apply ointment on the nation's wounds."

The Pakistani military on Saturday denied reports that Pakistan's spy chief, Gen. Ahmed Shuja Pasha, planned to resign in the wake of the U.S. raid on Monday that killed bin Laden.

Pasha is the head of the Inter-Services Intelligence agency, which says it was unaware bin Laden was hiding in Abbottabad for up to six years and has been criticized.

The head of Pakistan's army, Gen. Ashfaq Kayani, met with Zardari, Gilani and other senior officials in Islamabad on Saturday to discuss the raid, said the prime minister's office. Gilani plans to brief parliament about the bin Laden raid on Monday.

It is unclear where bin Laden was located before he moved to Abbottabad. Residents of Chak Shah Mohammad, a sparsely populated village close to Abbottabad, denied reports Saturday that bin Laden had lived there for two and a half years with his family before moving to Abbottabad.

"I don't think the kind of people you and the intelligence agencies are looking for are here or have ever lived here," said Mohammad Shazad Awan, a former army soldier who has driven a public minibus in the area for the last 12 years.

But residents of Abbottabad were also not aware that bin Laden had been living there for such a long time.

Awan, who said he works on the side as an informant for the government, said many Pakistani intelligence operatives were in Chak Shah Mohammad on Friday asking whether bin Laden had lived there.

The New York Times reported that bin Laden and his family lived in Chak Shah Mohammad. The paper quoted unidentified Pakistani officials as saying the information came from one of bin Laden's three wives who was picked up from his compound after the raid.

A senior Pakistani intelligence official said he could neither confirm nor deny the report. He spoke on condition of anonymity in line with the agency's policy.

Qureshi, the former foreign minister, said Pakistan's parliament should conduct an inquiry into the raid in Abbottabad. Qureshi is now a lawmaker for the governing party but has clashed with party leaders ever since he was pushed out as foreign minister in February.

Qureshi has said he was forced to resign because of his comments on the case of Raymond Allen Davis, a CIA contractor who shot and killed two Pakistanis in January in Lahore, apparently in self-defense. Qureshi insisted Davis did not have blanket diplomatic immunity, but he was ultimately released after the families of the victims were compensated.

Political analyst Hasan Askari Rizvi said Qureshi likely called for Zardari and Gilani to resign because he was angry with the leadership of the ruling party and wanted to score political points.

Rizvi called Qureshi's comments "unfortunate" in an interview with Express 24/7 TV because they came at a time when national unity is needed in the face of mounting problems over the killing of bin Laden on Pakistani soil.

But many Pakistanis are also outraged over the raid and demand government officials be held accountable.

"Zardari must admit that he is no longer capable of running the country," said Rasheed Ahmad, a 42-year-old college professor in the central city of Multan. "Our armed forces leaders are equally responsible for this crime."

Rizvi, the analyst, said the government has handled the situation poorly.

Both the U.S. and Pakistan need to stop issuing hard-hitting public statements about the raid because continued fights over the events surrounding bin Laden's death will undermine vital counterterrorism cooperation, he said.

U.S. officials have questioned how bin Laden could have stayed hidden in Abbottabad without Pakistan's knowledge. The Pakistani army, in turn, has blasted the U.S. for violating the country's sovereignty and has warned that any similar raids will prompt Islamabad to reevaluate its relationship with Washington.

The U.S. relies on Pakistan as a key ally in the Afghan war, although American officials have repeatedly criticized the country for failing to target Taliban militants who use its territory to launch cross-border attacks on foreign forces in Afghanistan.